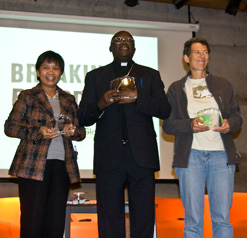 Malou Mangahas of the Philippines,
Archbishop John Baptist Odama of Uganda
and Brenda Burrell of Zimbabwe accepted
the Breaking Borders award on behalf of
their organisations in Santiago, Chile.

Two African organisations are among the three winners of the inaugural Breaking Borders awards, given by Google and alternative media group Global Voices to those fighting for free expression via the internet and other technology platforms.

The winners are Kubatana.net from Zimbabwe in the advocacy category, Uganda’s Battery Operated Systems for Community Outreach (Bosco) for technology, and the Philippines Center for Investigative Journalism for policy.

Supported by Thomson Reuters, the awards honour groups who use the internet to give voice to those once silenced, make the activities of governments more transparent, and standing up for the rights of dissidents.

Global Voices is a community of more than 300 bloggers and translators around the world who work together to bring you reports from blogs and citizen media everywhere, with emphasis on voices that are not ordinarily heard in international mainstream media.

The winners were announced in Santiago on 6 May at the Global Voices Summit, a gathering of internet activists from 60 countries have gathered. The awards were launched on 3 November 2009, when Google and others marked the 20th anniversary of the fall of the Berlin Wall, with the aim of celebrating how the internet has become a vital ally in worldwide efforts to advance freedom and political change.

“This is particularly true at a time when dissidents, journalists and bloggers remain under severe pressure in the online and offline worlds,” Bob Boorstin, Google’s director of public policy, said in a statement.

An international jury of experts reviewed nominations from around the world and chose the awardees in three categories: advocacy, technology and policy. Each group wins a US$10 000 (R75 000) grant to further their work.

An online community for Zimbabwean activists, Kubatana uses the internet, email, SMS, blogs and print materials to broadcast information to the public. Cited for its extraordinary contributions while operating under in a tense and dangerous political atmosphere, Kubatana’s contributions also include an online library of more than 16 000 human rights and civic reports together with a directory listing over 240 NGOs.

Beyond its significance as a resource for information on Zimbabwe, Kubatana has also developed Freedom Fone, innovative software that marries the mobile phone to audio voice menus and SMS to give citizens new ways to communicate.

Bosco was cited for its tremendously effective and creative use of long-existing technology to foster social and economic development and peace building in rural communities of northern Uganda.

An independent, not-for-profit media agency, the PCIJ was founded by nine Filipino journalists in 1989 – with borrowed office space, an old-DOS-based computer, a second-hand electric typewriter, and office furniture bought from a thrift shop – to promote the values of investigative reporting in fostering good governance, freedom of expression, and the people’s right to know.

In 20 years, the PCIJ has produced 500 investigative reports, two dozen books on journalism and governance, five full-length films and dozens of video documentaries. It has conducted a hundred training seminars for journalists in the Philippines and Southeast Asia, and won over 120 national and international awards.