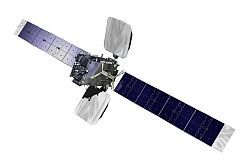 Satellite Intelsat New Dawn will blast
off to space on 29 March.
(Image: Intelsat) 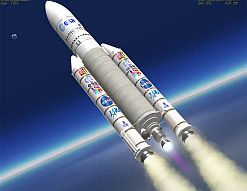 The countdown to the launch of Africa’s first private-sector-owned communications satellite, Intelsat New Dawn, has begun in earnest.

Work on the satellite is in its final stages and it’s scheduled to blast off on 29 March 2011. Its owners said in February that on-site tests would continue to be conducted ahead of the launch.

The satellite will be launched from Arianespace‘s site in Kourou, French Guiana, via an Ariane 5 rocket.

No less than 90% of the satellite’s investments come from African corporations and lenders. Intelsat, a US-based multinational that’s a leading provider of fixed-satellite services worldwide, is funding the remaining 10%.

Intelsat said the new satellite will operate from a geostationary orbital slot at 32.8° east, making it well positioned to boost broadband, media content and other satellite-based applications in Africa.

The launch comes at a time when broadband usage on the continent is growing. New fibre-optic networks are coming on stream against the backdrop of those that have gone live over the last few years, and this satellite is expected to optimise their capacity and improve communications.

“When launched, the satellite will not only deliver crucial services specifically tailored for Africa, it will also herald the dawn of a new era where Africans enjoy far greater involvement in the space communications industry,” Andile Ngcaba, chairperson of Convergence Partners, said in a statement in February.

Convergence Partners are one of the South African-based funders of Intelsat New Dawn.

The upcoming solar maximum, predicted to affect the functionality of space satellites in 2011, is not expected to disrupt Intelsat New Dawn’s launch. However, scientists have warned that the anticipated burst of solar activity will interfere with some modern technologies on earth.

Orbital Sciences Corporation has finished manufacturing the satellite at its facility in Virginia, US.

Intelsat New Dawn is now making its way to the launching spaceport in Kourou, after being shipped via Washington DC.

The launching rocket, Ariane 5, is reported to have arrived at the spaceport earlier in February and preparations for take-off are at an advanced stage.

Ariane 5, owned by Arianespace, is currently considered to be the most reliable and successful rocket on the market. It pulled off its 38th successful mission in a row in 2010 on its 52nd launch.

Intelsat New Dawn was commissioned five years ago, with the construction process intensifying over the last two-and-a-half years.

It will be completed and launched within the US$250-million (R1.7-billion) budget originally secured for funding.

The investment includes 15% equity and 85% debt. The list of equity funders includes internet service providers such as Vodacom, Seacom, Internet Solutions, FibreCo and Dimension Data, among a range of other groups.

Johannesburg-based broadcast and telecommunications services group Inala Technologies is also on board.

Intelsat New Dawn, which will be managed and operated as part of Intelsat’s international fleet, is the company’s 22nd communications satellite covering Africa.

The Intelsat 17 satellite (IS-17), the most recent to launch into space, provides capacity across Africa as well as Europe, the Middle East and Eurasia. IS-17 rocketed off on 26 November 2010 – also via Kourou.

The range of communications satellites enhancing telecommunications and broadband connectivity in Africa include Rascom-QAF1R, Nilesat 201 and Eutelsat’s W3A. Russia’s first satellite, Molniya 1-S, launched in 1974 and covered Africa as well as Eurasia and Australia.