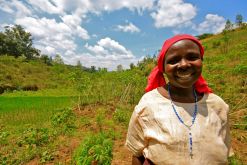 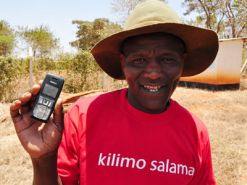 Farmers in Kenya and Rwanda are able to farm without the fear of financial loss through damaged crops caused by bad weather – in farming terms this generally means either too much or too little rain, and it can be the undoing of a farmer. Kilimo Salama is an insurance scheme offering farmers coverage for their farms from the effects of drought and rain; and it works with just the use of a mobile phone.

Kilimo Salama, which means “safe farming”, is an innovative programme operated by Safaricom, Kenya’s largest mobile operator; the Syngenta Foundation, for sustainable agriculture; and UAP Insurance, a leading insurance provider. It started in Kenya in 2009 before expanding to Rwanda.

The scheme was established to give farmers the confidence to invest in their farms, which feed their communities, and was created by the Syngenta Foundation. Syngenta aims to extend crop insurance to smallholder farmers in rural and developing countries through innovation.

Insurance is bought from agro-dealers, who are registered and trained by Kilimo Salama. They are issued with camera phones used to scan the bar code of the policy bought by the farmer, at the time of purchase. This immediately registers the policy with UAP Insurance over the Safaricom network.

Farms from as small as one acre – about 0.4 hectares or 4 050 square metres – can take out Kilimo Salama insurance to shield them from any financial losses, enabling a premium price that millions of farmers can afford. Kilimo Salama is one the new innovations in small scale agriculture that has been quietly sweeping across Africa’s farms, boosting production, crop fields and family incomes.

Since its launch, the project has grown from 200 policy holders to more than 70 000. Its operations are innovative: solar power weather stations collect weather data at the end of each growing season to determine if extreme weather might affect the harvest. Kilimo Salama staff do not visit farms to assess the pay out and farmers do not have to submit a claim. Rather, it uses information from the automated weather stations and makes automated mobile pay outs if the rainfall is 15% below or above the average.

The scheme’s design was based on the Laikipia District in Kenya, where hundreds of maize farmers insured their farms against the long rains of 2009. Since weather monitoring on farms has developed, several other projects have been launched in countries such as Mexico, Morocco, India, Malawi and Tanzania.

But Kilimo Salama is the first agricultural insurance programme worldwide to reach smallholders using mobile technology. Farming is a way of life for many people in Kenya and Rwanda, and Kenya’s economy is highly dependent on agriculture. Kilimo Salama offers some measure of security from risk in these countries.

Micro insurance on the rise

According Microfinance Africa, about one billion people live in Africa, with an estimated 60% living below the poverty line. It is common cause that natural disasters such as floods and drought, as well as disease affect the poorest the hardest. Micro-insurance is insurance with low premiums that protects low income earners and their assets from disaster. It is targeted at individuals who have little savings, mainly for lower valued assets, illness, injury or death.

According to the University of Cambridge Research, there are about 500-million smallholder farmers worldwide, of whom Africans are some of the poorest. For many Africans, farming is the only source of income and money is generated according to what is planted and harvested. Statistics estimate that 60% of the world’s available farmland is in Africa.

It is a large continent with many different types of climate. In North Africa, in Morocco, Algeria, Tunisia and Egypt, farming is limited by the dry climate. Products planted include wheat, barley, olives, grapes, citrus fruit, and some vegetables. According to Plant Life, less than 20% of the working population in Libya and about 55% in Egypt are employed in farming. Farm Chemicals International found there was a high incidence of organic farming in Tunisia, which reserves 300 000 hectares for organic farming of products such as olives, dates, jojoba, almonds, fruit, vegetables, honey, and medicinal plants.

West Africa comprises 16 countries, most of which are composed of low plains, desert and coastline. Agriculture in the region has developed, attracting economic interest in rice farming. The methods of farming in West Africa include permanent and temporary intercropping and livestock. Its forests offer a large amount of biodiversity and support the population with forest resources. Fishing is also a large income earner.

The International Federation of Organic Agriculture Movements (IFAOM) and the Swiss Research Institute of Organic Agriculture found that 38 African countries had received certificates of organic farming, and about a million hectares of land had been given an organic stamp. There are as many as 470 000 farms on the continent, the largest number in Uganda. These farms provide employment and feed many on and outside the continent. Organic farming is carried out in South Africa, Uganda, Kenya and Tanzania.

In addition, 16.4-million hectares of land have been certified as bee keeping areas. The largest of these areas is in Cameroon.