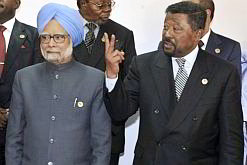 India plans to invest R4.7-billion into the
establishment of new education
institutions and training programmes in
Africa.
(Image: naxaf.com)

India has revealed plans to invest R39-billion (US$5.7-billion) in education and development in Africa as part of the Africa-India framework for enhanced cooperation. The country made the announcement at the second India-Africa Summit held in Addis Ababa, Ethiopia, in May 2011.

According to the declaration: “India is committed to substantially contribute to building African capacities through supporting education and capacity building institutions and in enhancing value addition and processing of raw materials in Africa.”

The country outlined plans to invest R4.7-billion ($700-million) in the establishment of new education institutions and training programmes. This will be done in consultation with the African Union. Another R34-billion ($5-billion) will be invested over three years towards supporting the continent in achieving its development goals.

Speaking at the summit, India’s Prime Minister Manmohan Singh said his country was considering establishing an India-Africa virtual university to help meet some of the demand for higher education in Africa. “Under the proposed university, 10 000 new scholarships would be available for African students,” he said.

The prime minister added that his country would also be setting up other initiatives to enhance higher education and research partnerships with Africa. He said this would increase the number of graduate and postgraduate scholarships to be offered to African students.

“We would like to make education in India an enriching experience for each student who comes from Africa. Our total commitment for the next three years by way of scholarships to African students will stand at more than 22 000.”

Indian universities currently receive the largest number of African students than any other continent outside Asia. Thousands of students are enrolled in the country’s institutions annually.

The Indian government said: “This is part of a larger plan to gain goodwill by selling one of India’s strongest points in Africa – our education – which will in turn help Indian firms that invest in Africa.”

During bilateral and multilateral interactions, African countries have continually been calling for greater participation by India in helping improve education in Africa.

The Indian government’s chief higher education policy planning university, the National University of Educational Planning and Administration (Nuepa), will help set up the institute in Burundi.

Aiepa will be modelled on Nuepa and is set to lead education policy and administration across African countries.

He said the country would be willing to support the establishment of an India-Africa University for Life and Earth Sciences.

“As part of our new initiatives in the social and economic sectors, we will establish rural technology parks, food-testing laboratories, food-processing business incubation centres and centres on geo-informatics applications and rural development.”

Initiatives to improve relationships between scientific institutions in Africa and India would be developed as part of the agreement. Training on health-related issues such as HIV, TB and malaria would also be explored, he added.