Africa could solve many of the problems it faces by forming strategic partnerships within and outside the continent. The 2016 World Economic Forum in Switzerland, held in January, provided a platform for these sorts of partnerships to be discussed further. 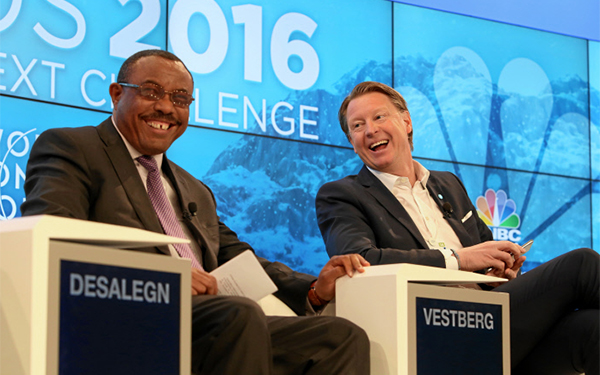 President and chief executive officer of Ericsson, Sweden, Hans Vestberg and Hailemariam Dessalegn, prime minister of Ethiopia, pictured during the session “Africa’s Next Challenge” during the annual meeting of the World Economic Forum in Davos, Switzerland, on 21 January 2016. (Image: WEF, photo by Monika Flueckiger)

• Gallery: a chance for global solutions at WEF
• Who is South Africa sending to Davos?
• President Zuma upbeat as he concludes WEF visit with meeting with global investors
• Brand South Africa at World Economic Forum 2016
• Social assistance & your taxes: how many people do you support?

There are four ways, through revolutionary partnerships, for Africa to secure universal access to basic necessities by 2025. “African heads of state have launched a new deal on energy, focused on power, potential and partnership,” reads the World Economic Forum (WEF) website.

“More than a century after Edison invented the light bulb, half of Africa is still in the dark,” noted Akinwumi Ayodeji Adesina, president of the African Development Bank (AFDB) during the 2016 WEF gathering.

“We talk about the Fourth Industrial Revolution, but it all starts with the need for electricity, which is like blood in the system. If we don’t have it, we can’t live.”

The most important relationships are those with industrial firms and foreign direct investment. According to the WEF, there are about 700 million Africans with mobile phone technology.

“ICT is coming naturally into the whole continent,” said Hans Vestberg, the president and chief executive officer of Ericsson, the Swedish communication technology multi-national corporation. “Broadband and cloud is coming into Africa. Almost all Africans will have smartphones five years from now. Think about what that can do for governance.”

Relationships with countries abroad is another partnership that would aid Africa.

Because of excess labour, industrial capacity, and slowing growth at home, China is one of the countries that is increasingly looking to Africa for growth opportunities. In turn, African countries could also benefit.

“The strategic platform between China and Africa is the best I’ve ever known,” said Hailemariam Dessalegn, Ethiopia’s prime minister. “But emerging economies like China and India are no longer more competitive in labour, and it is the turn of Africa now.”

A third revolutionary partnership involves increasing regional trade and commerce, which, according to the WEF, currently accounts for 11% of overall trade.

“We know that, if we traded more goods among ourselves, we would have a lot of gains,” said Paul Kagame, the president of Rwanda. “We don’t have to wait for these changes, but can easily compensate for what we’re losing overseas by concentrating on what is very close to us and what we can do among ourselves.” 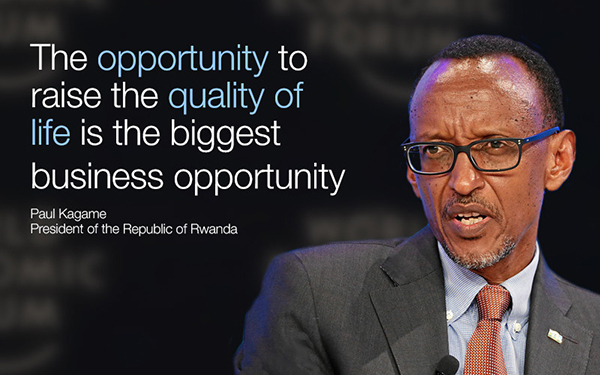 Rwandan President Paul Kagame said there was potential for business in improving the lives of people, speaking at the World Economic Forum in January 2016. (Image: WEF)

Forming partnerships with rural citizens, with a particular focus on women, is the fourth partnership.

Africa holds 65% of the arable land left in the world, states the WEF. “To process raw agricultural products like cocoa within the continent, Africa’s leaders can invest in farms as a business, half of which are run by women. By helping women link their products to markets, some $300-million (about R5-billion) in loans can leverage $3-billion in new potential.”