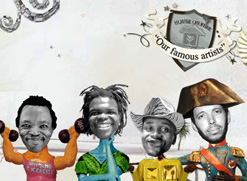 From left, artists Noah Mdluli, Phuzu
Mtshali, Shadruck Masuku and Jiggs
Thorne in a screen grab from the House
on Fire website. 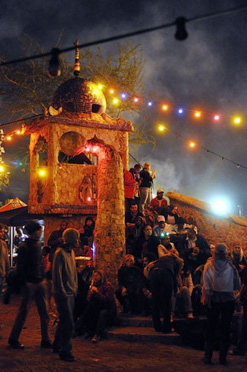 House on Fire was carved out of local
materials in all kinds of shapes, figures
and towers. It is a castle where colourful
mosaics line the walls, impressive
sculptures hang from the ceiling and
sprout from the ground, and detail is
infused in every inch.
(Images: House on Fire)

Four men are changing the global image of Swaziland one artwork at a time, as the group running the whimsical art-filled castle that is House on Fire work to turn their country, one of the smallest in Africa, into the most happening place on the continent.

House on Fire is the brainchild of Jiggs Thorne, a formally trained Swazi artist. Where others saw tourist craft markets Thorne saw undiscovered artists, untapped potential, and partners – in the form of Noah Mdluli, Phuzu Mtshali, and Shadruck Masuku – for his new venture. Concerned about how many talented young people in his country struggled to make a living and had no vehicle to display their work, Thorne took action.

“I started to work with road-side carvers that had a lot of humour and it played to my senses,” he said. “At some point I realised that we needed to come together under the same roof. We needed to build a platform to inspire the arts in Swaziland and that was really the inspiration for designing the space.

“Our history is really from roadside to gallery.”

The gallery in which the group work and collaborate is an art-filled castle of impressive proportions, what resident artists call their “fantasy-scape” and one that has steadily become a national point of reference.

The space was carved out of local materials in all kinds of shapes, figures and towers. It is a castle where colourful mosaics line the walls, impressive sculptures hang from the ceiling and sprout from the ground, and detail is infused in every inch. It is a magical marriage between Gaudi’s architecture, Picasso’s distorted shapes, and Southern African carving; surreal and comfortable, it also includes a stage and garden.

A far cry from traditional development projects, House on Fire is a local artist’s alliance.

“We are a collaborative team in a real relationship because we need each other to succeed,” Thorne said. “We absolutely could not make it without each other.” He said art buyers were sometimes confused by their inability to attribute a single author to their pieces. “But we cannot, because we work in synergy.”

The group’s work expands beyond running their fantasy gallery. Aside from creating sculpture, carving, and installation art, they promote events and music performances, and are involved in community action. House on Fire is open day and night to both locals and visitors.

“A really exiting part of this is the idea of a cultural meeting point,” said Thorne. “We call that the ‘juncture of hum’.”

Part of what the space does, by virtue of its location in rural Swaziland, is challenge stereotypes. “You can be an artist in Swaziland, and artists can share their stories and create a new language that has relevance,” Thorne said.

The Swazi landscape is dominated by sugarcane plantations, plain fields, natural reserves, and small towns. Driving past the capital, Mbabane, it is hard to imagine that a gallery and cultural space of spectacular proportions hides at the next roadside exit.

The national economy is supported by tourism and agriculture, but poverty remains calamitous. Swaziland is one of the poorest countries in the world and faces increased challenges due to the HIV/Aids pandemic. The country has the highest HIV prevalence rate worldwide and the United Nations estimates life expectancy to be 32.5 years of age, the lowest on the planet.

Not discouraged by the statistics and challenges, House on Fire and its artists became involved in artfully fighting poverty. “We already had House on Fire and the idea was to let that fire spread though the walls and into a wider space. We set our sites high,” said Thorne.

“Our work is about accepting that you have a story to tell and a mandate to carry on your own message. House on Fire is a conscious platform; we recognise the need to develop the local arts, but we also act on the concerns that affect us all as Swazis.”

With this in mind, House on Fire created Bushfire, a music festival that brings musicians from all over Africa to Swaziland and raises funds to fight local poverty. The 2010 edition of the Bushfire Festival had more than 19 000 visitors over three days of concerts.

Profits benefit Young Heroes of Swaziland, an independent organisation that supports local Aids orphans. The issue is pressing in a country of 1.5-million, where an estimated 80 000 children have been left parentless due to the pandemic.

For critics who have difficulty imagining art as important in developing Swaziland, Thorne said: “The idea of creation for creation’s sake is not very well understood here. But we have made this conscious decision to start specialising and cultivating a special language and sense of identity through our work.”

The numbers back up Thorne and the House on Fire group. The conservative estimate is that this year’s Bushfire Festival injected R6-million (US$830 000) into Swaziland’s economy.

The next Bushfire Festival is planned for 27 to 29 May 2011. In the meantime, the House on Fire foursome have an upcoming art project: carving whimsical armours and dressing their bodies as a league of Swazi Knights. Nothing could seem more appropriate.