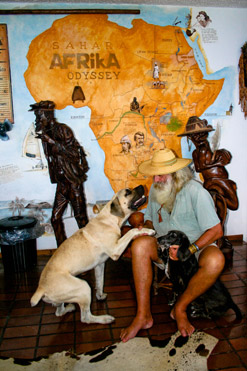 Kingsley Holgate – aka “the grey beard”
– and Watson share a moment in front of
the giant map of Africa in his home. 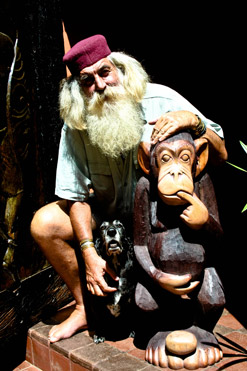 Kingsley with Abu from Abidjan. 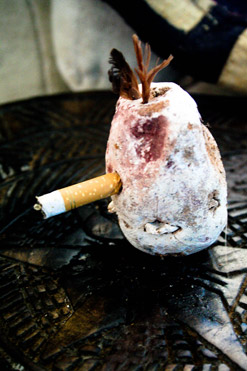 The voodoo relic that keeps Kingsley safe
from theft during his travels through
Africa. All it needs to do its job is a
cigarette and a drop of water once a year. 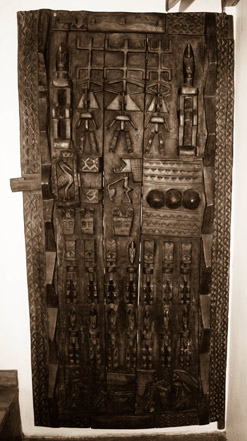 The Dogon granary door Kingsley found
while taking his father-in-law George to
Timbuktu – in a peanut-butter bottle. 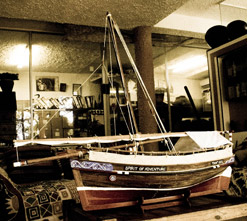 It’s a steaming bright blue February morning on the North Coast of KwaZulu-Natal. The little beachside town of Zinkwazi is pulsing with heat as I stand under a milkwood tree being barked at by a giant dog.

“Aaaibo, thula umsindo Watson!” The woman sweeping leaves in the yard is clearly annoyed by Watson’s incessant barking, and shushes him with a practised swipe of the broom.

I’ve disturbed the peace at Kingsley Holgate’s Afrika House by ringing the bell, and my penance is to be attacked by mosquitoes. I swat at my ankles with a notebook and, with it thoroughly covered in blood and bits of broken insect limbs, am shown through the varnished wooden gate decorated with intricate carvings into the Swahili-style house.

Walking through Kingsley’s home is a sensory overload. I can hear the deep voice of the grey beard, as he is fondly known, chuckling down a telephone line somewhere in the cool depths of the house.

I have three dogs bouncing around my ankles, two parrots speaking rapidly in squawks and hallos, and my eyes are taking in countless carvings, masks, weaponry, plants, pots, stars, beads, cloth and endless bits and bobs neatly arranged from wall to wall. Even the air in here seems to have been sucked in from a secret spiced continent.

Kingsley and his wife Gill – nicknamed Mashozi, or “she who wears shorts” – are a well-known couple, famed for their madcap family adventures through Africa and indeed across the world. With a purposeful humanitarian objective and a distinct distaste for living inside the realms of normality, the Holgates have been just about everywhere.

Kingsley was born in 1946 in Durban, and primed for adventure from an early age, snacking on the tales of David Livingstone read to him by his father. Used to life in the bush from his family’s missionary work, on finishing school he backpacked all over the world in a special effort to grow his beard.

At age 23 he managed to procure the attention of one Gill Adams, who came back to Africa with him. And so their mutual adventure of a lifetime began.

Kingsley and Mashozi have completed many formal expeditions throughout Africa to implement their aid programmes, such as One Net One Life, which involves distributing hundreds of thousands of mosquito nets to mothers and babies across malaria-infected areas.

They also have the Right to Sight programme, which supplies glasses to people who battle with their eyesight, thereby ensuring they can keep working to earn an income. Then they have the Teaching on the Edge programme, which takes mobile libraries and classrooms to some of the most remote spots imaginable.

All these projects are to be carried over into their 2009 Boundless Southern Africa Expedition, kicking off in May.

From circumnavigating the world along the Tropic of Capricorn, to sailing on Land Yachts across the Makgadikgadi salt pans in central Botswana, the Holgates have set foot in some weird and wonderful places, and tend to bring equally weird and wonderful things back to their homestead.

It’s not surprising that a sign outside the main entrance has the following inscription: “Afrika House – A Fusion of the Cultures of the East Coast, Karibu”. Karibu is the Swahili for “welcome”.

The Coast of Trinkets

At the base of the staircase that leads up to the Captain’s Bar and incredible views of the ocean sits a gorgeous wooden ape named Abu. He reposes next to a parrot cage, and listens patiently to everything his feathered friend has to say, with one finger in his mouth and a fez on his head. How did he come to live in Zinkwazi?

In 2007 the Outside Edge expedition left South Africa, and the crew made their way up through the graceful curve of West Africa. Leaving the gold coast behind them, they entered Côte d’Ivoire, the shoreline of which is sometimes referred to as the “The Coast of Trinkets”.

Travelling through Abidjan, Mashozi, an arts and crafts enthusiast, spied a market not to be missed. The crew pulled over to examine the carvings, fabrics, drums and grim-looking swords, but it was the enigmatic Abu that caught Mashozi’s eye.

Kingsley wasn’t thrilled at the thought of dragging an ape that weighs as much as small elephant all the way round Africa, and said as much, firmly planting his rather large foot on the ground. Even when the seller dropped his price, Kingsley stood firm.

But never underestimate the power of a woman with a passion for purchase. Back on the road, Kingsley was told via radio to look under the blanket in the back of the Land Rover, an early birthday gift from his son Ross and daughter-in-law Anna. Abu the Ape from Abidjan with his finger carved into his mouth for eternity had just scored a ride on the trip of a lifetime.

African culture is fascinating, and more so because of the way it varies through every turn in a valley and hop over a river. Belief in ancestry and spirituality is everywhere, and in some countries voodoo sits highly among the most powerful of these beliefs.

The Outside Edge Expedition reached Lomo, the capital city of Togo, which is famed for the gigantic Akodésséwa voodoo market. The smell of incense punctuated by decaying animal flesh is further heightened by piles of dried heads of every conceivable animal, and people come from as far as Gabon, the Democratic Republic of Congo, Ghana and Nigeria to get their hands on the potent traditional medicine.

Kingsley was on a mission for a specific kind of medicine, for protection against theft. In remote areas of Africa, with many days of travel ahead, losing even one piece of vital equipment to sticky fingers is not an option. The voodoo vendor offered him a clay fetish in an empty tortoise shell.

The instructions were to chant his name three times – “Kingsley, Kingsley, Kingsley” – over the chaotic noise of the market. Three drops of water a year through the hole in its head and one annual cigarette placed in its mouth would keep it happy enough to protect it Kingsley’s goods.

The fetish did its part glued to the dashboard of the Land Rover, and now sits comfortably propped between wooden carvings right at the opposite end of the continent it was created on.

Kingsley had told me he had limited time that morning for my interview, but two hours later it was obvious that he was enjoying the show and tell as much as I was.

Not one to talk about himself, Kingsley is the ultimate spokesperson for the talent that created the pieces that fill his home. It would take a month to hear the tale behind each gnarled piece of metal; or each intricate Mkondi figure from the Rovuma River, with hands clasping angel wings so rarely seen in African art.

At the top of the staircase, next to the giant map of Africa, a beautiful Dogon granary door hangs on the wall.

“Ah, yes, that is the door we collected in Mali,” Kingsley says, “when we took George to Timbuktu in a peanut-butter jar.”

Of course, how else would one transport ones father-in-law through Africa?

Mashozi’s father, George, loved the continent and had always wanted to visit Timbuktu, but never made it there during his days on earth. So, in the spirit of one last adventure, George was packed in a screw-top jar – and everyone was instructed to double-check any powder they used in cooking before they tossed it into the mix, lest George become an additional source of protein.

An inland trek of 1000 kilometres from the coast of Mali to Timbuktu led the expedition past the Dogon. These are an ancient people that have carved their homes into the sandstone cliffs of the Bandiagara escarpment, and who are particularly magical, with animism as the focal point of their religion. Leaving the Dogon, George was finally scattered into the Niger River at Timbuktu with the words safari njema, “have a good journey”.

Kingsley’s largest artefact is actually in thousands of pieces, packed into storage. Each piece of the massive and ancient dhow has been digitally photographed and marked, ready for reconstruction, a Grindrod Limited initiative to rebuild her as a piece of Swahili maritime culture. When that will be, not even Kingsley knows.

I’m trying to work out where on earth 35 metric tons of Swahili sailing dhow would fit on the property. Perhaps on the roof, next to the pirate flag?

Amina, the Spirit of Adventure, was the boat that Kingsley and his crew used in the African Rainbow Expedition, sailing with the trade winds all the way to the Somali border. An exact replica sits on a low table outside Kingsley’s Adventure Planning Room (something I have decided everyone should have).

As we stand around the model surrounded by tattered maps, reference books and old leather-bound journals, Kingsley tells me a bit about the Amina and his year on board.

“She was handcrafted on Chole Island, just south off Mafia, a beautiful island of the Tanzanian coast.

“Carrying 10 tons of life-saving mosquito nets, it was a great humanist turnabout – it was dhows such as these that raped Africa, carrying off cargoes of slaves and ivory. And now we were using one to save lives instead.”

The story of barefoot days on the creaking wooden deck and sleeping under the stars at night is cut short when Kingsley bounds out the door with a yell.

“Watson! Come here now!” The monstrous 7-month-old hip-high hound sheepishly returns, and Kingsley tells me the dog has a taste for Mashozi’s geese … having to explain a mass of feathers when she returns would not have been fun.

“Yes, well, it wasn’t easy, that trip,” he continues. “One of our crew, Bruce Leslie, was stabbed in the neck by a pirate, and had to be evacuated. We carried on sailing, but closer to Somalia we had a mutiny as the crew were too scared to continue because of the violent piracy.

“So we hired our own little militia, with automatic weapons, and made it safely to the border.” Kingsley must be one of the few people who can fly a pirate flag on his roof with any authority.

Just before it’s time to leave, we are up in the Captain’s Bar. Kingsley points to a life-size carving of a weather-beaten man, and tells me you can actually smell his bad breath! Amazed, I immediately lean over with my nostrils flared and inhale.

A deep chortle rumbles out behind me. “Just kidding! Life’s a great adventure isn’t it?” I’ve been had by one of the greatest of life’s adventurers, and I don’t mind one bit.

Many thanks to Kingsley and Mashozi for allowing me to visit their home, something not many people are privy to. Ngiya bonga kakhulu.