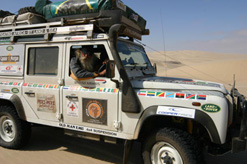 Holgate in one of his two Land Rovers,
which he has named after the porters who
carried David Livingstone’s body for 1 000
kilometres to the sea.
(Image: Landyonline) 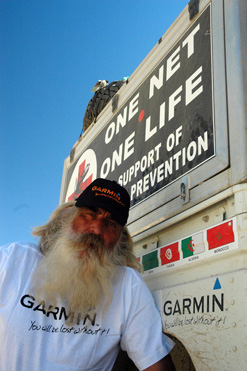 During the Africa Outside Edge expedition,
Holgate and his team will distribute one
million insecticide-impregnated malaria
nets as part of the One Net One Life
campaign.
(Image: Cameo Corporate
Communications) 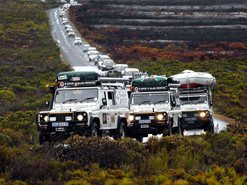 The expedition had an initial convoy of
347 Land Rovers – verified by Guinness
as the longest-ever escort of a
humanitarian convoy.
(Image: Land Rover South Africa) 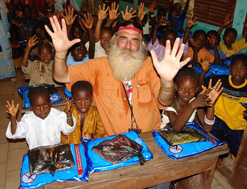 Holgate handing out the nets to children at
a school for the deaf in Conakry, Guinea.
(Image: Cameo Corporate
Communications)

The Zulu people call South African explorer Kingsley Holgate Nondwayisa uya Shinga, or African lily trotter, a bird that wades the continent’s rivers on long, spindly legs. The name suits Holgate: both for his physical appearance, and for the number of rivers he has crossed in expeditions across the globe.

In the tradition of early explorers of Africa such as David Livingstone and Frederick Courtney Selous, Holgate, always accompanied by his wife and son, has travelled the continent from top to bottom, unlocking much of its mystique for the rest of the world.

The family are seasoned adventurers, over the years having journeyed from Cape to Cairo along Africa’s major waterways, circumnavigated the continent’s great Lake Victoria, and trekked around the world along the Tropic of Capricorn.

But it’s not only about the adventure. In all his trips Holgate takes with him weapons in the fight of malaria, a disease that kills a million people a year. During his latest adventure, the Africa Outside Edge expedition, he and his team are distributing a million mosquito nets impregnated with insecticide to vulnerable women and children.

Africa Outside Edge will see Holgate and his entourage travelling around the edge of the continent in Land Rovers and inflatable boats, starting and ending in Cape Town. This circumnavigation has been achieved only once before, by fellow South African Rian Manser – on a bicycle.

The expedition left Cape Town on 27 April 2007, and is currently in Sudan in North Africa. It plans to arrive in Mombasa, Kenya, on Africa Malaria Day, 25 April 2008, where teams of volunteers driving up Africa’s east coast will meet the adventurers.

One net, one life

Personal experience has made malaria Holgate’s mission: he and his family have battled the disease more than 60 times, and he knows how difficult it is for people in remote areas to get treatment.

“In the mangrove swamps of the Rufiji delta, where malaria is their single biggest problem, fisherman paddle for days by dugout to get to the nearest clinic,” he says in his book Africa – In the Footsteps of the Great Explorers.

“With the help of the World Health Organisation we use our expedition Land Rovers as mobile clinics to distribute educational material, anti-malarial products and insecticide-impregnated nets.” In his One Net One Life campaign, Holgate hands over the nets personally to ensure they reach the people for whom they are intended.

In Africa, malaria is the most common cause of death of children under the age of five. A child dies of the disease every 30 seconds and those who survive are often left with brain damage. Expectant mothers are also vulnerable because of the increased volume of blood produced during pregnancy.

Africa Outside Edge also has other social responsibility components: Right to Sight, which gives people access to eye doctors and reading glasses, and Teaching on the Edge, which provides educational and literacy material to schools.

That’s a lot of baggage, but luckily the expedition had an initial convoy of 347 Land Rovers – verified by Guinness as the longest-ever escort of a humanitarian convoy. Holgate is also carrying a Scroll of Peace and Goodwill through 33 African countries, collecting signatures as he goes. South Africa’s former president Nelson Mandela and Archbishop Emeritus Desmond Tutu, both Nobel peace laureates, have signed the scroll.

Added to the baggage is a calabash containing seawater from the Cape of Good Hope. On their first major expedition in 1993, the family carried a calabash covered with Zulu beadwork and filled with Cape Point seawater which was emptied into the Mediterranean where the Nile joins the sea. The calabash has since become a talisman of all the expeditions and is filled at the beginning and emptied at the end of each journey.

Holgate attributes his love of exploration to his missionary father, who regaled his three sons with stories of Scottish adventurer David Livingstone’s journeys. During school holidays the elder Holgate would pile the family into the car and journey up to Zambia and the Belgian Congo, today’s Democratic Republic of the Congo.

Holgate’s first expedition, in 1993, took him and his family from Cape to Cairo along Africa’s major waterways, using inflatable boats and four-wheel drive vehicles as back-ups. Holgate always travels with his son Ross, who takes care of the vehicles and logistics, and wife Jill, also known as Mashozi (“she who wears shorts”), who does, she says, basically anything.

That epic trip, registered with the Royal Geographical Society as a world first, is documented in his first book, Cape to Cairo. Holgate is a fellow of the society and has also worked closely with National Geographic to capture his adventures on film. His exploits have since become familiar viewing on that channel.

The adventures are almost too numerous to count. Holgate has circumnavigated Lake Victoria, Africa’s largest lake, followed in the footsteps of David Livingstone from his birthplace in Blantyre to retracing the last few days of his life in Zambia, and visited the grave of Frederick Selous, one of his heroes. This, says the adventurer, was an emotional moment. In honour of Selous a little of the Cape Point water in the calabash was poured over the headstone.

Holgate’s major sponsors are Land Rover SA and Captain Morgan Jamaica rum – which he says are both practical necessities for survival on his trips. These include the African Rainbow expedition of 2006; the Rufiji expedition of 2004, which followed the explorations of Selous; the Great Explorers expedition following David Livingstone; and the 2001 Capricorn adventure that saw the adventurer and his family circumnavigating the world along the Tropic of Capricorn.

The Tropic of Capricorn is the major line of latitude in the southern hemisphere. At the height of South African summer, it is the most southerly point where the sun can appear directly overhead at noon.

“Initially it was just going to be Africa,” Holgate says of the expedition, “but the old atlas plays tricks on you. Before long Africa became South America, South America became Australia, and Australia became Madagascar.”

He travels in two Land Rovers – named Chuma and Susi after the two porters who in 1873 risked their lives to carry David Livingstone’s salt-preserved body over 1 000 miles, from deep in Zambia to the port of Bagamoyo, Tanzania. Here the British were able to retrieve it for burial in the UK.

Holgate has published three books with Struik publishers: Africa – In the Footsteps of the Great Explorers; Capricorn: Following the Invisible Line; and Cape to Cairo.

Africa Outside Edge is scheduled to end at the Cape of Good Hope on 28 and 29 June 2008. Its many sponsors include not only Land Rover SA and Captain Morgan, but also Rotary, Nando’s , British Airways, Nedbank, Gemini inflatables, Yamaha outboard engines, Garmin GPS devices, Motorola, and Danish company Vestergaard-Frandsen which produces the PermaNet insecticide-impregnated textile that the malaria nets are made from.

Malaria is preventable and treatable

Malaria is a blood-borne disease that is caused by a parasite transmitted by certain mosquito species from person to person. Symptoms appear about nine to 14 days after the bite and include fever, headache, vomiting and other flu-like symptoms. The infection can be treated but if left untreated can result in coma, severe life-threatening anaemia, and death. There are about 350- to 500-million infections and more than one million deaths worldwide every year.

Malaria is preventable but experts agree that a comprehensive approach is required. This includes providing effective antenatal care for women, insecticide-treated bed nets, using insecticide spray on the inside walls of houses and in mosquito breeding areas, making it easier to get an accurate diagnosis and treatment thereafter. They key to the success of this strategy is education.

But it is not only individuals that are severely affected. Malaria causes children to miss school, is a deterrent to foreign investment, and tourism is negatively affected. Annual economic loss in Africa is estimated at $12-billion.

According to the World Health Organisation up to 124-million people in Africa live in areas at risk of seasonal epidemic malaria, and many more in areas outside Africa where transmission is less intense. The organisation also says that up to 30% of malaria deaths in Africa occur in the wake of war, local violence or other emergencies. Malaria deaths often far exceed those caused by the original conflict or problem.