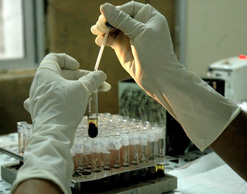 The modernisation of HIV laboratories in
Tanzania will allow more people to learn
their status and begin treatment if needed.

More than 2-million people in Tanzania are infected with HIV/Aids. Like many countries in Africa, diagnosis and treatment of the disease is hampered by poor infrastructure and access to medication, but a project by the Abbott Fund to modernise the country’s laboratories is helping to lessen this burden

Since 2001, Abbott Fund, the philanthropic arm of pharmaceutical and research giant Abbot, has invested nearly $40-million (R310-million) in Tanzania’s health care system. Their presence in the country has helped thousands of people with HIV/Aids access better medical care and the implementation of the Regional Laboratory Modernisation Project will allow even more people to be diagnosed and begin treatment earlier. The $10 million (R77.5-million) project, which began in July 2008, will see 23 laboratories that support 77 hospitals around Tanzania upgraded by 2010.

In 2007, the Abbott Fund completed modernising the laboratories at Muhimbili National Hospital in Dar es Salaam, and the Mount. Meru Regional Hospital. Many improvements have since been seen at the completed laboratories: their testing capacity has increased from 45 to 150 patients a day, and there has been a nine-fold increase in the annual number of tests processed. It is the on the success of these labs that the project is modelled.

The first renovation under this project has already begun at the Amana Hospital and four other laboratories will be completed by the end of this year. According to the Abbott Fund, this hospital sees more than 1 500 patients every day and the laboratory processes an average of 500 specimens daily. Space in the existing laboratory is also limited and staff are forced to work many hours of overtime to process the average daily workload.

According to the Abbott Fund website, the organisation has significantly improved the government’s national HIV treatment programme by expanding the HIV testing and treatment capabilities at more than 90 health centres and rural clinics in the country. They have also brought HIV care to people in some remote villages for the first time.

A 2002 public health assessment conducted by the Ministry of Health and the US Centres for Disease Control found that the limited capacity of laboratories in Tanzania was the weakest link in the provision of quality HIV/Aids services. It also found that Tanzania has just one doctor for every 24 000 people and the average life expectancy is 48 years, about 30 years less than that of many European countries.

“We have ambitious treatment goals for the more than 2-million people living with HIV in Tanzania, as well as broader challenges in meeting the needs of people who require long-term monitoring and care for diseases like diabetes,” said David Mwaykusa, Tanzania’s Minister of Health and Social Welfare. “Modern hospital laboratories are the building blocks for successful treatment, and we are grateful and excited to work with Abbott Fund on this project.”

With this project, more staff will be trained in lab management, instrument use and maintenance at the laboratories that are earmarked for improvement. Like Mount Meru Regional Hospital, these improved skills will triple the laboratory’s capacity which will allow patients and physicians same-day access to lab results. The design and staffing of all labs have also been standardised to ensure equal quality of testing at all laboratories.

“This laboratory improvement project is an important part of our continued partnership with the government of Tanzania to make sustainable improvements to the health care system in Tanzania,” said Catherine Babington, president of the Abbott Fund, in a press statement. “We’re improving the delivery of quality care for Tanzanians by upgrading testing services that are critical for the prevention and treatment of diabetes, heart disease, HIV/AIDS and many other conditions.”

As Tanzania’s HIV/Aids population continues to grow each year the government is implementing many successful campaigns to encourage testing. In July 2007 a countrywide voluntary HIV testing campaign was launched and aimed to reach about 4.17-million people in a year. By the end of April 2008, the campaign had exceeded its target by reaching 4.2-million people.

Since 2001, the Tanzanian government, in partnership with Abbott, has distributed more than 1.5-million rapid HIV tests at no profit to organisations providing quality voluntary HIV counseling and testing allowing many people in remote settings to learn their status regardless of access to laboratory equipment or electricity.