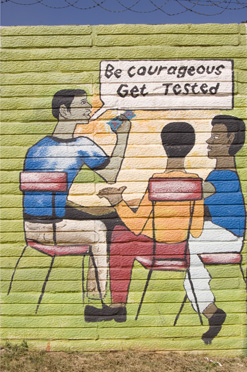 Universal HIV testing and immediate treatment of those who test positive with antiretroviral (ARV) drugs could reduce new infections in countries with a high prevalence of HIV/Aids by as much as 95% within 10 years, according to a new study by scientists from the UN World Health Organisation (WHO).

The findings of a mathematical modelling exercise, published in the 26 November edition of British medical journal The Lancet, suggest that immediate treatment – regardless of clinical or immunological evaluations such as CD4 count, which measures the strength of the immune system – could significantly reduce new infections in many sub-Saharan African countries.

“We took available data from southern Africa, where the epidemic is generalised and transmitted mainly through heterosexual sex, and plugged it into a computer model,” said Reuben Granich, a medical officer with WHO’s department of HIV/Aids and lead author of the study.

Granich said the model worked on the assumption that once patients started taking ARVs, their viral load – the amount of HIV in the blood – was significantly reduced and they became much less likely to transmit the virus.

“The purpose of this study was to stimulate discussion and help define research questions on how to use ARVs, not only for treatment, but also for HIV prevention,” said Kevin de Cock, director of WHO’s department of HIV/Aids and co-author of the study.

“The study does not in any way indicate a change in WHO policy or guidelines for testing and treatment,” he added. WHO policy on treatment stipulates voluntary testing and clinical evaluation to determine eligibility for ARV treatment.

Noting that more research into universal testing and treatment would be necessary before any policy changes could be made, De Cock said WHO would convene a meeting in 2009 to discuss the findings of the mathematical model and see how best to overcome possible hurdles.

“There are human rights issues involved with advocating for universal testing that need to be addressed. WHO continues to endorse testing policies that prioritise informed consent, confidentiality and dignity,” he said.

“Other possible obstacles include the policy’s feasibility, and the possible weakening of other forms of HIV prevention.”

Any interventions to scale up testing and treatment would need to be accompanied by expanded HIV prevention, such as male circumcision, correct and consistent condom use and partner reduction, among others.

The study found that the policy would initially be costly to implement, especially in poorer countries. “Unless we manage to interrupt HIV transmission, we will endlessly be dealing with HIV treatment,” De Cock said.

“Although the policy would be expensive to begin with, in the long run it would be cost saving.”

Various versions of universal access to testing and treatment are already being practised successfully.

“In the industrialised world, for example, all pregnant women have access to universal HIV testing and, if they need it, treatment,” he said. “As a result, in this part of the world, paediatric HIV has virtually been eliminated.”

De Cock said WHO’s newest guidelines on infant treatment also recommended that children under one year of age receive ARVs as soon as they tested positive for HIV, regardless of clinical or immunological evaluations.

According to WHO, nearly 80% of HIV-positive adults in sub-Saharan Africa are unaware of their status, and more than 90% do not know whether their partners are infected. Worldwide, about 3-million people were on ARVs at the end of 2007, but an estimated 6.7-million remained untreated.