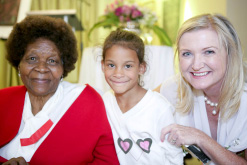 Africa’s young hearts celebrated life with freedom fighter Albertina Sisulu, at both her 91st birthday party and the opening of the Sheika Al Jalila House in Johannesburg.

Mama Sisulu, as she is affectionately known in South Africa, celebrated her birthday on 21 October with family and young heart patients from poor areas of Africa. These youngsters have received life saving heart operations at the Walter Sisulu Paediatric Cardiac Centre for Africa (WSPCCA) in Sunninghill, north of Johannesburg, where the celebrations were held.

The centre’s highly qualified and experienced paediatric cardiac team carries out corrective surgical and interventional procedures on babies and children – giving hope to thousands of neonates, infants and children who would otherwise not survive.

Princess Haya Al Hussein of Jordan, a global patron of the centre, was also there to celebrate with the Sisulu family and to officiate at the opening of the Sheikha Al Jalila House, named after her daughter.

Princess Haya and Lungi Sisulu, son of the veteran couple, officially opened the house, which stands across the road from the Netcare Sunninghill Hospital. This facility, the princess’s gift to Mama Sisulu, will accommodate parents of children receiving heart operations at the centre.

These families sometimes travel across vast regions of the African continent to seek life-saving medical treatment. In the past, parents stayed in rented accommodation paid for by the WSPCCA.

Princess Haya saw the need for a home away from home and donated money to the project, and now parents can stay at the hospital with their children for as long as they like and then simply walk across the road to rest.

Although Mandela was not able to attend Sisulu’s birthday party, he sent her a personal note in which he praised her achievements. The note was read out by the centre’s president Lungi Sisulu during the celebrations.

“Be assured that your role in our country’s struggle for freedom and your impact on so many lives will never be forgotten,” wrote Mandela. “There are very few people in the world as old as we are now – reaching your 91st is a singular achievement and we celebrate with you.”

At the funeral of anti-apartheid activist Walter Sisulu in May 2003, Mandela gave a heartfelt speech in which he described Sisulu as a great South African and champion of the youth. Mandela added that such a man needed a true living memory – not a statue, which is a piece of cement, but an ongoing legacy.

Dr Kinsley felt that there could be no better way to commemorate Walter Sisulu than by treating the sick children of Africa and sending them back to their countries to fulfil their potential as leaders of tomorrow.

He approached the Sisulu family and met with daughter Lindiwe, who toured the facility at a time when 10 babies, each from a different African country, were admitted.

The family agreed that it would be very appropriate for the facility to carry Walter Sisulu’s name, and Mama Sisulu expressed the desire that Nelson Mandela open the centre as a tribute to his late friend. On 7 November 2003 the Nobel peace laureate did just that, and has since become the centre’s patron.

As a retired nurse Mama Sisulu is extremely supportive and visits the centre regularly. At her request, many of the little patients return for a check-up 6-9 months after their discharge.

According to the WSPCCA, South Africa sees about 5 000 babies born each year with serious holes in their heart walls, defective heart valves or other congenital heart defects.

About 95% of these defects can be corrected through surgery. But because of financial constraints and a lack of resources, only about 20% of these children get the surgery they need. The remaining 80% die.

In the US, 1 222 patients per million of the population have open-heart surgery. In Africa only 19 people in each million have the benefit of such procedures, with the majority of these operations being performed in South Africa.

When measured as cost per added year of life, paediatric cardiac surgery is amongst the most cost-effective forms of medical treatment. Fewer than 30% of South African children and less than 1% of children throughout Africa are able to undergo these life-saving operations. The rest die, despite the fact that 95% of heart defects in babies and young children can be successfully treated.

The WSPCCA came into being to address this inequality and to give hope to the cardiac children in both South Africa and Africa at large.