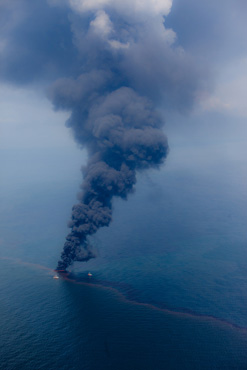 In an effort to clean up oil from the
massive Deepwater Horizon spill in the
Gulf of Mexico, BP sets fire to the surface,
burning up everything in the area. There
have been reports that this has included
oiled sea turtles.
(Image: Kris Krüg, Flickr)

Tragic as it is, the oil spill in the Gulf of Mexico is good news for Africa – increasingly the new frontier for oil and gas exploration worldwide.

Now estimated to be spewing up to 60 000 barrels of oil into the Gulf every day, the Deepwater Horizon spill is huge, but still relatively moderate compared to the leakage that has contaminated places like the Niger Delta and Ecuador’s Amazon.

By early July the Deepwater Horizon oil rig explosion in the Gulf of Mexico cumulative oil spill reached a bit more than six times that of the 1989 Exxon Valdez (around 27 000 barrels). It is dwarfed, however, by the estimated equivalent of more than 50 Exxon Valdez spills into the Niger Delta by Shell, Chevron, and other companies over five decades – the equivalent of an Exxon Valdez spill every year for half a century.

Time will tell what the impact of the Deepwater Horizon spill will have on BP, but it is not looking good. The third-largest oil company in the world, BP is set to pay a massive price for the apparent trade off between cost efficiency and safety as the collective fury of the US has turned on the company, with its share price plummeting and its reputation torn to shreds.

Different to much of what is happening in the on-shore exploration by Shell in much of the Niger Delta, deep-water drilling is extraordinarily complex, risky and expensive. It is also set to expand as findings on land and in shallow waters run dry.

BP, the most swashbuckling and entrepreneurial, has been at the forefront of deepwater drilling and oil extraction for a long time as it sought to extract oil deeper and in different rock formations to that of most others.

In Nigeria the majority of oil leaks were from old pipes that corroded and were not maintained. More recently this has been due to the determined efforts by local communities, gangsters and criminals to tap oil or, by creating a spill, gaining some reward during the subsequent cleanup operation. In anticipation of the damage that could befall its stock market price and what remained of its reputation, Shell eventually decided to reduce its on-shore exposure in Nigeria earlier this year, although it did so also in anticipation of impending legislation in front of the federal legislature in Abuja.

The demand for oil is rapidly using up the remaining global reserves as world addition to carbon fuels comes to a necessary end. It took the world 140 years to use its first trillion barrels of oil. It will use its second, and final, trillion, in less than 30 years. And the need will just go up and up as global energy demand skyrockets.

Currently some 1.5-billion out of 7-billion people still live without electricity and with the increase in global wealth (particularly in China and India) set to continue, the demand for energy is almost endless. As many have indicated, the world has moved from an industrial to a knowledge era, and now into an energy era where the demand and availability of energy will determine global growth patterns.

Some African countries are planning ahead. Morocco, the only North African country without oil, is investing several billion dollars in wind energy and will soon provide almost half its need from wind, with the remainder planned for nuclear. While substantial reserves of coal and gas remain, the dependence on a dwindling supply of oil makes competition for this scarce resource particularly voracious and countries need to act now.

Although Africa is estimated to only have around 10% of the world’s proven oil reserves (Libya and Nigeria have the largest reserves) it will, by 2025, provide around 25% of North America’s oil and is also increasingly important for other countries. Already Angola is the single largest oil provider to China.

Today new sources of oil are being located more frequently in Africa than anywhere else. Hardly a week goes by without a new discovery, often in pristine environmental areas such as Lake Victoria or within the Great Rift Valley. The Niger Delta falls into a similar category. Its mangrove swamps are considered to be one of the ten most important wetlands and marine ecosystems in the world, now also some of the most heavily polluted.

As oil runs out elsewhere and stability continues to improve in Africa, exploration on the continent is lucrative business, with companies tripping over one another to obtain exploration rights.

The reasons are not hard to fathom. Much of the oil in Africa is off the coast of countries such as Angola and others to the north in the Gulf of Guinea. Transport costs are reduced and no pipelines are required. Ships can load up and sail off, unhindered by instability or indeed the need to invest onshore. Sub-Saharan African oil is also viscous and has a very low sulfur content that requires less refining.

Finally, Africa also offers a very favourable contractual environment. Without the capacity to effectively manage and oversee oil exploration and production, nor the ability to amass either the technical expertise or the billions in capital investment required to drill for oil themselves, most countries in sub-Saharan Africa operate on the basis of so-called production-sharing agreements that offer foreign oil companies tremendous down-stream profits. This is particularly advantageous as only four African countries, Algeria, Angola, Libya and Nigeria are members of the Organisation of Petroleum Exporting Countries (OPEC), and therefore not subject to limits on output.

Most important of all, virtually all the big discoveries of oil in recent years have been offshore, in deepwater reserves miles way from civil war, insurrection or strife. In fact, one-third of the world’s new oil discoveries since the year 2000 were in Africa.

Writing in his 2007 book Untapped: the Scramble of Africa’s Oil (Orlando, Harcourt) John Ghazvinian notes that “African oil is cheaper, safer, and more accessible than its competitors”, and there seems to be more of it every day. And, though Africa may not be able to compete with the Persian Gulf at the level of proven reserves, it has just enough up its sleeve to make it a potential “swing” region – an oil province that can kick in just enough production to keep markets calm when supplies elsewhere in the world are unpredictable.’

That the BP deepwater disaster happened within the waters of the global superpower allowed the collective venting of US spleen on an ostensible non-American company. American politicians, President Barack Obama included, could gang up on hapless CEO Tony Hayward as part of a useful domestic political scapegoating exercise, comfortably ignoring their own regulatory failures.

The sad reality is that if the Deepwater Horizon happened say to Chevron off the coast of Angola, there would be no $20 bn compensation fund, little impact upon Chevron’s share price, no delay in paying out handsome dividends and certainly no legislative pressure from a hapless Angolan congress.

All this has now changed. Exxon Mobil BP, Shell, Total or Chevron (the big five) will not be able to easily hide or obscure a massive spill when next it happens and the chances are best that a new spill will not be within US territorial waters, but perhaps in places such as the Mediterranean where BP will shortly start deepwater drilling in 1 700 metres of water.

The well, in the Gulf of Sirte, is the first to be drilled under a $900-million deal BP signed with Libya in 2007, which it described at the time as its largest single exploration commitment. It is also in water substantially deeper than that below the Deepwater Horizon and since it is evident that oil safety technology has not kept pace with exploration technology at these depths, the risks self-evident. One can only hope that the development of improved safety awareness and hopefully, containment and emergency measures, will be spurred by events in the US.

Certainly the Deepwater spill will help to focus attention on the need to act environmentally responsibly and to not push exploration boundaries beyond controllable safety limits. The damage that the oil spill will inflict on the sensitive habitat along the coast of Florida will raise consciousness in the largest global oil consumer about the need for responsible exploration as much along the US coast as in emerging African oil producers.

For their part African governments need to enter into an alliance with the global green movement to monitor exploration practices, as well as with countries such as Norway that has both managed its oil income and its environment in an exemplary manner. This requires a new partnership for the energy age well beyond current practices.