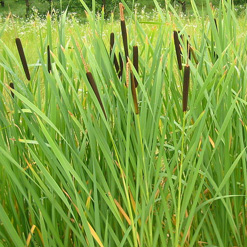 The green charcoal will be made from
agricultural waste such as the invasive
typha weed.
(Image: Wikipedia) 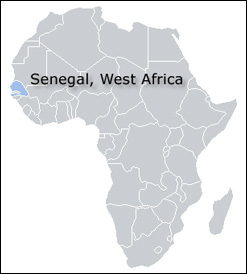 An environmental NGO in northern Senegal is about to go to market with “green charcoal” – a household fuel produced from agricultural waste materials to replace wood and charcoal in cooking stoves.

With Senegal’s trees disappearing, finding viable alternatives is a must. At least half the country’s 13-million people rely on wood and charcoal for household fuel, and 40% use petrol products like butane gas, according to the Ministry of Energy.

“You need to cut down 5kg of wood to produce only 1kg of charcoal,” said Ibrahima Niang, an alternative household energies specialist at the energy ministry.

“Less than 30 years ago, charcoal consumed in Dakar came from 70km away, from the Thiès region. Now you have to go 400km from Dakar to find forests.” Dakar is the capital of Senegal.

According to the country’s Department of Water and Forestry, 40 000 hectares of forest are cut every year for fuel and other commercial uses.

Deforestation is said to exacerbate soil erosion – already a considerable problem in parts of Senegal. The country is part of the Sahel, a region where erratic rainfall, land degradation and desertification are constant setbacks for a population largely dependent on agriculture and livestock.

The “green charcoal” is produced by compressing agricultural waste, such as the invasive typha weed, into briquettes and then mechanically carbonising. The product has the look and feel of traditional charcoal and burns similarly.

“The technology is efficient, effective and economical because we can produce a substitute for charcoal at half the price,” Guy Reinaud, director of Pro Natura International, the French NGO that has partnered with the Senegalese government on the green charcoal initiative. The project is based in Ross-Bethio, a town 300km north of Dakar in the Saint-Louis region.

Environmental firms and governments have long been working to transform plants and natural waste materials into energy, such as water lilies in the Philippines.

Despite the apparent advantages, marketing the green charcoal in Senegal is a challenge, according to Mireille Ehemba, specialist in alternative household fuels at the Programme for the Promotion of Rural Electrification and the Sustainable Supply of Domestic Fuels (Peracod), a joint Senegalese and German renewable energy initiative and another partner in the green charcoal project.

“We have not been able to penetrate the charcoal market in urban areas. People are very attached to charcoal,” said Ehemba. “Much more [education] is needed, including cooking demonstrations that explain how this new fuel works, if we want people to make the switch.”

Not only buyers need to be convinced. Identifying distribution networks and responding to the needs of charcoal vendors are also major challenges, Ehemba said. For 1kg of green charcoal, a vendor makes a profit of 5 US cents (about 9 South African cents), whereas conventional charcoal brings in almost 20 cents (R1.80) per kilogram.

On the other hand, Senegalese consumers may be tempted to switch to the new product because it is the cheapest fuel. One kilogram of green charcoal sells for just 20 cents (R1.80), whereas traditional charcoal currently costs three times that. A 6-kg bottle of butane gas costs about $5 (R45.50).

Fatou Camara from Ross-Bethio has tested the new fuel when cooking for her family of 10. “I can use 1kg of green charcoal and that will cook the dinner. It is cheaper than normal charcoal.”

Camara said she used to use butane gas for cooking, but recurrent gas shortages pushed her to switch to green charcoal.

In the past, butane gas was heavily subsidised and promoted by the government as an alternative to charcoal. But such measures are no longer sustainable, according to the energy ministry’s Niang. The government plans to phase out butane subsidies in July.

Peracod’s Ehemba is concerned the move will put more pressure on Senegal’s forests as poorer households return to traditional fuels like charcoal.

“It is now very important that we propose alternatives like improved stoves and bio-charcoal so that people have affordable ways to cook cleanly,” she said.

ProNatura and the Senegalese government plan to turn the project into a profit-making venture called Green Charcoal Senegal that will produce up to 800 tons of the green fuel a year for sale in the Saint-Louis region.

“It has global potential in terms of its adaptability to different local environments, and it uses local waste materials,” said Reinaud.

Added the energy ministry’s Niang: “It is not possible to completely replace charcoal. But even if we can replace 10% or 15% that is good. It will preserve the forests.”