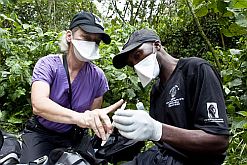 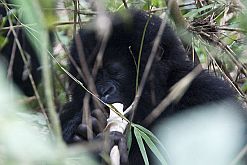 An infant gorilla with a runny nose, one
of the signs of a respiratory disease.
(Images: Gorilla Doctors)

A virus causing respiratory disease in humans has been linked to the deaths of two mountain gorillas in Rwanda, researchers from Africa and the US have discovered.

The findings were revealed in the journal Emerging Infectious Diseases, a publication of the US Centres for Disease Control and Prevention.

The death of the endangered apes two years ago has been the subject of an intense study by researchers from the non-profit Mountain Gorilla Veterinary Project, the Davis Wildlife Health Centre at the University of California, the Centre for Infection and Immunity at Columbia University and the Rwanda Development Board.

The gorillas that died came from the Hirwa group living in Rwanda. There was an outbreak of respiratory disease there between 2008 and 2009, and an adult female and baby ape succumbed from the attack.

With about 786 mountain gorillas (Gorilla beringei beringei) in existence today, finding the root cause of the infection is critical to the conservation of the species.

Because this type of gorilla is so scarce, tourists from around the world pay good money to see them in the national parks of Rwanda, Uganda and the Democratic Republic of Congo.

This brings in much-needed cash to boost conservation efforts, but it also increases the gorillas’ exposure to a wide range of humans and their germs, upping the apes’ chances of contracting a foreign disease. Gorillas share 98% of the same DNA as humans, which makes it even easier for them to contract human-borne viruses.

Analysis of tissue samples taken from the dead gorillas showed traces of the human metapneumovirus.

Mike Cranfield, executive director of the Mountain Gorilla Veterinary Project, said: “Because there are fewer than 800 living mountain gorillas, each individual is critically important to the survival of their species.”

Linda Lowenstine, a veterinary pathologist with the University of California’s Davis Mountain Gorilla One Health Programme, who has studied gorilla diseases for more than 25 years, said: “The type of infection we see most frequently is respiratory, which can range from mild colds to severe pneumonia.”

Poaching, habitat loss, diseases and military conflict have all contributed to the demise of mountain gorilla populations.

In response to this, a number of sanctuaries have been set up in recent years in various African countries. These include the Bwindi Impenetrable National Park of south-west Uganda; Mgahinga Gorilla National Park, also in Uganda; Volcanoes National Park in Rwanda; Virunga National Park in Congo; and the Gorilla Rehabilitation and Conservation Education centre in the Democratic Republic of Congo, which was founded by the Dian Fossey Gorilla Fund.

The Dian Fossey centre is home to 30 young gorillas which are free to roam an area of natural habitat spanning 350 acres.

The mountain gorilla eats mostly fruit and can be found at lower levels of the forest than its subspecies, the Grauer’s gorilla.

The Mountain Gorilla Veterinary Project is a US-based non-profit organisation dedicated to saving the mountain gorilla species. The project and the Davis Wildlife Health Centre are partners in the Mountain Gorilla One Health Programme.

The programme’s mission is to uncover emerging diseases that can be transmitted between people and animals.