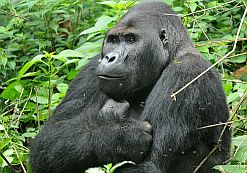 The silverback gorilla is the sexually
mature leader of the gorilla pack.
(Image: The Dean of Travel) 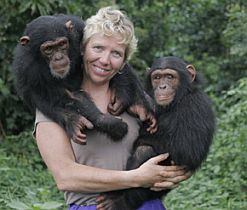 Debby Cox (pictured here with chimpanzees),
of the Pan African Sanctuary Alliance, says
the gorillas at the centre will help give the
local people a glimpse of the world of gorillas,
which has much in common with that
of humans.
(Image: Australian National University)

The Democratic Republic of Congo (DRC) has a new rehabilitation centre, not for humans but for the Eastern Lowland gorilla or Grauer’s gorilla.

The Dian Fossey Gorilla Fund opened the centre, called Gorilla Rehabilitation and Conservation Education (Grace), in a remote area in the DRC in early December 2010.

The gorillas at the centre have been rescued from traumatic situations and are physically and emotionally fragile. Often they fall victim to poachers, who take them out of their habitat to sell them as bushmeat, or traffick them illegally.

The centre’s goal is to rehabilitate these gorillas to survive in the wild, while its ultimate goal is to release them into a forest in the nearby Congo Basin, as a self-sufficient group.

Grace’s manager Sandy Jones said: “All of the gorilla species are endangered and because Congo is so unexplored they have not done a real census on how many Grauer’s gorillas exist.

“But at the rate at which we know they are being killed and the forest is being destroyed we are really concerned that if things aren’t changed now they can be wiped out very soon,” added Jones.

The centre is the first of its kind in east-central Africa and has space for 30 young gorillas, who explore a natural habitat of 350 acres. The US Fish and Wildlife Service funded its construction, while the site was donated by the Tayna Centre for Conservation Biology and is located next to the Tayna Nature Reserve. Both Tayna facilities are owned and managed by local communities, under guidance from the Fossey Fund.

Debby Cox, of the Pan African Sanctuary Alliance, said that getting the chance to observe gorillas living like humans do, in family groups and with some familiar social habits, will help to foster empathy in people.

The Mountain Gorilla Veterinary Project has helped the fund take care of the rescued gorillas in temporary shelters in Kinigi, Rwanda, and Goma, DRC.

Eddie Kambale, a doctor for the project, said: “The gorillas are enjoying this place compared to where they were.”

They didn’t like the noise and dust from the Goma roads, he added, and are happier to be in a more natural habitat.

The first group needing help are four Grauer’s who were airlifted to the centre in a helicopter donated by the DRCs UN peacekeeping force. Gorillas still living at the temporary shelters will be airlifted to Grace in early 2011.

This method of transport was used to avoid inflicting more trauma on the primates, and because roads in the area were in a poor condition.

The four already at Grace are Mapendo, Amani, Kighoma and Ndjingala, who are aged between one and five years old. All were snatched from their families by poachers.

Mapendo, a female whose name means love in Kiswahili, was rescued in December 2007 along with a male, which sadly survived for just two more days.

Amani, which means peace, was rescued in 2009 with a large gunshot wound in her leg.

“It seemed obvious that her mother was shot and she was caught in the crossfire. Although it took many weeks to heal, now she is walking perfectly normal,” said Jones.

Kighoma, whose name means drums, is the only male in the group of four, while one-year-old Ndjingala was rescued earlier this year and is named after the place from which she was rescued.

Males can weigh up to 227kg and stand 1.7m tall. Grauer’s gorillas live in roving groups of up to 30 members, led by a dominant silverback male – silverbacks are the sexually experienced males of the pack and have glossy silver fur on their backs.

They are listed as endangered on the Red List of the International Union for the Conservation of Nature – in 1995 there were as many as 17 000 individuals but now only about 8 000 exist.

In eastern DRC, agricultural activities are leading to massive deforestation, which only adds to the challenge of trying to conserve the Grauer’s gorilla.