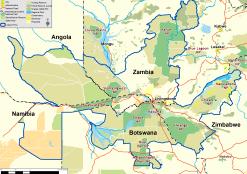 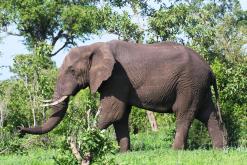 Great herds of African elephants will once
more be able to wander along their ancient
migration routes.
(Image: Luke Harwood)

Years in the making, the Kavango-Zambezi Transfrontier Park is now a reality. The world’s biggest conservation area, known as Kaza, spans five countries and was officially launched in March 2012 after almost a decade of planning.

The ceremony took place in the border town of Katima Mulilo, situated on the banks of the Zambezi River at the eastern end of Namibia’s Caprivi Strip. The town sits plumb in the middle of the transfrontier park and is Kaza’s administrative centre.

Covering an area of almost 444 000 square kilometres and parts of Angola, Botswana, Namibia, Zambia and Zimbabwe, Kaza is located mainly in the wetlands of the Okavango and Zambezi river basins where the borders of the five countries come together.

It’s not the only transfrontier area in Southern Africa, but is by far the biggest.

At the launch, Netumbo Nandi-Ndaitwah, the Namibian minister of environment and tourism, reaffirmed the commitment of the five partner countries to jointly ensure that Kaza is developed sustainably.

“Harmonising natural resource management approaches and tourism development across our international boundaries will enhance the ecosystem’s integrity and natural ecological processes,” she said.

The idea of establishing the Kaza conservation area was first discussed back in 2003, and in the years following the concept gathered momentum.

At Victoria Falls, Zimbabwe, in December 2006 the Kaza memorandum of understanding was signed by ministers of environmental and tourism affairs from the five participating nations.

During a Southern African Development Community (SADC) summit in Luanda, Angola, in 2011, heads of state of the five countries came together to sign a treaty which legally established the boundaries of the park.

The late South African billionaire and conservationist Anton Rupert, a founding member of the World Wide Fund for Nature, was one of the champions of the Kaza cause.

Along with former president Nelson Mandela and the late Prince Bernhard of the Netherlands, Rupert was also a co-founder of the Stellenbosch-based Peace Parks Foundation, another major player in the establishment of transfrontier parks in Southern Africa.

A number of wildlife sanctuaries fall within Kaza, including Simatalele in Angola, Kanyaurira in Zambia, Siachilaba in Botswana, and 19 others.

Kaza incorporates the always-popular Victoria Falls or Mosi-oa-Tunya – the Smoke that Thunders – located on the Zambezi between Zimbabwe and Zambia.

This is one of Zimbabwe’s five World Heritage Sites – the other four are the Mana Pools National Park; the ancient city of Great Zimbabwe; the Matobo Hills; and the Khami Ruins.

Also part of Kaza are the beautiful Lake Kariba, famous for its houseboats and fearsome tigerfish, and the nearby Kariba Dam; the age-old Makgadikgadi salt pans in Botswana; and the Okavango Delta, which sees thousands of animals pouring into the region to romp in the waters during the seasonal inundation.

Those visiting the area for thrills and spills can choose from extreme sports such as the white water rafting associated with the mighty Zambezi, 4×4 and horse trails, hiking, fishing, birding, microlighting, ballooning, elephant safaris, and a host of other activities.

Visitors hoping to learn about the ancient culture of the area will delight in the San Bushman rock paintings in Botswana.

Kaza boasts remarkable diversity in animal, bird and plant life. The area features woodlands and wetlands, around 3 000 species of plants, and over 500 species of birds.

In conservation terms, the park is highly significant as it will eventually be home to 250 000 African elephants, the largest single population of the great animals to be found on the continent.

The establishment of the Kaza area will allow large herds of wild beasts to again assume their traditional migration routes. Botswana’s elephant population is the largest in Africa, while Angola has virtually no elephants, but once the park is in place, the animals will once again be able to move between countries. This natural migration will mitigate the need for culling.

Besides the large elephant population, visitors can see buffalo, hippopotamus and lion, a variety of antelope including sitatunga, puku, lechwe, roan, sable, and eland, as well as zebra, wildebeest, wild dogs, spotted hyena, and many more.

The park’s establishment is also expected to speed up developments such as the SADC univisa, described by Zimbabwe Council for Tourism president Emmanuel Fundira as a “fait accompli”.

All these attractions combine to produce a variety of new tourism opportunities for the region, as well as improved socio-economic development. In 2006 the Peace Parks Foundation and the Development Bank of Southern Africa published a feasibility report in which they stated that, properly managed and marketed, the area could attract up to eight million visitors every year, which will result in increased employment for local communities.