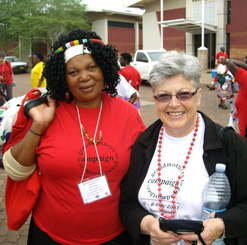 “We are the backbone of our communities;
with our love and commitment we protect
and nurture our orphaned children. Africa
cannot survive without us.” Grandmothers
have become indispensable caregivers in
Aids-ravaged communities across Africa.
(Image: James Hall, Irin PlusNews)

Grandmothers from all over Africa have joined hands with grandmothers in Canada to call for greater support and recognition of their role in caring for grandchildren orphaned by Aids.

“We are the backbone of our communities; with our love and commitment we protect and nurture our orphaned children. Africa cannot survive without us,” declared a manifesto released for the first African Grandmothers’ Gathering, held in Swaziland.

Eunice Simelane, who has supported and cared for five grandchildren since her son and daughter-in-law succumbed to Aids-related illnesses, read the manifesto at the meeting attended by 200 grandmothers from Swaziland, 232 from other African nations, and 42 Canadian grandmothers representing 7 000 others who have formed groups in Canada to raise funds and awareness to help elderly African women struggling to raise Aids orphans.

The first Grandmothers’ Gathering took place in 2006 in Toronto, Canada, the brainchild of former United Nations Special Envoy for Aids in Africa Stephen Lewis. His Stephen Lewis Foundation has been channelling funds to community-led Aids organisations that support grandmothers in 15 sub-Saharan African countries.

Swaziland’s Aids epidemic is among the worst in the world: around 160 000 children are classified as orphans and vulnerable children in a population of less than 1-million – and was a natural choice to host the first Grandmothers’ Gathering held in Africa.

Traditionally the extended family has looked after its own, so there are few orphanages. Grandmothers have become the primary caregivers, but their vital role has been largely overlooked, and their need for help to feed, clothe, house and educate their grandchildren ignored, said Ilana Landsberg-Lewis, executive director of the Stephen Lewis Foundation.

“I was reviewing funding proposals, and many of them dealt with orphan funding, but they seemed written in code. They always referred to ‘guardians and caregivers’, but didn’t say who these persons were. We found the caregivers were the grandmothers of Africa,” she said.

People have given generously to support the Foundation’s programmes, so Landsberg-Lewis wanted her fellow Canadians to meet African grandmothers personally. “They came to Swaziland, paying their own way,” she said. “I knew they would be moved by the heroic grandmothers.”

The three-day conference in Swaziland’s central commercial hub, Manzini, was an emotional meeting, often joyous but sometimes harrowing, with many of the grandmothers giving accounts of abuse and poverty.

The delegates compiled a list of demands from their governments, including financial assistance and sustainable projects, created with their involvement. Swaziland’s prime minister and several cabinet officials attended the gathering.

“The grannies had hoped to be retired now, and to be taken care of by their children, and to play with their grandchildren, instead of having to raise them. This has to be acknowledged and assisted,” said Siphiwe Hlope, executive director of Swazis for Positive Living, a support group for HIV-positive women which organised the event with the Stephen Lewis Foundation.

Hlope led a march in 2009 to protest lavish spending by the royal family, in contrast to the meagre resources for those affected by HIV and Aids, yet she was embraced by the Swazi Queen Mother, who attended the gathering. “We are all grandmothers, and what brings us together is our love for children,” Hlope said.

The grandmothers shared their stories at workshops in Swahili, SiSwati and English. “It was difficult for me to tell my granddaughter that she was HIV-positive, and because of that she was told by the people in the neighbourhood, who made fun of her,” said Esther Mango from Kenya. “She was very hurt. She said, ‘Why didn’t you tell me?'”

They described their battles with discrimination because of their age, gender and HIV status. “When my husband was very sick, his family refused that I visit him in the hospital. He told my eldest son that when he died, no one should marry me because he knew what was ailing him, and he knew that I had it too and would make another ill,” said one woman.

“I went to the hospital after he died and I took a test; I learned I was HIV positive. His family wouldn’t let me see my husband, but it is me who takes care of the grandchildren.”

Staff from the Stephen Lewis Foundation showed African grandmothers how to apply for grants to run community projects. One Foundation project in Kenya employs 300 women who make jewellery that is sold in Canada, and a third of profits used to fund programmes in Africa.