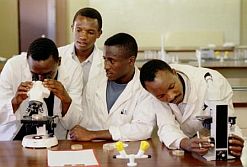 Ethiopia launched its first science academy in the capital city of Addis Ababa on 10 April with the aim of developing scientific research and education in the country.

The Ethiopia Academy of Science (EAS) says its objectives are to promote the advancement of basic and applied sciences, enhance innovative technologies, support and recognise excellence in scientific research performed by Ethiopian scientists, and promote contacts among Ethiopian scientists and those throughout the world.

Academy president Demissie Habte said the EAS also plans to advise government on both natural and social science issues. “Growing political interest in science in Ethiopia has helped get the academy off the ground. There is a much better appreciation in the government for the role science can play in development,” he said.

Habte said scientists first considered the idea for an Ethiopian academy in the early 1960s, but political instability in the country during the 1970s and 1980s saw the plans being put on hold. Researchers at Addis Ababa University, with the support of the UK Royal Society, revived the idea a few years ago.

The Royal Society is one of oldest and most respected scientific academies in the world and has been working closely with Ethiopian scientists for the past 18 months in setting up the EAS. It said it is confident the academy has the potential to be a force for positive change and for practising evidence-based policy in Ethiopia.

Roman Tewolde of the EAS said the academy will work to promote the country’s science agenda, which includes the use of new farming and industrial technology. “The academy will also give researchers financial and technical support, and publish journals and books for scientists and the public,” he said.

Tewolde added that the EAS will be “an independent, merit-based institution committed to assisting the national development agenda, promoting excellence in science and arts, and advancing the nation’s natural and cultural heritage”.

Until now “there has not been a national organisation to speak with authority on behalf of all learned bodies in Ethiopia”, he said.

Habte said the academy will be founded with 50 fellows from both the natural and social sciences. “New fellows will be elected by the members each year, although the small number of senior academics in the country will limit the membership at first.”

He added that the academy will support policy-makers by preparing position papers on the challenges facing Ethiopia, such as rapid population growth and water security.

Scientists have welcomed the launch of the academy. “This is great for our country – it’s something that will bring a wealth of knowledge to our people [and] this continent as a whole,” said Professor Teketel Yohnnes from Addis Ababa University. “Young people who are keen on a career in science can [now] look forward to experiencing and practising their work in their own country.”