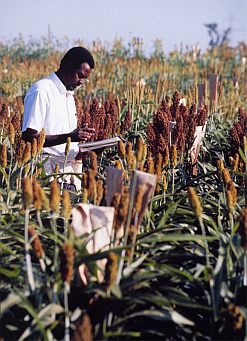 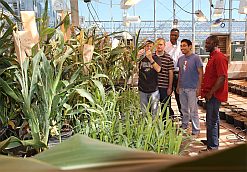 Ejeta and some of his Purdue students.
(Image: World Food Prize) Ethiopia’s Gebisa Ejeta is the 2009 World Food Prize laureate. The plant scientist was acknowledged, among other achievements, for his development of a drought-resistant and high-yield sorghum variety. Sorghum is one of the world’s five most important grains and feeds 500-million people in Africa alone.

He follows in the footsteps of the renowned Monty Jones of Sierra Leone, the only other African laureate, who took the award in 2004 for his work in hybrid rice varieties that can grow in harsh African conditions. Among other projects, Jones worked on the development of the “miracle” hybrid rice, Nerica.

Ejeta’s research into sorghum has changed the fortunes of thousands of small scale sub-Saharan farmers by increasing their crop yield. It has also helped drive the development of the commercial sorghum seed industry in Sudan.

“I focused my research on sorghum because I’m originally from Africa,” he commented, “and I’ve known about the importance of the crop to the people there. So I wanted to work on improving sorghum.”

Over the years Ejeta has inspired and trained a new generation of young African plant scientists. His efforts to improve the lot of subsistence farmers in Africa have resulted in a number of agricultural and educational programmes, such as access to credit and seed markets, which have enhanced many lives.

“Dr Ejeta’s whole life reminds us of the international approach we need to this problem [of hunger],” said Clinton at the announcement.

Ejeta will receive the award, viewed as the Nobel Prize of agriculture and worth US$250 000 (R2-million), at a ceremony on October 15 at the Iowa State Capitol in Des Moines.

Currently professor of agronomy at Purdue University in Lafayette, Indiana, Ejeta had made the university very proud of its son, said Purdue president France Córdova.

“We’re thrilled that he is receiving the 2009 World Food Prize,” she said. “This is a sterling example of Purdue’s commitment to helping resolve the global challenges of world hunger.”

Ejeta grew up in a small hut in a village central Ethiopia and overcame poverty and hardship to become one of the world’s most respected food scientists.

His mother went to great lengths to secure an education for her son, making arrangements for him to attend school in a nearby town. This meant that he had to walk 20km twice a week, to school on Sunday evening and back home for the next weekend, but he proved to be a model student and also passed the high school qualification exam with ease.

With financial sponsorship the young Ejeta enrolled in the Jimma Agricultural and Technical School, a project of Oklahoma State University under the US government’s Point Four Program. Here, too, Ejeta made his mark, graduating with distinction and then moving on to obtain a BSc in plant science from Alemaya College in 1973.

Such was his prowess that his tutor at college introduced him to Purdue University’s John Axtell, a sorghum researcher of note. Axtell saw the potential that waited to be tapped, and invited Ejeta to become his graduate student at Purdue.

Ejeta accepted, but had no idea at the time that he would be unable to return to his homeland for 25 years because of the political turmoil that was about to unfold. In 1974, the same year that he entered Purdue, the peace-loving emperor Haile Selassie was deposed by the brutal Derg, a communist military junta that wasted no time in establishing a one-party communist state.

This was just the beginning. Under the rule of communism the country’s fortunes slid into misery until 1991, when the genocide Mengistu Haile Mariam was chased from Ethiopia, paving the way for a transitional government.

Meanwhile, Ejeta had no trouble in obtaining his doctorate in 1978 in plant breeding and genetics at Purdue, and later joined the staff. Today he holds a distinguished professorship.

After his PhD, Ejeta took up research at the Sudanese branch of the International Crop Research Institute for the Semi-Arid Tropics. This was where his first hybrid sorghum variety took root, and today many millions of poor sorghum farmers and their families have benefited from its drought-resistant and high-yield qualities.

Released in 1983, the Hageen Dura-1 outperformed itself in the field, surpassing the 50% to 100% gains recorded in the trials and producing yields of up to 150%. By the turn of the century the crop was growing across more than a million acres in Sudan alone.

Ejeta was so inspired by the positive reaction of impoverished farmers that he set up educational programmes to train them in the efficient use of fertilisers, soil and water, as well as structures to monitor production, processing and marketing of the super-sorghum.

Ejeta and his students at Purdue later developed another hybrid for Niger, a country with more than 80% of its surface under the unforgiving sands of the Sahara desert. The drought-resistant AD-1 hybrid has helped farmers to reap yields of up to five times the national sorghum average.

More research in the 1990s brought a breakthrough in Ejeta’s mission to boost African food production. He developed a sorghum variety that does not succumb to the devastating parasitic Striga weed, or witchweed – viewed as the greatest obstacle to sustainable food production in Africa.

Striga attacks grains and essential crops such as sugarcane, maize, rice, millet, barley and sorghum. Its pretty flowers belie the fact that it is capable of laying waste to entire smallholding crops, bringing ruin to subsistence farmers. The parasite has no substantial root system of its own and invades the root systems of other plants, stealing essential nutrients and stunting growth.

The United Nations, in a 2009 report released under its Environmental Programme division, estimates that Striga infests 40% of Africa’s precious fertile land, and affects over 100-million people on the continent.

The significance of Ejeta’s Striga-resistant sorghum was therefore immense, especially since all previous scientific attempts to defeat the weed had failed.

Ejeta and Purdue colleague Larry Butler identified the sorghum chemical that attracts the Striga. From there, the two developed a process to stop the release of this chemical in a range of sorghum varieties, at the same time conferring on the grain the ability to adapt more readily to various ecological conditions in Africa.

In 1994, with the help of Christian poverty alleviation organisation World Vision International, Japanese philanthropical organisation Sasakawa, and USAID, Ejeta managed to distribute eight tons of the wonder sorghum in 12 countries, including Zimbabwe, Mozambique, Eritrea, Kenya and Mali. Since then farmers have enjoyed up to four times the yield they reaped previously.

He plans to continue his work into sorghum genetics and food developmental work. “The need out there is great, so there is more to do. We need to encourage the development of similar advances in maize, millets and other crops of Africa.”