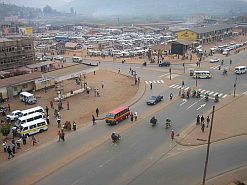 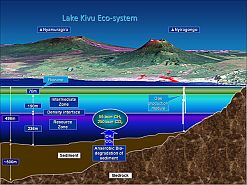 The schematic demonstrates how gas will
be extracted from Lake Kivu.
(Image: Kivu Gas)

Rwanda’s bid to complete its first major gas-power generation project has been boosted by a recent investment guarantee from the Multilateral Investment Guarantee Agency (Miga).

Miga’s guarantee on the KivuWatt project will be handled by ContourGlobal, a New York-based company developing Rwanda’s largest methane-gas extraction and power-generation facilities. The group announced the assurance fund on 5 May 2011.

“Miga’s issuance of this guarantee package is an important development milestone for the KivuWatt project and comes as the project is just one year away from full operations,” ContourGlobal CEO and President Joseph C Brandt said in a media statement.

The US$142-million (R960-million) KivuWatt project, under way at Lake Kivu in Kibuye, will result in the generation of much-needed electricity for Rwanda. A 25 MW power plant to support the national grid will be created in the area after the completion of the project’s first phase.

It’s expected that phase two of the project will expand power generation capacity to 100MW.

ContourGlobal has applied for a $99-million (R669-million) guarantee from Miga, a World Bank member designed to stimulate investments in developing countries, for guarding against risks such as expropriation, transfer restriction, civil war and breach of contract. The guarantee is effective for 20 years.

Methane gas from the waters of Lake Kivu will be processed to produce electricity. The gas was discovered in 1936, apparently after people realised the lake had fewer fish than other bodies of water in the region. Comprehensive studies on the lake’s potential to produce electricity started in earnest in 1976.

Lake Kivu is one of Africa’s great lakes, bordering Rwanda on the one side and the Democratic Republic of Congo on the other.

ContourGlobal said a lake barge, from where gas extraction will take place, is nearing completion and its launch is expected to take place in early June 2011. KivuWatt is scheduled to start production by 2012.

Construction of the power-generating station was set to begin in May 2011. A Finnish electrical company Wartsila is currently manufacturing the electricity-generating engines and will also build the plant, said ContourGlobal.

“We are grateful to Miga for their dedication, support and the leadership they have shown in committing to the project at this critical stage,” ContourGlobal’s Brandt said.

ContourGlobal has announced that it will also bankroll a new financing scheme with a lending consortium that includes the African Development Bank, the Emerging Africa Infrastructure Fund, and FMO – the Dutch development bank.

Miga bought into KivuWatt after identifying it as an important project that would stimulate Rwanda’s economic growth, the agency said.

“Rwanda has tremendous potential for economic growth, but the persistent challenge of a lack of power infrastructure has been a huge constraint,” says Izumi Kobayashi, Miga’s executive vice president.

“We are pleased that we were able to facilitate this investment into a complex renewable project that will help Rwanda achieve one of its key development objectives.”

The Rwandan government has a steep challenge to improve the country’s electricity generation capacity. It’s set out to expand capacity to at least 130MW by 2012 through hydropower and methane gas power projects.

The country’s total installed power generation capacity is currently under 100MW and less than 10% of the population is on the national power grid. Until now the country has had to rely on expensive diesel generators for power.

Its electrified regions, mostly cities, were plunged into darkness in 2004 due to load shedding. The Ministry of Infrastructure said it was that year’s severe power shortages that “prompted the government to hire emergency power solutions and invest in increasing generation capacity”.

The methane in Lake Kivu needs to be exploited for electricity as its abundance may be detrimental to the environment within 100 years, studies have found.