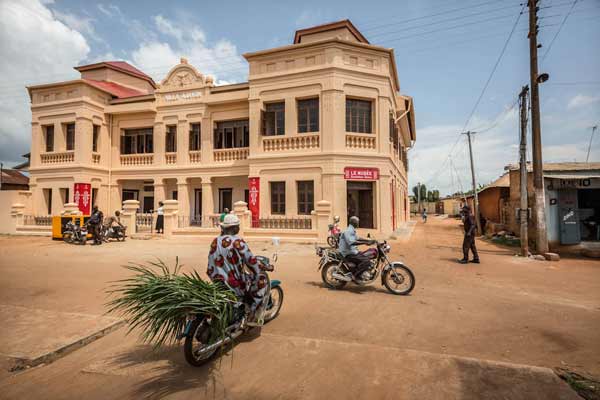 The first contemporary art museum in West Africa is putting the tiny country of Benin on the art map. The free museum, called the Zinsou Museum, is in the small town of Ouidah – often called the birthplace of voodoo. (Image © Jean Dominique Burton, The Eye of Photography)

The first contemporary art museum in West Africa is putting the tiny country of Benin on the art map. The free museum, called the Zinsou Museum, is in the small town of Ouidah – often called the birthplace of voodoo.

The aim is to preserve African art for Africans, as well as showcase the continent’s most leading-edge artists. It is dedicated exclusively to ultra-modern African art. Opened in November 2013, the permanent art exhibition is the first of its kind in sub-Saharan Africa outside South Africa. An initiative of the Zinsou Foundation, it is making contemporary arts and culture accessible to the Beninese public.

A smattering of tourists visit the town, usually headed for the Gateway of No Return, a mammoth monument dedicated to the area’s dark history as a slave trading hub. But things are changing since the art museum opened. The slave trade monument is a massive archway with two long lines of chained men in bas-relief along the top, suggesting they are being marched into the Atlantic Ocean. Hundreds of thousands of Africans were believed to have been condemned to slavery from the beach below the archway.

Villa Ajavon, which houses the Zinsou Museum, in a sense defies that history: it was built by the descendants of slaves who returned from the Brazilian city of Bahia. Its style is influenced by Brazilian and African architecture. According to the museum, in the sparsely visited nation of Benin the museum has attracted an impressive 13 000 visitors since opening. “The museum is an attempt to engage the Beninese public by creating a shared space anchored in everyday life and writing artistic culture from the perspective of the development of our society in the world.”

Contemporary African art has grown in popularity over the past few years, gaining much reputation and monetary value. Artistic hubs like Lagos, in Nigeria are frequently visited by curators and collectors from North America and Europe seeking new talent and new works by established names.

Villa is a sublime home

Marie-Celine Zinsou spearheaded the creation of the museum. Explaining her motivation to Agence France-Presse (AFP), she said that while on a trip to Benin with a French children’s charity in 2005, she had wanted to take a group of youths to an art gallery. “I found that there wasn’t any structure to show the children work from their own continent.

“When we found out this sublime building was available, we jumped at the chance. Its style is very symbolic, very specific to this region,” she said. The villa is on a quiet dirt road lined with run-down bungalows and is just a few hundred metres from the Temple of Pythons, a major centre of voodoo worship that retains a powerful influence in Benin.

Villa Ajavon is an expansive cream-coloured home built in 1922 by a Togolese trader. It was in poor repair and took a year to renovate to host the gallery. But Zinsou said the priority was to preserve its original structure. Air conditioning in the main hall was forbidden so as to not disfigure the exterior.

Fondation Zinsou was launched in 2005 by the Franco-Beninese financier Lionel Zinsou, 59. A graduate of the Ecole Normale Supérieure in Paris and the London School of Economics, he started his career as an adviser to Laurent Fabius, then prime minister of France; thereafter, he became a partner at the Rothschild bank. Since 2008, he has headed the investment fund PAI Partners.

It is a family-run enterprise based in Cotonou, Benin. As an exhibition space for contemporary artists, the foundation has created a permanent collection over the past eight years. It has also established a strong network with artists and the media.

“Over the next eight years, it welcomed four million visitors, starting with schoolchildren and followed by their parents. At the same time, the foundation built up a collection of African art, past but above all contemporary,” said Zinsou.

According to its profile on the Global Art and the Museum website, the foundation has maintained an international standard despite the virtually non-existent art market in many African countries. It receives its funding mainly from the Zinsou family’s private income.

The museum’s inaugural exhibition, Masterpieces of the Collection, featured 13 African artists, such as Romuald Hazoumé and Cyprien Tokoudagba from Benin, George Lilanga from Tanzania, and Samuel Fosso from Cameroon. Many of the works were drawn from the Zinsou Foundation’s permanent collection. Artists commissioned for the exhibition included Aston and Kifouli Dossou.

Today, the works of leading African artists are on display, including Ethiopia’s Mickael Bethe-Selassie, Frederic Bruly-Bouabre of Ivory Coast, and Cheri Samba of Democratic Republic of Congo.

Hazoumé has exhibited his paintings, sculptures and photographs in London and New York, but became emotional recalling his first showing in Benin, the country of his birth. “It was the first time that I saw young people from Benin coming to admire my work,” he told AFP. “I cried that day. I was so moved.”

Hazoumé’s paintings and photos reflect his Beninese culture and religion.

By exhibiting the works of local and international artists, the museum acts as a marker of Africa’s significance to the art world. Its mission is to preserve African artistic heritage within the actual continent, and it will also display archival documents to contextualise the works and encourage research and familiarity with the history of art in Africa.

“Keeping contemporary African art in Africa today is a genuine necessity, as African artists flee the continent, where the market for their work is almost non-existent,” said Elizabeth Vaupres of Foundation Zinsou. Internationally known galleries such as those in Cairo or Dakar showcase a rich artistic legacy but “mostly evoke history”, she said.

For nearly 300 years, until slavery was abolished in the 19th century, millions of people were shipped from West Africa’s Slave Coast, of which Benin was a hub. Ouidah was in the Abomey kingdom and was one of the main ports of departure for the slave trade in the 16th and 17th centuries, which brought prosperity to its rulers. Several European powers, including France and Portugal, built forts here to protect their commercial interests.

Seen as a religious centre, it has long been associated with Vodun – and subsequently voodoo – beliefs. Some see it as their global capital. Following the defeat of King Behanzin and colonisation by the French, the town became a seat of local government. France outlawed slavery in 1818.

Ouidah was the site of the Tree of Forgetfulness; enslaved men, women, and children were forced to circle the tree seven times. It was thought this would make them forget their identities and erase their collective memory of origin and histories before being shipped off to the Americas. Although it may have been a process that was more metaphoric than real, the histories and cultures that were allegedly forgotten are now preserved in the art museum.

The museum’s location indicates that the institution “embodies the idea that Africa is looking to the future, but in doing so does not deny its past”, Zinsou explained. Ouidah is hoping to become a cultural hotspot. The city already hosts an annual international film festival, which featured movies from 18 countries last year.