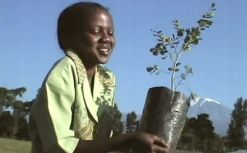 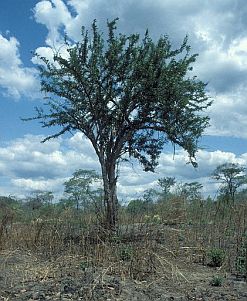 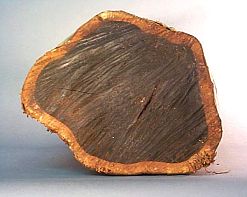 A cross section of the mpingo tree,
showing the yellowish sapwood without,
and the dusky heartwood within. (Image:
African Blackwood Conservation Project)

In a first for the African continent, the Forest Stewardship Council has bestowed its certification for community-managed natural forest on two communities in Tanzania for their care of the African blackwood, that country’s national tree.

Africa’s blackwood, or mpingo as it is known in Kiswahili, is native to 29 sub-Saharan African countries. It occurs in a range that extends roughly from the Sudan south to Mozambique and north-eastern South Africa, across to Angola on the west coast, and then north as far as Nigeria and west as far as Senegal. It is classified as Near Threatened on the Red List of the International Union for the Conservation of Nature.

The blackwood (Dalbergia melanoxylon), a member of the rosewood family, is highly sought after like its relatives the Brazilian, Indian and Honduras rosewoods. The African variety, which grows abundantly although slowly, is ideally suited for the manufacture of woodwind instruments such as piccolos, wooden flutes, clarinets and oboes. This is the wood’s primary economic use.

Not only is it snapped up by instrument craftsmen around the world, but local wood carvers, notably the Makonde people who live in the tree’s main growing region on the Tanzania-Mozambique border, use it extensively. Furniture makers also prize the valuable commodity, and it is said that the ancient Egyptians used the wood in their furniture building.

The Forest Stewardship Council (FSC) is an international non-profit body that works to promote responsible management of the earth’s forests. The FSC certification is viewed as the gold standard in worldwide forest management and conservation. Certified forestry organisations are entitled to use the FSC logo and thereby help consumers to identify products that are harvested responsibly and sustainably.

To date, over 50-million hectares of forests around the world have been FSC certified.

Proper management of the forests is the key to their preservation and profitability. Trees take upwards of 60 years to reach maturity and become commercially viable, so careful monitoring and management is necessary to prevent over-harvesting which will result in the species becoming endangered.

Tanzanian communities are assisted in this endeavour by the East Africa-based Mpingo Conservation Project, an organisation that promotes sustainable harvesting of valuable indigenous timber and works for conservation of endangered forest habitats.

“In this time of global economic crisis,” says a spokesman from the Mpingo project, “it is important to remember that even small consumer choices can make a huge difference to poor communities in the developing world, providing them with an opportunity for a hopeful and sustainable future.”

Because the wood is so sought-after, illegal logging is widespread and poor communities that derive a livelihood from the surrounding forest are often deprived of benefits they might otherwise enjoy.

The groundbreaking FSC certification achievement will enable the two communities, both situated in Kilwa District, south-east Tanzania, to earn up to 250 times more for harvested wood than before, affording them the opportunity for a brighter future.

By managing their current 2 420 hectares of forest responsibly, local folk can ask for, and receive, a much better price on sustainably-harvested timber. UK-based conservation organisation Fauna & Flora International predicts that communities will soon be earning in excess of US$19 (R158) per log compared to the paltry eight cents (67 cents) they received previously.

Communities may also take advantage of Tanzania’s Participatory Forest Management scheme, which allows them to take over the ownership and control of surrounding forests from the government, but they first have to show that they are competent enough to do so. Then, with their FSC certificate in hand, communities have proof that their timber is sustainably harvested and can ask, and receive, a fair price for their labours.

The initiative will also benefit the miombo woodland ecosystem, a dry forest-savannah biome that covers the greater part of southern Africa. This ecosystem is important because it supports many forms of wildlife including lion, buffalo, warthog, elephant, and African wild dog.

According to the World Wildlife Fund, the area supports what may be the largest populations of African elephant (Loxodonta africana) and African wild dog (Lycaon pictus) on the continent.

The FSC certification takes effect in time for the first harvest in June 2009. Because the wood requires at least a year’s slow drying time to avoid the risk of splitting, it is expected that the first FSC-certified instrument will only be available in 2011.

The Mpingo Conservation Project hopes that its blackwood initiative will become the flagship of many more woodland conservation success stories.

With its grey bark and spiny shoots, the African blackwood may look scruffy on the outside, but its heartwood is a lustrous inky black and can vary from dark brown to a purple-indigo. The heartwood is extremely resistant to decay. Top quality timber can fetch up to $18 000 (R150 000) per cubic metre, according to the Mpingo Conservation Project.

It is said that between 7 500 and 20 000 African blackwood trees get the chop each year, destined to become the highest quality musical instruments.

The wood used to be referred to as ebony, but the true ebony tree belongs to another unrelated genus known as Diospyros. Among these are D. ebenum, known as Ceylon ebony and native to southern India and Sri Lanka.

Blackwood’s dense grain is naturally impregnated with oil, meaning that sound waves vibrating inside an instrument’s bore do not get absorbed by the wood, resulting in a brighter sound. The natural oils also protect it from degradation caused by players’ breath and saliva.

Its fine grain means that it can be turned and bored easily, and its density, roughly that of cast iron, is so robust that it easily and accurately accepts the metal screw threads of keys. The wood is tough enough that it has been known to dent and blunt cutting tools. It is stable under extremes of humidity and temperature, and its beautiful finish makes it the wood of choice for woodwinds.

American master flute maker Casey Burns, who also uses South African-sourced mopane wood for his creations, recently claimed that African blackwood is now the standard by which all other blackwoods are judged in the manufacture of woodwind instruments. 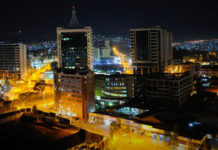