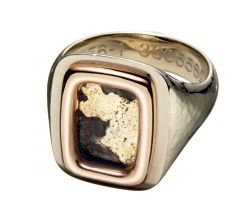 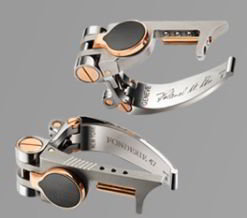 The purchase of a set of mechanical
cufflinks destroys 100 assault rifles
in Africa
(Image: Fonderie 47) 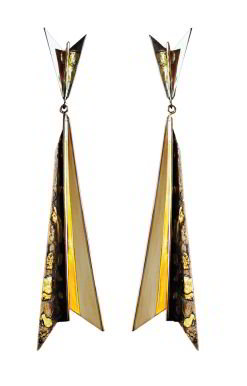 An international project has pledged its support to bring an end to the destruction caused by illegal assault rifles in Africa’s war zones – and they are using jewellery made from AK-47 rifle parts to achieve this.

Who would have thought that the parts of AK-47 assault rifles, synonymous with fear and violence, could be transformed into beautiful high-end jewellery?

A New York-based jewellery manufacture project is doing just this. Fonderie 47 is removing AK-47s from war-torn countries in Africa and transforming the metal nuts and bolts into individually-designed watches, accessories and earrings.

Fonderie 47 is more than just a jewellery manufacturer with a clever idea – its main goal is African disarmament.

It was founded in November last year by businessman and philanthropist Peter Thum, as well as entrepreneur, designer and educator John Zapolski, in response to what they saw on their extensive travels throughout Africa.

For years, the illegal use of assault rifles has caused devastation in Africa’s war zones and seeing weapons in the hands of children was a great concern for the two entrepreneurs.

Throughout the world, the USSR-developed AK and its variants are the most commonly smuggled small arms sold to governments, rebels, criminals and civilians.

In Africa, access to rifles is easy and the going rate is low. In countries such as Somalia, Rwanda, Mozambique, Congo and Tanzania, prices for AK-47s range between $30 (R226) and $125 (R943) per rifle. These prices have fallen further in the past few decades because of mass counterfeiting.

“A transformation is needed to break the cycle of violence in Africa. To this end, we are turning the power of the AK-47 against itself,” Thum says. “Not only do we destroy these weapons, but we invert what they stand for by remaking them into wearable art.”

Thum explains that the AK-47 weapons that are used to produce their jewellery all come from the Democratic Republic of Congo (DRC).

The venture has been very successful – both in removing arms from Africa and making luxury jewellery.

In partnership with the Mines Advisory Group, a non profit organisation that works to clear landmines and other remnants of conflict, Fonderie 47 has funded the destruction of over 10 000 assault rifles in the DRC, and they plan to expand the reach of these programs.

To date, they have also funded weapon destruction programs in the DRC, even though their materials are not sourced from these programmes. “That material is recycled by the government of the DRC locally,” he says.

Fonderie 47’s material comes from weapons that were confiscated from poachers in the Virunga National Forest in the DRC’s North Kivu Province. The forests are part of the Virunga National Park, a world heritage site, which was established as Africa’s first national park in 1925.

“We destroy the weapons there locally with the assistance of local craftsmen and then transport the material back to the United States,” says Thum.

The items are sold at private events around the world and the sale of each item, along with donations from individuals and foundations, fund programmes to destroy more assault rifles in Africa.

“We have not yet sold any pieces in South Africa, or Africa, but we very much would like to,” he says.

The items all have a common theme of bold, angular design. The colours vary from brushed amber and silver to shades of yellow, creamy brown and marbled patterns.

Some of the pieces such as the cufflinks look almost mechanical, and you can image its previous function as an important lever or joint in the rifle.

Creating jewellery of this nature is a challenge because the material has to undergo many steps of preparation, before it is ready to be used.

“In comparison with softer metals such as gold, which we also use, it requires much more planning, experimentation and effort,” Thum says.

The founders had to find designers with the skill to work with a difficult medium.

They spent months searching for the right designers.

“Now we’re working with designers who have a natural affinity for Fonderie 47’s mission, vision, skill in design, craftsmanship, persona, and aesthetics,” he explains.

“While we create rare objects, their true value emanates from the principles, purpose, ideas, and skill that go into them,” Thum says. “The pieces are not merely beautiful – they have real impact on the world.”

Thum and Zapolski never expected the project to draw so much attention.

“The response has been a little overwhelming,” Thum says.

Each piece of jewellery that is created and sold is a visible reminder that the removal of weapons in Africa is gaining momentum.