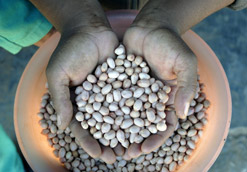 “I often hear it said that Africa is running
out of food per head,” says analyst Steve
Wiggins. “Now unless these statistics are
complete and utter junk, that just simply
isn’t true. The index shows 16%, 17%,
18% more food being produced per capita
compared to the early 1980s.”
(Image: MediaClubSouthAfrica.com image
library)

Suddenly, after 20 years of relative neglect, African agriculture is a hot topic, with a substantial growth in production and a new interest among major donors in funding the sector.

That is the message emerging from the African Seminars Series now taking place in London, a gathering that examines the constraints and opportunities facing Africa’s farmers.

The figures being presented are impressive and, according to Steve Wiggins, who leads the agriculture programme at Britain’s Overseas Development Institute, confound the pessimists who assume the situation to be much worse than it is.

“I often hear it said that Africa is running out of food per head,” he told the seminar. “Now unless these statistics are complete and utter junk, that just simply isn’t true. The index shows 16%, 17%, 18% more food being produced per capita compared to the early 1980s.”

In particular, he said, two regions – West Africa and North Africa – were surging ahead, although there were signs that production in East Africa too might now be beginning to accelerate.

“For those of us working on Africa, people use Asia as a stick to beat us with,” Wiggins said. “Well, as far as I can see, there are two bits of Africa there which have done every bit as well as Asia has done over the last quarter of a century.”

Wiggins’s fellow speaker at the opening session was Ousman Badiane, the Africa director of the International Food Policy Research Institute in Washington. He put his finger on the mid nineties as the point when Africa really turned a corner.

With no other overall change which could account for this recovery, Badiane attributed it to the structural adjustment programmes which so many countries had been persuaded to follow.

“I believe it was the result of those strong and messy reform programmes of the 1980s. I remember the pain of it, but it completely changed the environment for agriculture.”

Both speakers were agreed that the food price spike in 2008 and the world economic crisis pose both challenges and opportunities for African farmers. They worried about a growing protectionism in Asia – a major potential market for African agricultural produce – and about the fact that the speed of Asian development may have closed a window of opportunity for African’s own industrialisation.

As Steve Wiggens said, “The single biggest stimulus to most farmers is a thriving local city.”

Above all they worried that the gains of the last 20 years might be reversed. Ousman Badiane referred to a new law passed in Kenya to restore price controls on agricultural produce.

“That’s where Kenya was 25 years ago,” he said. “The danger is that the generation of leaders that went through the pains of those reforms are no longer active. So those leaders today can make the same mistakes as the leaders of 25 years ago.”

He added: “It is just for me unimaginable that a farmer stands up every day, produces the food and someone claims that is a common good: – ‘It’s our rice, it’s our maize.’ It’s amazing. Nobody goes to the farm with them, but once they produce the product, everybody claims it as their own. That has to change. It’s a private product; it belongs to the farmers. And they have to be able to sell it for the price that the market offers.”

Ousmane Badiane sees the African Union‘s Comprehensive Africa Agricultural Development Programme (Caadep), in so far as it gives a voice to farmers, as an influence against this kind of reversal of policies.

The first two seminars both sparked discussion of Caadep, which obliges member governments to devote 10% of their national budgets to agriculture and encourages them to produce a coherent plan to which donors can subscribe.

But there was a considerable level of scepticism about Caadep. One participant, currently working in Malawi, described the frantic rush to produce a programme to put before donors, and said he had seen no evidence of new money becoming available.

This was echoed by Christie Peacock, chief executive officer of the NGO Farm Africa. “There’s so little vision,” she said. “I’m very sceptical about the Caadep process. It’s supposed to be African led, but it’s often a very top-down process.”

She echoed the reservations expressed by several participants, that even if new money was now being offered for agricultural development, both through Caadep and from the US government’s Feed the Future programme, there was no well-thought-out plan about how it should be used. “I think we are visionless at the moment,” Peacock said, “and after 20 years of lack of interest, we are in danger of reinventing the wheel all over again.”

But the keynote speaker at the second seminar, Professor Sir Gordon Conway, author of The Doubly Green Revolution, was more optimistic about funding: “I do think there will be money – about a billion dollars of USAid [US Agency for International Development] money this year, and a billion plus next. Not perhaps the $3.5-billion that has been talked about, but around $2.7-billion will be there.”

“Twenty years ago there was a view that African didn’t need agricultural development, that the private sector would do it all, and among some donor agencies that view is still there. But as a result of the food price crisis we have things like the Feed the Future programme, which looks for countries’ own plans. It recognises that countries are different, asks what they intend to do, and acts accordingly, and I think that’s quite a good approach.”

The African Seminar Series is organised by the Future Agricultures Consortium and the Overseas Development Institute. Further sessions on markets, land issues and agriculture-led development in an urbanizing world will take place between now and the beginning of September.