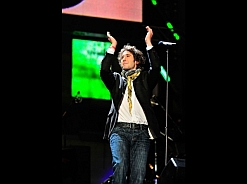 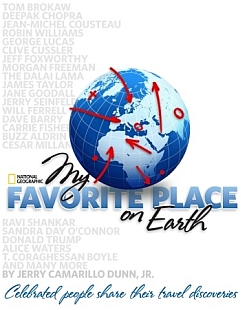 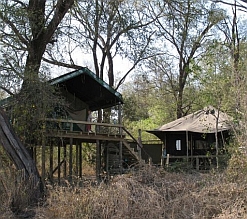 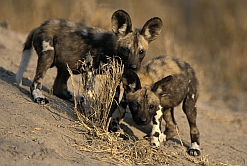 The African Wild Dog is the continent’s
most endangered predator.
(Image: Wikimedia)

South Africa’s ever-growing desirability as a tourist destination has been further endorsed by superstar singer Josh Groban, who names the country as his favourite place on earth, while National Geographic editor Chris Johns holds similar sentiments for a wild dog research camp in Botswana. This is revealed in a new travel book recently published by National Geographic.

The book, titled My Favorite Place on Earth, written by award-winning travel writer Jerry Camarillo Dunn, appeared on shelves on 21 April 2009. In it, Camarillo picks the brains of 75 of the most prominent people of our time, asking them simply, “What is your favourite travel discovery?”

All took the time to share their experiences and recommendations, describing in detail those unique qualities of their chosen destination that are particularly appealing to them. Their engaging narrative is enhanced by the author’s contribution in the form of interesting National Geographic facts and web links related to each place.

“Their choices are fascinating and quirky,” wrote an appreciative Dunn in the book’s foreword. “I sent out hundreds of letters to people I admire,” he added, “explaining the book and asking them to be part of it. Sometimes success was sublimely easy … other times, sublime turned to ridiculous. I called on every friend who had even a sixth-degree of separation from a celebrated person I sought.”

Popular singer Groban has toured South Africa on a number of occasions, most recently in March 2008, and has built a solid fan base in the country. His albums have topped the charts there, reaching platinum status.

During Groban’s first South African tour in 1994 he met former president Nelson Mandela and was inspired to establish his Josh Groban Foundation, which helps disadvantaged children in developing countries with educational and healthcare necessities. Later, the revered elder statesman named Groban as an ambassador of his Aids awareness organisation, 46664.

“I had wanted to visit South Africa for many, many years,” said Groban, “and it was life-changing because I made sure to take some extra time off to meet with Nelson Mandela and understand firsthand what his organisation, 46664, is doing for Aids awareness in South Africa.”

Since then Groban has collaborated with top local musicians such as Vusi Mahlasela, and Grammy winners Ladysmith Black Mambazo and Dave Matthews, born in Johannesburg but now an international star based in the US.

Johns names the Botswana Wild Dog Research Project, located near the Moremi Game Reserve on the west side of Botswana’s Okavango Delta, as his favourite place of all.

Established in 1989 by renowned American wildlife biologist Dr John “Tico” McNutt, the camp is dedicated to the conservation of Africa’s most endangered large carnivore, especially in situations where the creature comes into contact with human communities. McNutt started the project as part of his studies towards his doctorate in animal behaviour, and to date it is the longest-running research facility for large predators in Botswana.

In the book, Johns described his meeting with the biologist and his adventures at the Wild Dog Research Project. “The camp has nice double-roofed tents and a community kitchen outdoors. During the day, baboons wander through, and a lot of nights we’d have lions.

“My tent folds out on top of my Land Rover,” wrote Johns, “so I sleep up there and some nights I’d hear this BDRRRbdrrbdrr sound, quite loud. I’d wake up, look out through the bug netting in my tent, and be eye to eye with an elephant – literally inches away. Occasionally, elephants would bump the Land Rover and rock it a little bit while I was sleeping. The Okavango is truly a wild place.”

One of Africa’s most efficient predators, the African wild dog (Lycaon pictus) is listed as endangered on the Red List of the International Union for Conservation of Nature (IUCN). In terms of IUCN criteria, this means that available evidence points to the species facing a very high risk of extinction in the wild.

The animal’s greatest threats are infectious disease such as rabies and distemper, and man, with whom it conflicts because of its tendency to wander far and wide. Research undertaken in Tanzania’s Serengeti indicates that the wild dog’s average roaming area covers some 1 500 km2.

Once found in their thousands all over the continent, wild dogs have disappeared from most of their former habitat in west, central and north Africa. Now, significant numbers are found only in southern Africa and the southern part of east Africa.

The latest data estimates the current number of free-ranging wild dogs to be no more than 5 500, and the numbers are decreasing.

Research at the camp focuses on issues such as habitat and prey species preferences, reproduction patterns, and the health of the population. The success of McNutt’s wild dog research has allowed the programme to evolve to cover other large species predators found in the area, namely the spotted hyena, leopard, lion and cheetah.

Now known as the Botswana Predator Conservation Programme (BPCP), the project has three main aims – to use research and education to promote sustainability of Botswana’s large carnivores and their habitats; to contribute to ongoing management programmes and to augment these by developing new techniques that protect threatened carnivores and their habitats; and to educate and mentor the Batswana in appreciating their natural heritage, so that in the future they may become its custodians.

“BPCP’s research on wild dogs has made it abundantly clear,” said McNutt, “that the health and welfare of not just the wild dog population but the entire predator population is a key indication of health of the ecosystem. Our project has evolved into an ongoing program of applied research and conservation focusing on the entire large predator guild.”