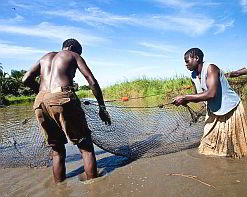 An estimated 16.6% of children in the
Phalombe district of Malawi are severely
malnourished, while 49.3% are generally
malnourished. The community has started
fish farming to help reduce child
malnutrition.
(Image: flickr.com)

With the help of a local aid organisation, rural communities in Malawi are fighting child malnutrition by farming fish and growing fruit trees in small orchards around their homes.

According to the draft Malawi Growth and Development Strategy II (PDF, 384KB), many children suffer from high levels of nutrition disorders such as underdevelopment, wasting and being underweight. This is particularly prevalent in the country’s rural areas.

Although there is still the challenge of a lack of awareness of nutrition issues among the public, there has been a drop in child malnutrition cases over the past five years, the strategy document states.

Gertrude Saima, a community-based farmer from Lomoliwa village in the Phalombe district of southern Malawi, believes the significant drop in cases in their village over the past five years is due to the development of fish farms in their areas.

“I can say without fear that malnutrition has been alleviated in our village. If you walk around the village you will not find malnourished children.”

Farmers in the Phalombe district believe that with the help of the Blantyre Synod Development Commission (BSDC), these statistics will continue to drop. Saima said they now have the knowledge and means to reduce malnutrition and are motivated by the improvements they are already witnessing.

“There used to be a lot of children with malnutrition in the village and we used to spend a lot of time and money in caring for them because they were always sick. Now we are seeing less and less of that.”

Saima said as a community they knew it was up to them to work together to reduce malnutrition. “The answer lay in availability of land and water.”

The community went to speak to the village chief and together they came to a decision to start rearing fish in ponds.

“We had land and strength to dig the fish ponds, but we lacked the skills in managing the fish,” she said.

“Blantyre Synod also taught us how to prepare the fish so that we get better nutrition out of it,” said Saima.

The organisation took community members on an educational visit to learn about integrated agriculture and aquaculture where they learned about rearing fish in ponds alongside goats and ducks on the land.

BSDC also taught the villagers how to graft fruit trees. Saima said they are grateful for skills the organisation has taught them. “The village has blossoming orchards of mangoes and oranges in the backyards of most homesteads.

“I never thought I would ever have fruit trees of my own. Now I have oranges right around my house and can pick one and eat it any time I want.”