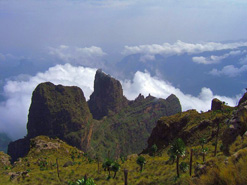 The view from Imet Gogo near Geech
camp, Semien Mountains near Ras
Dashan. 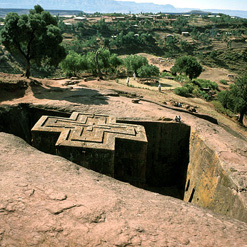 Bet Giyorgis, one of the mysterious
cross-shaped churches hewn out of rock
at Lalibela. 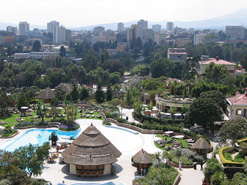 A view of Addis Ababa, Ethiopia’s capital
and largest city, from the Sheraton hotel. 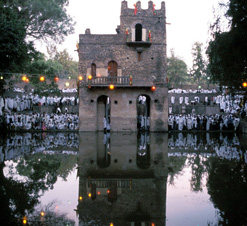 Crowds gather at the Fasiladas’ bath in
Gondar, Ethiopia, to celebrate Timket –
the Epiphany for the Ethiopian Orthodox
Tewahedo Church.
(Images: Wikipedia)

Still stuck on the image of Ethiopia as a land of war and famine? Think again.

These are the little-known facts about this Horn of Africa nation: it is the third most populous country in Africa at 74 million, is twice the size of France, and the climate in the highland capital of Addis Ababa is more akin to Johannesburg than nearby sweltering Khartoum, Sudan.

After the ousting of a military dictator nearly two decades ago, Ethiopia has been one of the most stable countries in an African region home to such failed states as Somalia or rogue states such as Sudan, with its crisis in Darfur.

But the current Ethiopian government is functional and thriving only in comparison to others in its neighborhood. Its human rights record has been criticised by the US State Department and the nation’s last election, in 2005, was marred by violence and irregularities.

Despite these setbacks, Ethiopia has shown steady economic improvement in the last decade, including in the tourism sector, and is one of the world’s least-explored gems.

To travellers and students of history, Ethiopia is a magical and enchanting land because of its vivid, uninterrupted connection to antiquity and the larger canvas of recorded human history.

Archeological finds have pointed to Ethiopia as the birth place of the oldest Homo sapiens. Pre-Christian Ethiopia was a major player during antiquity – the Old Testament mentions Ethiopia dozens of times.

Ethiopia’s ancient empire extended on both sides of the Red Sea – Ethiopian kings frequently ruled over south Arabia. Around the time of the birth of Christ, Ethiopia was a centre of commerce and learning along with Egypt, Persia and Greece.

“Ethiopia always had a special place in my imagination and the prospect of visiting Ethiopia attracted me more strongly than a trip to France, England, and America combined,” Nelson Mandela wrote in his autobiography, Long Walk to Freedom. “I felt I would be visiting my own genesis, unearthing the roots of what made me an African.”

With Axum at its capital, in what is now Tigray Province, Ethiopia’s recorded history dates back to 1 000 years before the birth of Christ.

Its founding mythology is still steadfastly held by many modern Ethiopians, that a union of King Solomon and the Queen of Sheba begat a royal line that extended from Menelik I to Haile Selassie, whose reign was overthrown in 1974.

Ethiopians believe that the Ark of the Covenant, containing the tablets of the 10 commandments, are kept at Mount Zion church in the ancient capital of Axum, guarded by a priest sworn never to leave the premises.

Ethiopians have a unique alphabet dating back 2 000 years, rooted in the Gee’ez language which remains the language of the church while Amharic evolved into the people’s language, with a linguistic kinship akin to Latin and English.

Ethiopians keep time in a unique manner, counting the start of the day with one at daybreak (or what would be 7am in Western timekeeping) and ending it with 12 at sundown and then starting with one again. The Coptic calendar is also different. Ethiopia follows the Julian calendar and is marked its second millennium this last year, seven-and-a-half years after the Western calendar.

The only African nation to avoid colonisation, Ethiopia was an inspiration to South Africa’s ruling African National Congress, and the Rastafarians who idolized Ras Teferi, who was later crowned as Haile Selassie.

Other intriguing aspects of Ethiopia’s heritage include it’s Jewish population (now almost entirely transplanted to Israel), its early acceptance of Christianity in 400 AD (before England, for example, became Christian) and  its veneration by the Prophet Mohammad, who exempted it from jihad, leaving Ethiopia an island of Christianity in a sea of Islam.

Ethiopia is even the birthplace of that morning picker-upper the world cannot do without, coffee, whose name derives from Kefa, the region where it was first discovered, according to legend, by a goatherd named Kaldi.

The ancient capital Axum, with its towering obelisks and royal tombs anchors one of the three legs of Ethiopia’s northern “historic route.” After invading and occupying Ethiopia from 1935 to 1941, fascist leader Benito Mussolini broke one of the obelisks into three pieces and shipped it to Italy. It was returned to Ethiopia recently after decades of lobbying by the Ethiopian government.

The castles of Gonder are the second stop of the historic tour. Gonder was Ethiopia’s capital from 1635 to 1855 and is home to castles built by Emperor Fasilidas, a network of stone structures featuring sauna baths and lion cages.

The final and arguably most stunning example of Ethiopia’s former glory is Lalibela, a mountain village in the highlands of Wello Province that pays homage to a sophisticated civilisation that saw itself as the embodiment of a new holy land.

King Lalibela, who had supposedly visited the holy land before he embarked on his building project, wanted to create a new Jerusalem. The stream flowing between the churches is named the River Jordan and the adjoining hill is known locally as Mount of Olives.

Heading north from Addis Ababa, the capital, the first thing visitors see from the air as they approach the historic village is Lalibela’s most famous icon, the House of St George, the cross-shaped church.

On a towering plateau formed by molten volcanic rock, St. George squats, carved into the rock as if by a giant hand wielding a laser-like surgical tool. It is in the shape of a cross, cut into the rock in a 12-by-12-metre trench, and is formed out of a single seamless rock.

The engineering marvel of churches’ design remains a mystery to this day. The precision, sophistication and astounding scale of the building have defied easy explanation by archeologists and historians. Ethiopian legend has it they were built in 24 years with the help of angels. Modern historians believe the churches took about 100 years to build.

Lalibela has remained a living monument, to this day used as a place of worship by thousands of pilgrims who arrive from near and far.

The Lalibela churches are among the World Heritage List, a selection of manmade and natural attractions judged by the United Nations Educational, Scientific and Cultural Organization (Unesco) to be of such universal value that they ”should be preserved for all time.”

The Lalibela churches are, according to Unesco “a remarkable coupling of engineering and architecture and a unique artistic achievement.”

It has astounded every visitor who came upon them, including Portuguese priest Francisco Alvares, the first European to visit Lalibela, in 1512.

“I weary of writing more about these buildings,” he wrote. “Because it seems to me that I shall not be believed if I write more.”

Several airlines, including Ethiopian Airlines, fly to Addis Ababa regularly from destinations around the world. There are daily flights from Addis Ababa to Lalibela. Flights on a fleet of turboprops from Addis Ababa-Gonder-Lalibela-Axum “historic route” costs US$400.

Trips to Lalibela are best during the colorful festivals of Timkat (Epiphany, January 19) or Meskel Finding of the True Cross, September 27). However, flights and accommodation tend to be fully booked so planning ahead is essential during for visits during those events.