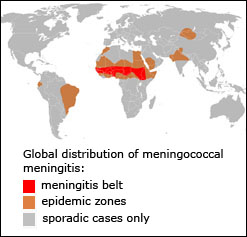 A new mass vaccination campaign to be rolled out across West Africa this year promises to eliminate the deadly brain disease meningitis in Africa, according to the UN World Health Organisation (WHO).

Twenty-five-million doses of the new meningococcal A, or MenA, vaccine are currently in production in India. The drug is expected to be introduced in Burkina Faso in late 2009.

“This is the beginning of the end of the disease,” said Marc LaForce, the director of the Meningitis Vaccine Project (MVP). The project, an initiative of WHO and the non-profit Programme for Appropriate Technology in Health, has been developing the vaccine since 2003.

The vaccine currently used in the region spanning from Senegal to Ethiopia – called the “meningitis belt” for its vulnerability to deadly outbreaks – offers at most two years of protection, according to MVP.

In developed countries bacterial meningitis – known as meningococcal meningitis – occurs in only about three people per 100 000 each year. The meningitis belt by contrast has an annual rate of some 500 cases per 100 000, usually in the dry season.

While the disease is more deadly in the meningitis belt than anywhere else in the world, there have been no prevention vaccines for the strain found in Africa – until now, following clinical trials with MenA.

Recent studies with patients age one to 29 in India, Mali, Senegal and The Gambia have shown that the new vaccine will provide long-term protection. Lead researcher LaForce has said the drug “will allow the elimination of the meningococcal epidemics that have afflicted the continent for more than 100 years”.

Months away from the vaccine’s US$29-million (R288-million) donor-financed debut in three countries – Burkina Faso, Mali and Niger – LaForce said the disease cannot be wiped out overnight.

“Look at polio and how long it took to eliminate that. We are looking at 10 years at least.”

LaForce said the MenA vaccination campaign’s goal is to reach “herd immunity”, in which if at least 70% of the population is immunised, then the entire population is protected.

When asked if people who might refuse vaccinations could thwart herd immunity, LaForce said the response has been “tremendous” in clinical trials to the vaccine. “Seventy percent coverage will not be hard to reach,” he said.

He added that “a single case of meningitis can drive a family into a spiral of poverty from which they may never recover.”

Even with antibiotic treatment, at least 10% of people stricken with meningitis die and 20% percent are left with permanent disability, including mental retardation or deafness, according to WHO. In severe cases of meningococcal meningitis the symptomatic rash can progress to gangrene, requiring the amputation of limbs.

WHO has more than 9 500 cases thus far in 2009, including an outbreak in a camp for displaced persons in Darfur, Sudan, where aid workers have recently been ordered to leave.

The organisation aims to immunise 250 million people in the meningitis belt by 2015. The Global Alliance for Vaccine and Immunization has agreed to create an emergency stockpile of the MenA vaccine starting in 2011 with an initial investment of $55-million (R454-million).

WHO has pledged to fast-track approval of the vaccine as soon as it is licensed in India, according to the director of WHO’s Initiative for Vaccine Research, Marie-Paule Kieny. Kieny said the vaccine is scheduled to become a routine childhood immunisation by 2012.

LaForce said the challenge in developing MenA has been in part financial. “These are the poorest areas in the world. Large pharmaceuticals were not interested in producing a specific product for Africa.”

The Bill and Melinda Gates Foundation has funded MVP’s creation, research and development since 2001.