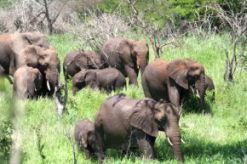 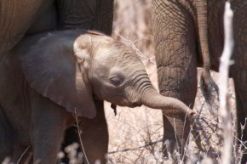 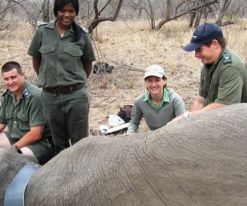 The capture team places a collar on a sedated elephant.
(Image: Amarula)

There must be few people in the world who do not feel humbled and somewhat overwhelmed by elephants, the gentle giants of the wild.

The second World Elephant Day, celebrated on 12 August, is a time to stop for a moment and consider the future of these wonderful creatures. The event is supported by the Thailand-based Elephant Reintroduction Foundation, which aims to offer an alternative future for domestic elephants and a refuge in the forest, where they can live out their days away from humans.

“World Elephant Day has been created to bring the world together to help elephants. It is a day to honour elephants, to spread awareness about the critical threats they are facing, and to support positive solutions that will help to ensure their survival,” says the World Elephant Day website.

It is estimated that 100 African elephants (Loxodonta Africana) are killed every day by poachers on the hunt for their ivory, meat and body parts. This is having devastating effects on their numbers – in 1980, there were over a million elephants in Africa; today there are less than 400 000.

In Asia, elephants range across 14 countries, but they are now considered endangered, with less than 40 000 remaining. Their habitat has been ravaged by human encroachment, but they are also hunted for their ivory and body parts, and used for illegal logging. In addition, they are trained and traded for use in tourist parks and circuses.

The hunting of bull elephants, which have bigger tusks, has meant that there are now fewer males than there are females. Elephant groups are led by matriarchs, usually the oldest female in the group, and consist of the other females, calves and adolescents, with male elephants usually forming their own groups. Because of her age, the matriarch draws on her experience in making decisions for the herd, essential for their survival. When adults are killed, severe damage is done to the close-knit herds, leading to increased orphan baby elephants.

The growing demand for ivory made 2011 and 2012 the worst years on record for elephant poaching in Africa. So far 2013 has seen poaching numbers rising.

In Asia the elephant is looked upon with reverence and spirituality in many cultures. In Thailand the animal is a national icon – it has a designated national holiday, and can receive a royal title from the king.

Elephants are extraordinary animals – besides their longevity and social cohesion, they have the largest brain of any land animal, sharing qualities like sociability, empathy, caring and sensitivity, with humans.

“Elephants are a keystone species,” indicates the website. “It means they create and maintain the ecosystems in which they live and make it possible for a myriad plant and animal species to live in those environments as well.”

This means that the loss of elephants has a rebound effect on many other species that live in these ecosystems. “To lose the elephant is to lose an environmental caretaker and an animal from which we have much to learn.”

Everyone is encouraged to celebrate World Elephant Day by organising events and outreach initiatives to enhance elephant conservation.

One such initiative is the Amarula Elephant Research Programme (AERP), established in July 2002 under the direction of Prof Rob Slotow of KwaZulu-Natal University. The programme conducts research and tracking of elephant movement rates and ranging behaviour.

Amarula is a creamy liqueur, a South African product created from the marula fruit, said to be an all-time favourite of African elephants. The elephant appears on Amarula bottles as the product’s icon. It is South Africa’s most widely distributed alcoholic drink, being sold in 103 countries worldwide.

The project has revealed intriguing results. The only threat in the wild to elephants is lions. An adult male lion is capable of killing an elephant calf, but female lions will only be successful when hunting elephants in a group. In an experiment in Kenya, recordings of one versus three lions roaring, of both male and female lions, were played to herds of lions.

The elephants reacted more strongly to hearing several lions roaring, bunching more tightly around their calves when hearing more than one lion roar, or the roar of a male lion. The researchers observed the matriarch listening intensely to ascertain the extent of the possible threat. In some cases the matriarch approached the source of the roar, displaying aggressive behaviour.

“It was also found that matriarchs in the oldest age class (those 60 years and older) exhibited greater attentiveness and defensive bunching to the threat of male lions than matriarchs of 59 years and younger.”

The programme conducts research by fitting elephants with collars, which record their movements at 30-minute intervals. The findings have aided researchers in understanding elephant feeding behaviour, and patterns and distances the elephants travel. Some of the findings have surprised the researchers – a group of elephants disappeared for a few days, and re-appeared several hundred kilometres away, suggesting that long-established elephant trails had not been forgotten.

Research has helped understand how elephants respond to barriers like fencing, and what elephants do when the fencing is removed. The research has also revealed that elephants are fussy about what trees they choose to browse, and, quite remarkably, that male and female elephants feed differently.

Collaring elephants is a difficult and risky undertaking. The animals are darted by a vet from the air, then tracked by rangers on the ground. Once the collars have been put around the elephant’s neck, and the signal has been activated, the elephant, usually a female, is then roused, and a little shakily, sent on her way to join the herd again.

The programme is now recognised as a global authority on African elephant behaviour.

The trust has expanded its involvement in elephant conservation with a grant to the Centre for African Conservation Ecology at the Nelson Mandela Metropolitan University in Port Elizabeth in the Eastern Cape. The trust donated R55 000 ($5 600) to fund a research and training programme to look into elephant ecology and biology, focused on elephants in the nearby Addo Elephant National Park.

Researchers are assessing the herbivore densities in dung; the impact of elephants on the landscape, and their role in soil erosion; general elephant behaviour in the park; and how to identify individual elephants. Findings will guide and improve elephant management in the park.

The university maintains an extensive photographic and life history database of every elephant in the park. It dates back to the 1930s, making it the longest record of elephant behavioural history in the world.

“The core of our conservation efforts is directed towards promoting elephant management in a way that enhances their well-being while protecting their indigenous habitat,” said Lorien Kee, spokesperson for the trust.

Amarula’s corporate social investment programme extends to a job creation project in the Western Cape, which employs women to make the gold-braided tassles that are placed around the neck of every Amarula bottle. Some 85 formerly unemployed women now earn an income, allowing them to support extended families of up to 300 people.

In the marula growing areas in Limpopo up to 60 000 people are involved in picking the fruits in the season. And the trust does more.

“In the Phalaborwa region, where the Amarula production plant is situated, we are involved in a number of social investment projects, such as building a crèche in Bushbuck Ridge Edinburgh for the local population. Plans are being considered to enlarge the crèche as well as to build another one closer to the Amarula production facility,” said Werner Swanepoel, group marketing manager of Amarula.

Efforts have extended further into Africa. Amarula has been involved with the Kenya Wildlife Service since 2006, where it has improved facilities at the service’s headquarters.

Funding for the Amarula Trust comes from royalties from the Amarula global headquarters at Distell in Stellenbosch, as well as income generated from regional and global budgets.