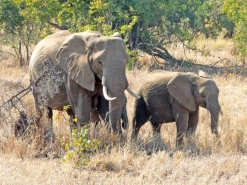 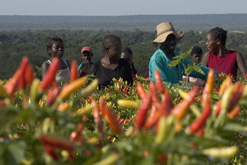 Farmers now have a humane method
of repelling elephants and other large
animals, and can generate extra income
from selling their chillies.
(Image: Elephant Pepper)

African farmers face a host of challenges on an often unforgiving continent, with elephants and other large land mammals foraging in their fields and trampling crops a great threat to productivity.

The Elephant Pepper Development Trust (EPDT) uses chilli peppers to humanely keep elephants out of farmers’ lands, as the animals find the peppers extremely unpalatable. The chillies themselves are put to good use in a range of award-winning sauces and spices, which help to support the work of the trust and boost the income of small-scale African producers.

Established in 1997, the EPDT is a non-profit educational organisation that aims to resolve conflict between humans and animals in rural Africa, using a variety of strategies including research, education and safe, low-cost animal control methods. The organisation was launched in Zimbabwe but is now located beside the Victoria Falls in Livingstone, Zambia, working with farmers in the Zambezi River Valley.

According to the EPDT, only 20% of the elephant range is formally protected in Africa and with the expansion of agricultural lands, farmers and these animals are increasingly competing for space. Conservation efforts have also resulted in growing elephant populations, exacerbating the problem.

The EPDT says elephants are capable of wreaking havoc on farmland and in some communities the beasts have even contributed to malnutrition because of their repeated raids on essential crops such as maize, millet and sorghum, as well as storage facilities.

On the other hand, farmlands often encroach on elephants’ habitats, resulting in fierce competition for water, wild fruit and other resources. Successfully managing both elephants and farms in the same area therefore presents a significant challenge, and resolving the conflict, according to the EPDT, is one of the most pressing wildlife management issues in Africa.

The EPDT takes a two-pronged approach – it encourages farmers to grow chillies as a barrier on their farmlands to repel the elephants. At the same time, these farmers can earn revenue through the sale of their produce and associated sauces, spices and relishes which the EPDT markets through its commercial division, the Chilli Pepper Company.

The EPDT operates on fair-trade principles, paying above-market prices for chillies to its commercial farms and small-scale growers, and ethical living wages to farm workers. Employees also get health benefits, training and access to opportunities for development and subsidised staple food items.

Some 10% of proceeds from sales is ploughed back into the trust to buy seedlings and train more farmers and game wardens from all over the world in chilli deterrent techniques. To date, the EPDT has held training courses across Africa, from Botswana and Mozambique to the Democratic Republic of Congo and Kenya, as well as areas of Asia where elephants are prevalent, including the Lao People’s Democratic Republic, India, Vietnam and Thailand.

After completing his doctorate, Osborn went to Africa with the intention of conserving elephants, but came across an equally important problem when he arrived, that of human-elephant conflict.

The zoologist, who is a member of the Mcllhenny family of Tabasco Sauce fame, knew that extract of chilli deters bears in the US, so he immediately thought of using chillies to protect African farmers’ crops.

Further experimentation in the field proved that elephants are sensitive to chillies’ fiery ingredient capsaicin, and so the Elephant Pepper Development Trust was born.

Subsistence farmers are unable to afford high-tech solutions such as electric fencing or equipment for spraying chilli extract on their crops, so Osborn’s saucy solution had to fall within their means. Preventive measures include planting chilli bushes en masse, ropes hung with cow bells and rags dipped in engine grease mixed with crushed chillies, and burning briquettes made of animal dung and crushed chillies to create pungent smoke that drives away the elephants.

To encourage farmers to spend their time and hard-earned money growing chillies, Osborn and Gravina promoted the idea as a business venture with the potential to generate an extra income for the producers. Chillies are now grown in the Southern African as a high-value cash crop.

“Our hope is that Elephant Pepper sauces will raise awareness about the production of high-quality chillies in Africa and build a strong export crop for the struggling economies of Southern Africa’s developing countries,” says Osborn.

Consumers not only have a mouth-watering choice of four different flavoured sauces and spices, but can also buy a range of Elephant Pepper-branded gear, including shopping bags, t-shirts, mugs, hats and mouse pads.

The initiative has been acknowledged by the World Bank, winning a prize of R842 756 ($108 000) in its Development Marketplace competition in 2003. In 2005 the EPDT was named as a finalist in the inaugural World Challenge global competition for social entrepreneurs, sponsored by the BBC and Shell. In 2007 Phytotrade Africa, which recognises achievement in fair trade and environmentally sustainable natural products in Southern Africa, honoured the Elephant Pepper Baobab Gold spice grinder with an award for innovation.