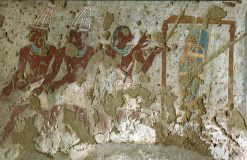 One of five antique paintings Egypt has
retained from France’s Louvre Museum. 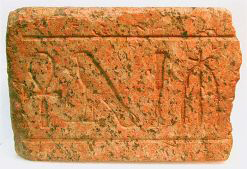 The red granite piece of a naos, which
New York’s Metropolitan Museum of Art
returned to Egypt in October.

The bust of Queen Nefertiti that Egypt is
seeking to repatriate from the Aegyptisches
Museum und Papyrussammlung in Berlin.
(Images: Dr Hawass’s website)

Egypt, Africa’s archaeology hub, has achieved yet another success in its bid to repatriate its ancient artifacts kept in museums across the world.

The northeast African country has retained five antique paintings from France, Egypt’s chief archaeologist Zahi Hawass announced on 22 December. The 3 200-year-old wall paintings had been on display at the Louvre Museum in Paris.

The paintings are part of the tomb of Tetiky, an ancient nobleman, located on the west bank of Luxor in an area called Dra Abu el Naga. They were allegedly stolen from the site in the 1980s and were acquired by the Louvre Museum in 2000 and 2003.

“I am pleased that the five paintings from the tomb of Tetiky have been returned to Egypt,” Hawass said in a statement. “They were well protected.”

The paintings had caused a feud between Cairo and the Louvre, which continues to show artifacts from ancient Egyptian civilisations in its wide-ranging collection. Egypt’s Supreme Council of Antiquities (SCA) suspended the Louvre’s excavations in Saqqara, southern Cairo, earlier this year to pressure the museum to return the artifacts.

“However, because of the return of these artifacts, the Louvre expedition at Saqqara will be allowed to resume,” said Hawass.

The SCA learnt in January 2009 from archaeologists attached to Germany’s Heidelberg University that the stolen paintings were at the Louvre.

French President Nicolas Sarkozy officially handed them to his Egyptian counterpart Hosni Mubarak in a ceremony in Paris.

“It was very interesting that when our President Hosni Mubarak visited Paris last week, President Nicolas Sarkozy of France placed one of the paintings in the hall for President Mubarak when he arrived, so that he could symbolically receive it,” Hawass said. “This gesture shows that France is willing to return stolen artifacts to Egypt.”

The gesture also sent a diplomatic message to other nations to return Egypt’s stolen treasures. “I believe returning these artifacts to Egypt is a good example to show that any museum that buys stolen artifacts will have an immediate reaction against them,” said Hawass.

“I think this story is a lesson to museums all over the world not to buy stolen artifacts.”

The SCA was considering re-installing the five paintings into Tetiky’s tomb, but that may not be possible. “I think it would be very difficult to put them back in the tomb, because it was severely damaged when thieves stole the artifacts.”

Tetiky was a nobleman of the 18th dynasty whose tomb included beautiful wall paintings depicting his journey into the afterlife, Hawass said. The tomb was first recorded in the Journal of Egyptian Archaeology in 1925.

Egypt is recovering its artifacts

Hawass is leading Egypt’s drive to retrieve the country’s antiques that were taken from it in unsavoury fashion. He has reportedly recovered 5 000 artifacts since he was appointed as SCA head in 2002.

Egypt parted ways with thousands of its antiquities during the colonial period. The treasured artifacts were taken either by archaeologists or adventurers and even thieves.

The SCA welcomed the return of a piece of the 12th dynasty King Amenemhat’s red granite naos in October from the Metropolitan Museum of Art in New York. The museum had bought the piece from a collector in the United States with the sole aim of returning it to its country of origin, a move Hawass described as a “great deed”.

But the battle continues to ensure that most of Egypt’s earlier art, which tells of the country’s civilisation, is brought back home.

Topping the list for the SCA is the 3 300-year-old limestone bust of Queen Nefertiti, which is kept at Aegyptisches Museum und Papyrussammlung, a museum in Berlin. Hawass held a meeting last Sunday with Dr Friederike Seyfried, director of the museum, to discuss the return of the sculpture depicting the head, shoulders and chest of Nefertiti.

The meeting confirmed that the bust was taken away from Egypt with the use of fraudulent documents. Hawass is now set to make a formal request to relevant German officials, Dr Hermann Parzinger, president of the Prussian Cultural Heritage Foundation, and Dr Bernd Neumann, Minister of State for Culture, for the return of the statue.

The bust was created during Nefertiti’s life, c1370 – 1330 BC, and was discovered by German archaeologist Ludwig Borchardt in 1912. Nefertiti was the wife of Pharaoh Akhenaten.

Hawass is also campaigning for the return of a statue of Hemiunu, the nephew of Pharaoh Khufu, from Germany’s Roemer-Pelizaeu museum. Germany has had Egyptian artifacts in Berlin since 1828.

From the US he has requested the return of the bust of Achhaf, the builder of the Pyramid of Chephren, one of three Giza Pyramids, from the Museum of Fine Arts in Boston.