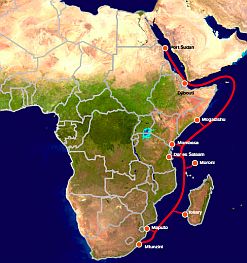 The Eassy cable has connection points along
the Indian Ocean and the Red Sea. 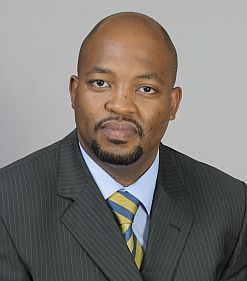 Construction of ’s largest undersea fibre-optic broadband cable, the East African Submarine Cable System (Eassy), has been completed – paving the way for improved internet connectivity between the continent and the rest of the world.

The West Indian Ocean Cable Company (WIOCC), the leading partner in the project, has announced that the installation of the Eassy cable was completed on 19 April along the coast of , .

This marked the conclusion of the installation phase of the project, which began in , in December 2009. The cable was laid by the Ile de Batz vessel.

The next step is to test Eassy before introducing it to the market in July, said WIOCC’s CEO Chris Wood in a statement.

“Now that this critical stage of the project has been completed successfully and ahead of time, we will start system testing almost immediately. Once this is finalised, we are looking forward to connecting our first customers to the network from July 2010.”

Eassy now runs along the Indian Ocean floor to the Red Sea, from the coast of Mtunzini in ’s province to the major shipping zone of Port Sudan.

The 10 000km-long high-capacity cable will significantly boost broadband connectivity and the general telecommunications industry in 21 sub-Saharan countries, connecting those states with each other and elsewhere around the globe.

Eassy’s landing stations in Mtunzini, , , Toliary in , in the , , in and offer greater connectivity than any other cable in the region, which includes Seacom.

Eassy will have the capacity to transmit 1.4 Terabytes (Tb) per second, compared to the 600m-long Seacom, which offers bandwidth at the speed of 1.28Tb per second.

Countries in East, Central and in particular will have access to faster and affordable broadband once Eassy is active. The cable will link with numerous other international undersea cable networks, creating a “diverse [and] seamless” connectivity to Europe, the Middle East, the and .

“For international carriers, it offers a reliable, high-capacity route into parts of that have previously been seen as difficult-to-reach locations. In both cases it does so with a degree of commercial flexibility that has until now been completely unattainable.”

Eassy will be the first undersea cable system to directly connect Africa’s east coast nations to . This gives it an edge when compared to existing systems, which are routed via and the , according to Ryan Sher, chairperson of Eassy’s technical working group.

“… Other east coast systems use longer routes via the Middle East or ; our optimised routing means that we are able to offer the lowest latency service to our customers,” Sher said.

“Eassy will … minimise the time taken for traffic from Africa to reach the key internet peering points in Europe and , and vice versa,” he added.

The majority of international traffic is internet-based, and most of Africa’s internet traffic is destined for Europe and the “where the most popular content and applications are located”, Sher said. “Our ability to deliver content faster gives us and our customers a competitive edge in the market.”

Reaching out to landlocked countries

“At WIOCC we are also working with our shareholders to deliver high-speed, fibre-optic connectivity not just to the Eassy landing stations, but deep into the interior of ,” said Wood. This will enable us to satisfy the growing customer demand for end-to-end service and provide improved geographic reach.”

As the largest shareholder with a 29% stake, WIOCC was set up specifically to drive investment in the Eassy cable system. The consortium’s headquarters are in ’s capital city of .

It was initially owned by 12 African telecommunications companies, until ’s TelOne and the Libyan Post, Telecom and Information Technology Company bought in recently.

All WIOCC’s sub-Saharan stakeholders will play a key role in rolling out the fibre-optic networks, generated from Eassy, in their respective countries.

African telecom operators own more than 92% of the Eassy project, with the remaining shares taken up by international ventures, such as France Telecom, ’s Saudi Telecom Company, Bharti Airtel and the Communications Global Networks Services.