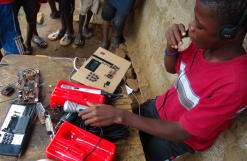 At just 12, Kelvin Doe built himself batteries and a generator using parts found on dump sites, and started a pirate FM radio station.

Born in Freetown, the capital of the small West African nation of Sierra Leone, Doe comes from a disadvantaged community; here, electricity supplies are haphazard, prompting him to turn to a generator. He has no formal schooling in electronics or engineering, but is a self-taught inventor.

Doe, who is also known as DJ Focus, sourced the materials for his inventions in local rubbish bins and dump sites.

“This was a microphone wire, converted to a power output,” he says, pointing out a component from his radio station. “I got it from the dust bin.”

Doe’s enterprise received good exposure at the inaugural Innovate Salone, a nationwide innovation contest in Sierra Leone which is sponsored by the non-profit Global Minimum organisation to scout for excellence among the country’s high school students. Doe and his team from Albert Academy were among the eight winners.

He also attracted the attention of a doctoral student at the Massachusetts Institution of Technology’s (MIT) Media Lab, David Sengeh.

Sengeh, from Bo, also in Sierra Leone, is one of the founders of Global Minimum.

With assistance and guidance from Sengeh, DJ Focus carved himself a bigger niche as General Focus, a promotion he gave himself for his management of the radio station.

He found himself on his way to New York to present his ideas and innovations at the 2012 World Maker Faire, held in that city in September. Here he sat on a “Meet the Young Makers” panel alongside four American inventors and was later given a tour of Harvard’s Technology and Entrepreneurship Centre.

According to news agency CNN, General Focus made history as the youngest person ever to participate in the Visiting Practitioners Program at MIT.

“Kelvin represents learning by making,” says Sengeh, who speaks of his respect for the teen. “He takes a part, looks at it and tries to reverse engineer it.”

Reverse engineering is Doe’s master and his mind is the apprentice. Using soda, acid and metal, bound together with tape – all items found from surrounding trash – he made his battery. Doe adds that the generator wasformed from a damaged voltage stabiliser, motor, plug and other components which he found while searching the trash. He also found the antenna that allows his audience to listen in to his radio station.

The generator lights his home, powers his radio station, and allows neighbours to charge their mobile devices.

More impressive, before his Maker Faire trip Doe had never been more than 15 kilometres from his home. He never received any recycling qualification, nor was he inspired by green advocates to reuse obsolete electronics.

Now he is not only an inventor, but an employer as well – he gives job opportunities to local youngsters, paying them 5 000 leones (US$1.2) for making themselves useful as presenters or reporters at his handmade, unregistered radio station. In his spare time Doe takes to the boards as a DJ as children’s birthday parties, for a small fee.

Using knowledge to help his community

Doe was invited to be a resident specialist at the International Development Initiative at MIT for three weeks, as well as to be a visiting presenter at the Harvard School of Engineering, where he pledges to use all his newly attained knowledge to enhance his society.

His international acclaim is growing, and a video made by @radical.media for its THNKR YouTube channel has already clocked up over three-million hits.

Not only is he inspiring his community, but Doe seems to be intent on proving that there is great potential in Africa.

“My next invention will be a windmill, for people to use for electricity supply,” he explains.“That is my aim – to promote innovation in Sierra Leone, among young people.”