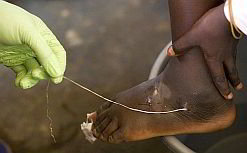 The 3 000-year-old Guinea worm disease
has been eradicated in Ghana after a
23-year battle by the Carter Centre and
the Ghanaian authorities.
(Image: Wikipedia) 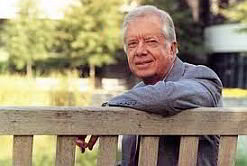 Former US president Jimmy Carter
is the founder of the Carter Centre,
which started its fight against the
disease in 1986.
(Image: The Carter Centre)

Ghana’s vice-president John Mahama broke the news on 28 July 2011 at a celebration of the country’s disease-fighting efforts. The event was held in Tamale city in the north of the country.

The war against Guinea worm disease was initiated by the Carter Centre in 1986 after its founder, former US president Jimmy Carter, witnessed how people in the country were being affected by the debilitating parasite.

The Carter Centre works across the world to promote human rights and the alleviation of human suffering, while also improving access to healthcare.

When he started the programme, Carter predicted it would take 10 years to eradicate the disease – in the end it took 23 years.

“Ghana’s triumph over Guinea worm disease serves as a reminder to the world and the remaining endemic countries that the greatest challenges can be overcome with hard work, political commitment, and the support of the international community,” the centre said in a recent statement.

Going for 14 months without a new case of the disease emerging meant the cycle had been broken.

Dr Donald Hopkins, vice-president of health at the Carter Centre, said at the celebrations: “The last cases of any disease are the most challenging to wipe out.” This is after a new outbreak of the disease was reported, with more than 1 000 new cases in 2005 when the country already had a couple of hundred people infected.”

If this is achieved, dracunculiasis will be the world’s first parasitic disease to be completely stamped out.

When the disease-fighting campaign began, there were an estimated 3.5-million cases in 20 countries around Africa and Asia – now only 804 cases remain.

Dracunculiasis is contracted by drinking water contaminated by water fleas. The fleas then lay eggs, containing Guinea worm, in a person’s abdominal tissue.

After the eggs hatch the worm establishes itself in its human host, growing to a length of up to one metre in a year. After this, the worm forces its way out of the host through the feet or legs – an extremely painful process that affects a person’s mobility so that he or she is unable to work or go to school.

The disease is mostly found in poor countries with limited access to clean water. If a breadwinner is affected and rendered immobile, the entire family suffers.

While trying to alleviate the burning sensation caused by the emergence of the worm, a person will put his or her feet in a stream. This causes further contamination as the worm releases more larvae into the water.

A single worm can release more than 1-million eggs at a time, which hampers eradication efforts.

Guinea worm disease is not fatal and there is no treatment or vaccine to prevent it.

Google donated US$1.4-million (about R10.5-million) to the Carter Centre to fight the disease.

“This is a fantastic accomplishment that took a lot of hard work by the Carter Centre, the Ministry of Health and their partners. There is no drug to prevent the infection of Guinea worm disease, thus our funds supported health education, as village-based health workers were trained to educate people about the origins of the disease and how to prevent it,” Google said of Ghana’s success.

Ghana is now under a surveillance period to achieve an official World Health Organisation certification of its status.