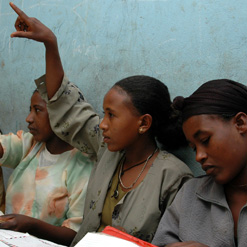 Ethiopian schoolgirl Mulu Melka lifts her
hand in class in Addis Ababa. Her country
has increased its education spend from 8%
of the total budget in 1985 to 23% in 2009.
(Image: Andrew Heavans, Irin)

Many sub-Saharan African countries are off-track to achieve the UN’s Millennium Development Goals, but there have been pockets of success: Ghana is set to become the first country in Africa to halve poverty and hunger before 2015, while primary school enrolment in Ethiopia has increased by more than 500% since 1994, according to the Overseas Development Institute (ODI).

Common to both examples has been the sustained commitment of each government to reform the respective sector, say researchers Jakob Engel and Henri Leturque.

“The story of the past 20 years in Ghana’s agriculture sector has been one of incremental yet sustained change, rather than dramatic development,” states the Ghana report. The country’s government-led economic reforms, including devaluing the currency, liberalising markets, and restructuring the then-inefficient cocoa marketing board, have helped to boost food production by 80% per capita over the past 30 years, and enabled Ghana to become almost self-sufficient in staple crops such as yam and cassava.

But there is more to it: “There is a strong link between widening food availability and dropping malnutrition,” Leturque said, “but it is by no means the only answer – improved health and sanitation, and improved childcare practices, also played a role.” Despite progress in these areas, Ghana is off-track to achieve MDGs 4 and 5, to improve child and maternal health, according to a report by the National Development Planning Commission released on 14 September.

In Ethiopia, the government set out to improve the education sector when it came to power after the civil war, “recognising rural poverty was not only a key driver in conflict and inequality, but was also holding the country back and perpetuating the cycle of poverty… and that ensuring children had access to school was key to these broader development goals,” said Engel.

The government developed education reform plans and gradually upped its education spend from 8% of the total budget in 1985 to 23% in 2009, with donor education aid also rising. The increased funds went towards abolishing school fees, constructing and improving schools, and hiring and training teachers, among other activities.

Key to meeting MDG 2 (achieving universal primary education) was a move in 1991 to devolve power to regions and districts to run their own schools, and shifting the language of instruction to local languages, says the ODI. In 1994, just 3-million pupils in Ethiopia attended primary school; by 2008 15.5-million did so, while secondary school attendance increased fivefold.

Local authorities involved parent-teacher associations in rehabilitating and reviving schools, said Engel. “Lots of the investments made created access to households to send their children to school for the first time – there was a genuine appreciation of that, and people started to realise its relevance in their lives.”

But more needs to be done to ensure progress continues – and is equitably spread in both countries. In Ethiopia, high drop-out rates remain in secondary school, quality teaching is still lacking, and some regions, such as Afar and Somali, are lagging behind on primary school enrolment. To get as-yet-unreached children into school, “will take more than school construction; it will take a focus on non-formal education, addressing maternal and child health, and early childhood development”, said Engel.

Agricultural growth in Ghana has also been inequitably distributed: concentrated in the south to the detriment of the north. “A lot still needs to be done to support the north, where there are fewer resources to work with,” said Leturque.