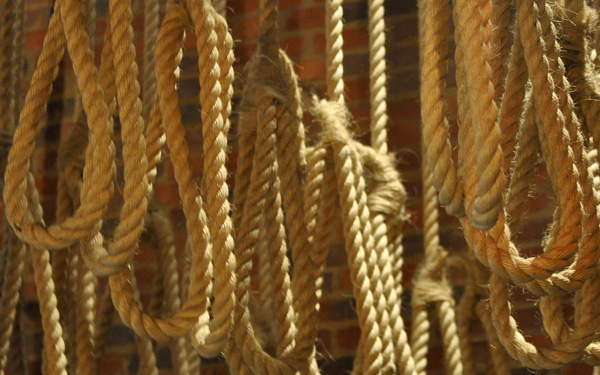 At the Apartheid Museum in Johannesburg, a mass of nooses represent the 131 government opponents hanged by the apartheid government. Globally, hanging remains the most common form of death-penalty execution. (Image: John Karwoski, Flickr)

Amnesty International reported a more than 50% rise in executions in Africa last year compared to 2012, but added that there was progress because only one in 10 African countries still executed people. Netsanet Belay, Amnesty International’s Africa director, said: “Five states executed people last year: Botswana, Nigeria, Somalia, South Sudan and Sudan. Sixty-four people were put to death, an increase of more than half from 2012. This was mainly caused by Somalia, where reported executions jumped from six in 2012 to 34 last year.” In the same year, Saudi Arabia alone executed 79 people, and Iran 369.

According to Amnesty International, more than half of all death sentences were carried out in the semi-autonomous Puntland region of Somalia, often against alleged members of the al-Shabab militant group.

Nigeria was particularly worrying, said Belay, as the country resumed executions for the first time in seven years. “The resumption seems to have been motivated by the deteriorating security situation, although there is no convincing evidence that the death penalty has any particular deterrent effect on crime and violence.”

The vast majority of countries in Africa had moved away from the death penalty, while a small, isolated group continued to cling to state-sanctioned killing, Belay added. “Some governments use the death penalty as a populist tool to prove that they are ‘tough on crime’. It is shocking that politicians play with people’s lives in this way to gain votes.

“Neither is it true that people executed are only those guilty of the most heinous crimes. Last year, people were executed, among other things, for drug offences and alleged links to political opposition groups. People received the death penalty for armed robbery in Kenya, Nigeria and Sudan, even in cases where no-one died.”

Amnesty International reported that Nigeria, Somalia and Sudan accounted for more than 90% of all regional executions last year. Belay said: “It is a great pity that a few countries let the region down. Most African states have abolished the death penalty in law or practice or are on the road to doing so.

“Positive developments in countries across Africa have inspired the global abolitionist movement in recent years. Governments must ensure these hopes are not in vain – the increase in executions in 2013 should not be repeated over this year.”

At the start of the year, the regional court of the Economic Community of West African States ordered the Nigerian government to refrain from further executions, and in March the country’s justice minister confirmed that the government would respect the ruling, according to Amnesty International’s website.

“Some of the most promising developments have been in sub-Saharan Africa,” Belay said. “Of the African Union’s 54 member states, 37 are not applying the death penalty … In Ghana and Sierra Leone, new constitutions are being drafted that offer real opportunities for abolition. Benin and Comoros are both considering new penal codes that would end the death penalty. Guinea-Bissau ratified, and Angola signed, a key United Nations treaty aimed at the abolition of the death penalty.”

Amnesty International publishes an annual review of the death penalty worldwide, and on 27 March, it released its report on death sentences and executions in 2013.

The report stated that the wide use of the death penalty in Iran and Iraq caused a sharp global spike in the number of executions carried out in the year, bucking the global trend towards abolition. Excluding China, where the number of executions is kept secret, 778 executions were known to have been carried out in 2013, compared to 682 in 2012. After China, Iran (369 executions) and Iraq (169) are the biggest executioners, followed by Saudi Arabia (79) and the USA (39).