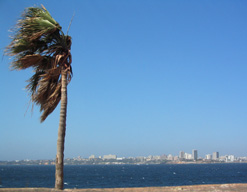 A view of the Dakar skyline from Goree
Island, once the last African stopover for
newly abducted slaves before they were
taken across the Atlantic Ocean to the
Americas. 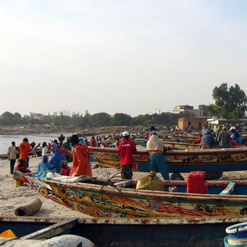 The iconic symbol of Senegal are the
pirogues, the colorful wooden fishing
boats that have plied the Atlantic coast
from time immemorial, providing a
livelihood for generations of
coast-dwelling Senegalese. 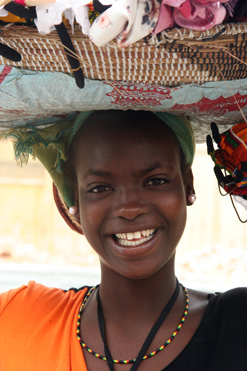 A hawker on the streets of Dakar.
(Images: Wikipedia)

For decades, the Senegalese capital of Dakar has stood out as a vibrant, cosmopolitan centre in West Africa, an intoxicating mix of Africa, Islamic influences and French sophistication.

It’s the birthplace of Negritude, the philosophy of black pride and ideas whose strongest champion was Leopold Sedar Senghor, Senegal’s first president. Senghor, the nation’s philosopher-king for nearly 20 years, gave up power willingly, ensuring a democratic tradition that has made Senegal a model of orderly transition in the continent.

The port city is a place that manages to balance a deep Islamic piety with an African joy de vivre that splashes a dash of magnanimity into the sterner version of the faith practiced further north and east.

Dakar was the place chosen by Thabo Mbeki and the African National Congress in the late 1980s for secret meetings with South African business leaders, a step on the road towards the peaceful negotiated transition from apartheid rule in the early 1990s.

To visit Dakar today is to see a city in a rush. Construction is everywhere, and the city seems to be in constant upheaval as it firmly takes the mantle of de facto capital of Francophone West Africa away from neighboring Abidjan, in Cote D’Ivoire. Since the once mighty Abidjan fell victim to a festering civil war, Dakar has experienced an economic boom – and accompanying inflation – as international organisations flock to the city to relocate their headquarters.

The expatriates who now make Dakar home have added to the vibrancy of the city’s nightlife.

But while the night beckons, the legendary Goree Island is not to be missed for a proper tour of West Africa’s most beguiling and cosmopolitan city. A stroll down the leafy alleyways of the island’s colonial buildings, covered in vibrant bougainvillea, belies Goree’s painful history as the final African stopover in the North Atlantic slave trade.

Although only some thousands of the more than 20-million slaves shipped to the New World passed through Goree, the island and its “room of no return” are testament to the inhumanity of the trade that changed the course of history.

Cafes abound in Dakar, and it’s easy to find exquisite coffee and a decent baguette in any neighborhood.

The city also attracts art from across Africa. The Dak’Art Biennale festival, held every two years in May, turns the whole of Dakar into a gallery, from Isle de Goree to the Galerie National – whose year-round displays are also worth checking out.

Marche’ Sandaga in the city centre is the classic sprawling African market – noisy and colourful, with a cacophony of hooting horns and shouting hawkers.

The beach is where young men draped in loincloths head to practice the ancient Senegalese tradition of wrestling, a national obsession. Major wrestling bouts fill 60 000-seat stadiums and champions are lionised by praise singers and showered with money.

The iconic symbol of Senegal are the pirogues, the colorful wooden fishing boats that have plied the Atlantic coast from time immemorial, providing a livelihood for generations of coast-dwelling Senegalese. The best time to catch the beehive of activity is when the pirogues return from their day’s labour at around 6pm at Soumbedioune Beach. An array of fish is on display, as you rub shoulders with housewives bargaining for the evening’s dinner.

November to February is the cool and dry season in Dakar, and the best time to visit. From the June to October rainy season the city turns and hot and humid. Senegal’s currency is the CFA franc used across Francophone Africa. The US dollar is still accepted as foreign currency, but with its current weakness the euro is preferable. Subject to fluctuations, $1 is about 700 CFA.

No visa is required for South Africans, Europeans and North Americans, but is required for Australians and New Zealanders. Malaria precautions are essential, especially if you are planning to travel outside Dakar. A yellow fever certificate must be supplied if you are travelling from endemic areas.

Security is not a major issue in Dakar. But you’re likely to be approached by scam artists who will regale you with a long and genuine-sounding story. At the end, they’ll offer you a small gift, such as a shiny necklace, and ask for something in return. Politely say no and walk away.