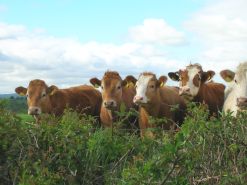 An innovative Nigerian project that processes abattoir water and converts the collected organic waste into fertiliser and methane, has won the 2009 Intel Environment prize at the annual Tech Awards in the US.

The Tech Awards, held this year in San Jose, California, in November, honoured creativity and inventiveness across a range of fields, including the environment, education, science, health and more.

The project, titled Cows to Kilowatts, was founded by civil engineer Dr Joseph Adelgan. In developing countries especially, abattoir waste is a major source of water pollution and greenhouse gas production. Through the processing of organic waste, the project helps mitigate one of the biggest threats to the future of the planet, as well as promote the use and benefits of renewable energy.

Adelgan is the founder of the Global Network for Environment and Economic Development Research (Gneeder), an NGO that that works in poor urban communities to improve quality of life, reduce air pollution and create cheap sources of domestic energy.

Projects are based in Nigeria and Ghana at the moment, but there are plans to roll them out in other sub-Saharan countries.

In Nigeria regulation of abattoir waste is lax, and there are few facilities for water treatment. In Ibadan, the country’s second biggest city, waste from the Bodija Municipal Abattoir used to run out into open drains. These are connected to surface water sources, which resulted in severe contamination of groundwater with pathogens such as salmonella, Escherichia coli, and the deadly Rift Valley fever virus.

The waste water from this abattoir has an extremely high biochemical oxygen demand, which is an indicator of organic pollution. Communities living in the area had no choice but to use the contaminated water, so the situation was desperate.

Cows to Kilowatts started off as a collaborative project between Gneeder, the Centre for Youth, Family and the Law, and the Sustainable Ibadan project. The initial goal was merely to treat the abattoir waste in an effluent plant, rendering it less harmful to communities and the environment and preventing groundwater pollution.

However, the team soon came across a related problem – the decomposing organic waste that was releasing carbon dioxide and methane into the atmosphere. Both are greenhouse gases, but methane is 23 times more lethal in bringing about climate change than carbon dioxide.

A new strategy using biogas technology was introduced. Applicable on both large and small scales, the process uses reactors to digest organic waste and convert it into low-cost energy.

The three founding organisations joined up with scientists at the Biogas Technology Research Centre at Thailand’s King Mongkut University of Technology Thonburi, and with funding from the UN Development Programme in Nigeria, they designed and built a pilot biogas plant in Ibadan. This uses an anaerobic fixed film digester to break down the waste. The resulting sludge is turned into high-quality organic fertiliser, and methane and carbon dioxide are collected before they can dissipate into the atmosphere and cause harm.

The plant supplies around 5 400 cylinders of biogas per month, which is used for cooking, electricity generation, and to power vehicles – at just 25% of the cost of liquefied natural gas. Furthermore, the organic fertiliser is sold to farmers at a fraction of the cost of chemical fertiliser.

Poor families often have to rely on kerosene, paraffin and wood for heating, cooking and light, which pollute the air in the home. By using biogas they not only improve their living conditions, but also help curb deforestation, as the demand for wood drops.

Established in 2001, the Tech Awards came about as a result of the State of the Future report, a publication of the Millennium Project of the American Council of the United Nations University. The report stated that acknowledgement of innovation through awards is a valuable tool for stimulating scientific and technological breakthroughs to improve people’s quality of life.

The Tech Awards programme pays tribute to technology that enables people to live a better life. It honours 15 enterprising projects in five categories: health, education, equality, the environment, and economic development. There are three winners in each category, and the top five laureates walk away with US$50 000 (R378 717) each.

Laureates are then inducted into the Tech Awards Network, which provides opportunities for learning, networking and collaboration.