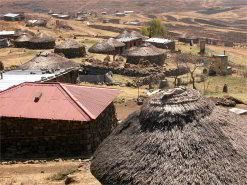 Cordex will help a village like Ha Tsiu in
Lesotho to know how climate change might
affect the rainfall over their area.
(Image: Jaspreet Kindra, Irin News)

Information about how climate change may affect any city, town or village in Africa until the next century will be available by mid-2012 as scientists localise global climate data.

The Coordinated Regional Climate Downscaling Experiment (Cordex), an initiative of the World Meteorological Organisation, is now able to render the data from regional climate models to the scale people live in, and decision makers work at.

The information will help not only countries but also communities in their efforts to adapt to changing weather patterns, and to tailor their disaster risk reduction plans.

The effort is geared to feed into the next assessment report of the Intergovernmental Panel on Climate Change (IPCC), due to be released in 2014.

Although Cordex aims to scale down the data for all regions of the world, Africa has been identified as the most vulnerable by the IPCC and a priority for the initiative.

Historically the continent has been under-researched, but for the next two years will be a focus for the programme.

Chris Lennard, a scientist at the Climate Systems Analysis Group at the University of Cape Town in South Africa, which has one of the only two climate modelling groups downscaling the projections in Africa, said by mid-2012 climate data for people living within 50 km from each other will be available across Africa.

The other African group, also in South Africa, is based at the Council for Scientific and Industrial Research in Pretoria.

“There are climatologists outside the project who are downscaling up to a 22 km resolution as well,” said Lennard.

“Although this means data at the scale of cities will be available, when assessing vulnerabilities to climate change in a place like Johannesburg there are many other factors that need to be considered external to the city, such as water and food security and power provision, for example.”

Projecting the impact of climate change is a complicated process that takes into account changes in the long-term averages of daily weather patterns and many other factors.

Climate models are used to simulate processes that occur in the atmosphere, such as the movement of moisture and heat as well as the possible impact of increasing concentrations of greenhouse gases on these processes.

During two meetings in 2011, over 20 African climate scientists met to analyse Cordex-produced data. They decided to divide Africa into three regions for analysis – Southern, East and West.

They then sub-divided the regions according to the common characteristics of the rainfall patterns in them. For instance, West Africa has been split into a Southern and Northern region because the south has two peaks per rainy season and the north has only one.

Unfortunately, not all African countries can be assessed because of a lack of adequate scientific support and observational data.

During the first stage of Cordex, scientists tested the ability of the various regional climate models to generate data based on actual climate statistics for the period 1988-2010.

“The selected historical timeframe is too small to look at any long-term trends,” said Lennard. “We wanted to see how the regional climate models simulated the past so we can say something about how they might simulate the future.”

The 14 regional climate models also include factors like the level of small-scale convection, and the interaction between the land surface and the atmosphere. The scientists then work on a consensus position based on the results generated by all the models.

“We have completed this stage and are busy writing up our results so they can be included in the IPCC 5th assessment report,” said Lennard.

The teams are now awaiting results of global projections of climate change from 12 global climate modelling groups already at work in Europe, the US and elsewhere.

They have simulated the earth’s climate as far back as 1950 and look as far forward as 2100.

“Once the global climate model data become available we will start downscaling them, and the downscaled results will be shared with the African teams for analysis. We expect to have the first downscaled model data early in November,” Lennard said.

Making sense of the numbers

According to Saleemul Huq, one of the IPCC’s lead authors, “The projections are critical for communities that must adapt to a moodier climate with limited resources. Initial IPCC assessment reports tended to focus on global climate models and predictions that did not factor in underlying socioeconomic conditions or the vulnerability of communities,”

He continues: “So, for example, model-based physical impacts in the Netherlands look similar to those in Bangladesh – in part because the two countries share a similar topography, both being low-lying deltas. In reality the impacts on people, and the options for adapting to these, are likely to differ widely.”

One of the unique characteristics of the Cordex Africa campaign is that African climatologists will meet with other African scientists who study vulnerability, adaptation and the impact of climate change on people, to translate the model numbers into meaningful, usable information.

“These scientists know for example what thresholds, which, if crossed more frequently would impact detrimentally on communities, so whether the people in a certain area are more vulnerable to five days or eight days of continuous rainfall,” said Lennard.

“We are coming together so that the impacts scientists can ask climatologists their questions, who will then analyse the model output with these questions in mind and provide them with information they can use.”