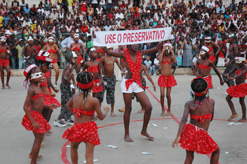 The new hit being sung by everyone in São Tomé and Príncipe goes like this: “Bleguê Bleguê … A mi na mecê Bleguê, anda com bebê …” The lyrics, in São Tomé’s Forro language, have two simple but important messages: when you go out, always take condoms with you, and when you have sex, always use a condom.

The song is being sung by adults and children, and played incessantly on radio stations and in night clubs throughout São Tomé and Príncipe, an archipelago of 150 000 inhabitants in the Gulf of Guinea off the east coast of central Africa.

It all began with a group called Bulauê Linda Estrela, in the quiet village of Messias Alves, a fishing community of some 3 000 people, with old houses and less-than-optimum public services.

The only television set able to receive more than one channel stopped working over two years ago and the internet has yet to reach the village.

“The only thing left to do after you come back from fishing is to drink sugarcane brandy and make babies,” said one young resident.

Three years ago some of the village’s men and women came together to create the Bulauê Linda Estrela cultural group.

“People here go to bed very early, and there’s no centre for entertainment,” said village chief Lauriano Costa, 78. “We created the group to break the monotony.”

Bulauê Linda Estrela did more than that: its song, Blegue Blegue, is helping raise awareness about the importance of using condoms to prevent HIV. The group has not yet released a CD with the song on it, but it is already available on the grey market.

The lyrics were inspired by a real-life incident: one of the band members invited his wife to attend a rehearsal; she turned down the invitation but suggested he take condoms with him in case he happened to have casual sex.

Ludmila Monteiro, an activist with the Médicos do Mundo, a humanitarian aid organisation promoting development, believes the song’s success can partly be attributed to the groundwork done by national campaigns encouraging condom use.

“Talking about condoms is no longer a novelty for São Tomeans,” she said.

There is, of course, a big difference between enjoying the song and understanding its message.

“I like the song a lot,” said Sabina Graça, 25, who admitted she had no idea what the lyrics meant.

“Having sex with a condom reduces your sexual potential,” said Niker Quarsema, 27, a fisherman.

“My husband has two wives, but he won’t have sex with a condom,” said Adezica Beatriz, 38, a member of Bulauê Linda Estrela. “When I talked to him about the need to do so, he nearly hit me.”