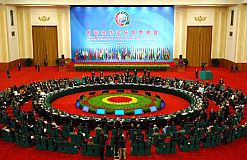 A round table session of Chinese and
African leaders at the 2006 China-Africa
co-operation summit in Beijing. 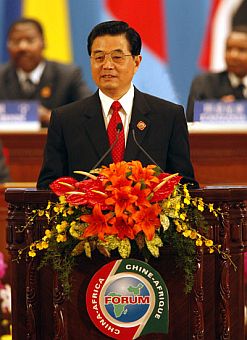 More opportunities for Chinese investment into Africa are to open up soon, with the announcement that China is to bolster its China-Africa Development Fund by an additional R19.8-billion ($2-billion).

The state-run equity fund has already invested in 20 projects, totalling a massive R3.9-billion ($400-million), in Africa since it was established in June 2007. The latest development will give Chinese enterprises added impetus to sink their funds into the continent, particularly in light of the withdrawal of Western investors, many of whom find themselves under financial pressure because of the global recession.

Among the major projects that have opened their doors, thanks to the fund, are the 560 000kW Ghana Power Plant, the first-of-its-kind Ethiopian Hansom International Glass factory, a cotton planting and processing facility in Malawi, the Egyptian Suez Trade Park, and the Lekki Trade Zone in Nigeria.

The China-Africa Development Fund (CADFund) opened its first South African office in Johannesburg on 16 March 2009. This, according to the fund, is a major step for Sino-African co-operation and a positive sign for economic development in Africa.

The fund, which is the first of its kind, was launched after Chinese president Hu Jintao made a pledge in 2006 to deepen Chinese aid to Africa. The president was speaking at the China-Africa Cooperation summit held in Beijing. In his opening speech Hu announced an extensive package of assistance, investment, trade and other key projects.

He also said that China planned to double its assistance to Africa by 2009 – this encompasses an amount of R29.8-million ($3-billion) in preferential loans, R19.9-million ($2-billion) in preferential buyer’s credits to Africa, the establishment of the R49.7-billion ($5-billion) China-Africa Development Fund, and the waiving of debts owed to China by a number of poor African countries.

In 2008 the Industrial and Commercial Bank of China acquired a 20% stake in Standard Bank. The deal, valued at R54-billion ($5.5-billion), is the largest single investment into South Africa, and is also China’s biggest financial investment ever.

China has also invested in the mining, construction and motoring sectors, as well as the electronic goods industry in South Africa, its major trading partner on the continent.

China Development Bank chair Chen Yuan said that the fund would lead to Chinese investment in multiple industries, resulting in a better quality of life for thousands of African people. The China Development Bank has a stake of R9.9-billion ($1-billion) in CADFund, which in fact receives all its capital from the State Council-controlled bank.

This initial capital is fast dwindling and most of it, according to CADFund CEO Chi Jianxin, would be disbursed by the end of 2009. He added that the second round of investments, to the value of R19.9-million ($2-billion), would begin in 2010, and would see China more than halfway to its goal of a R49.7-billion ($5-billion) investment.

CADFund plans to set up offices in more African countries to accelerate the level of mutual co-operation.

The fund’s main areas of interest are agriculture, manufacturing, infrastructure, natural resources exploration and industrial parks – all fields which will further the economic development of African countries on a sustainable basis.

However, CADFund has received some criticism from developed nations because of its apparent support of countries such as Zimbabwe and Sudan, both of which have appalling human rights records, in a bid to gain more access to oil and other precious African resources.

But supporters of the fund’s activities have struck back, saying that the US continues cordial relations with countries like oil-rich Equatorial Guinea, which ranks among the worst human rights abusers on the continent. The US is the largest single foreign investor in Equatorial Guinea and has been accused of turning a blind eye to the suffering of the people in its quest for oil.