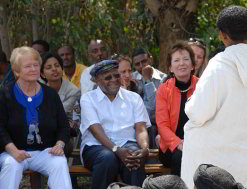 A married woman in the northern Ethiopian
village of Birhan Meske shares her story
with Gro Brundtland, Desmond Tutu and
Mary Robinson.
(Image: The Elders)

Archbishop Emeritus Desmond Tutu has added his voice to a global drive to stop the tradition of offering young girls as brides, a custom which happens around the world but is particularly widespread in developing countries in Africa, Asia and South America.

The phenonemon affects about 10-million girls every year.

The Girls Not Brides partnership: The Global Partnership to End Child Marriage was launched in September at the Clinton Global Initiative annual meeting in New York.

The initiative was announced by Tutu and former Irish president Mary Robinson of independent leadership group The Elders; Luis Ubiñas, president of the humanitarian Ford Foundation; and Jennifer Buffett, president and co-chair of the equality organisation NoVo Foundation.

At the event, the founding members committed themselves to building Girls Not Brides into a fully-fledged organisation with no fewer than 150 members working in at least 20 countries by December 2012.

They also aim to raise US$3-million (almost R24-million) to ensure sustainability of the initiative, establish a secretariat, support activities aimed at ending child marriage in priority countries, and build a worldwide network of reliable programme donors.

Unaware of the scale

Nobel Peace Prize laureate Tutu admitted on The Elders blog that he himself was unaware of the scale of the problem and the impact of it on the lives of young girls, some of whom are are forced into marriage before they’re even old enough to go to school.

Representing The Elders, Tutu, Robinson and former Norwegian prime minister Gro Brundtland visited northern Ethiopia earlier in the year, where they were confronted for the first time with the harsh reality of child brides.

“I thought I had a pretty good idea of the human rights landscape on this precious earth we share,” wrote Tutu. “What I have realised is that these girls are invisible and voiceless, making them some of the most vulnerable people on our planet.”

He said child marriage is not merely a women’s issue but occurs because “we as men allow it”. He called on all men to stop perpetuating the scourge, and help fight to eradicate it.

An outspoken activist for human rights, Tutu holds the rights of children and young people particularly close to his heart. He is a signatory to Save the Children and is a counsellor for One Young World, a platform that helps young leaders to connect with those in power.

He believes that Girls Not Brides has the potential to stop child marriage in one generation if women are given access to education.

“I am confident that change can happen very quickly,” said Tutu. “No woman who has had the benefit of staying at school and marrying later in life can inflict child marriage on her daughters. We can end child marriage in a generation.”

Child marriage has become ingrained in many traditional communities who have been practising it for generations.

It remains largely unchallenged in these communities and is often used as a means to help alleviate poverty within families, according to the Girls Not Brides website. Girl children may also be used as bargaining tools to ensure protection of the family or community from violence.

In the developing world, one in three girls is married before the age of 18, one in seven before she is 15.

More than a third of child brides live in India – where the practice is illegal – while the African country of Niger has the highest rate of girls married before the age of 18 (75%).

Although the rate of child marriages appears to be declining, it is predicted that an additional 100-million girls will fall victim to this practice over the next decade alone.

As girl brides are required to have intercourse and children with their husbands almost immediately, not surprisingly the most detrimental effect of child marriage is on the health of the young wife.

Child wives are at greater risk of contracting HIV and other sexually transmitted diseases than unmarried, sexually active girls of the same age, often because they lack the confidence and are not empowered to say no to unsafe sex.

A future of poverty

But it is the future prospects of these children and their offspring which is even more concerning to Girls Not Brides, as the custom perpetuates the cycle of poverty.

Most young brides drop out of school to attend to the home and are therefore unable to change their economic circumstances. They in turn pass the scourge of poverty on to the next generation.

“Beyond the numbers, this is about the human rights and squandered potential of hundreds of millions of girls and the women they become,” said Robinson.

One of the initiative’s aims is focus greater international visibility on the custom and to get world leadership involved in the issue of child marriage, something which is still lacking.

“I find it astounding that this issue does not receive far greater attention. Together, we and our partners commit to working together to end it,” blogged Tutu.

The sprightly cleric, who celebrated his 80th birthday on 7 October although he only retired in 2010, remains an iconic figure on the world stage.

He is often called upon to add add his effervescent spirit and moral authority to causes ranging from press freedom to the state of health of the world’s oceans.

In 2009 he received a UN Millennium Development Goals lifetime achievement award for his services to humanity.

In 2011 he received the Fifa Presidential Award for his role in uniting the nation ahead of the highly successful 2010 World Cup in South Africa, and embodying the spirit of the Beautiful Game.

He convened The Elders in 2007 with compatriots Nelson Mandela and Graça Machel. This is an organisation of world leaders who use their experience and integrity to tackle some of the world’s most pressing problems.

In 1988 Tutu and his wife Leah founded the Desmond Tutu Peace Centre, a non-profit organisation with the sole aim of promoting and enabling peace around the world.

He was the first black secretary-general of the South African Council of Churches, a post he took up in 1978. In 1986 he was appointed as the Anglican Archbishop of Cape Town.

Tutu was the chairperson of South Africa’s Truth and Reconciliation Commission from 1995 until it submitted its final report in 1998.