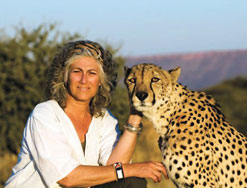 The majestic cat’s numbers are dwindling,
but Laurie Marker’s pioneering work is
pushing it towards future survuval.
(Image: Tyler Prize)

Namibia-based conservationist Laurie Marker, co-founder of the Cheetah Conservation Fund, is one of two recipients of the 2010 Tyler Prize for environmental achievement.

She shares the accolade with academic Stuart Pimm, the Doris Duke Professor of Conservation Ecology at Duke University in Durham, North Carolina. Pimm is also a regular National Geographic blogger.

The prize is administered by the University of Southern California (SoCal). It honours those who have excelled in the fields of environmental science and environmental health and energy for the benefit of animals and humans alike.

As laureates, Marker and Pimm will deliver their public lectures on 22 April at SoCal’s Davidson Conference Centre.

The prestigious award is worth US$200 000 (R1.5-million) and includes a gold medallion. The late philanthropists John and Alice Tyler established the prize in 1973 with the help of then Californian governor Ronald Reagan.

Marker received the prize for her “work in south-west Africa to address the social and economic needs of subsistence livestock farmers and, at the same time, to protect the endangered cheetah and to restore farmland and wildlife habitat”.

Tyler laureates have consistently drawn the world’s attention to environmental issues, ranging from innovative treatment for polluted water, the study of orang-utans and rice genetics, control of mealybug in Africa by a parasitic wasp, to biological methods of controlling mosquitoes and flies.

Based in Otjiwarongo, Namibia, the non-profit Cheetah Conservation Fund (CCF), operating under the patronage of former Namibian president Sam Nujoma, was founded in 1990 with the aim of protecting the magnificent cat and ensuring its survival. It achieves this through partnerships that focus on research, education and effective management strategies.

One of these strategies involved the establishment of guard dog patrols on farms, as a non-lethal way of controlling cheetah attacks on livestock. Marker’s research showed that cheetahs would rather catch their natural fleet-footed prey than feast on sluggish livestock, and that the cat is effectively deterred by guard dogs, preferring to flee than to fight.

The CCF now breeds Anatolian Shepherds and Kangol dogs, both of Turkish origin, to assist farmers in deterring cheetahs and jackals. The puppies are sent to farms at just eight weeks, and grow up alongside their new charges, developing a strong bond with them.

The CCF has also successfully combined the economic needs of humans with the natural needs of cheetahs, by implementing a scheme to clear grazing land and wildlife habitats of an invasive thorny weed and turn the unwanted plant matter into fuel.

The large thorny bushes hinder a cheetah’s swift dash across the veld in pursuit of prey, and also limit its ability to clearly see its prey. But thanks to the innovative process that converts the bushes into wood briquettes called Bushblok, 20 Namibians now have work and cheetahs have more open space in which to run.

The US-born Marker obtained her degree in biology from the Eastern Oregon State University, and later a PhD from Oxford. She is viewed as a world authority on cheetah biology, with a career spanning more than 30 years. Her passion for cheetahs was ignited while working in the veterinary clinic at a zoological park in Oregon, and was fuelled during a later fieldwork stint in Namibia.

She has worked with conservation organisations across the world, including the International Union for the Conservation of Nature (IUCN), where she is a member of the cat specialist core group and the conservationist specialist group.

She has also worked with the Association of Zoos and Aquariums, and is a member of the Namibian Large Carnivore Management Association, the Society of Women Geographers, and the Veterinary Association of Namibia, among others.

A multi-award-winning conservationist, Marker has either authored or co-authored over 40 scientific articles. Former US ambassador to Namibia Jeffrey Bader spearheaded her nomination, describing her as “a force of nature”.

The cheetah (Acinonyx jubatus) is currently native to South Africa, Namibia and 19 other sub-Saharan African countries, but its distribution is growing sparser by the decade.

It is confirmed as extinct, or possibly extinct, in a number of other African and Asian countries, but has successfully been reintroduced to Swaziland.

It is also found in south-west Asia, with a very small population of the critically endangered Asiatic sub-species surviving in Iran. The global population is estimated at around 12 400, but the IUCN reports that this number is dwindling.

The cheetah is most abundant in Eastern and Southern Africa, with the biggest and healthiest population – around 2 000 individuals, according to the IUCN – occurring in Namibia.

The animal is listed as vulnerable with the IUCN and appears in Appendix 1 of the Convention on International Trade in Endangered Species. Appendix 1 applies to species that are threatened with extinction, and it prohibits their international trade, unless it is for non-commercial purposes such as scientific research.

The biggest threats to the big cat’s survival are habitat loss, depletion of prey, and as a consequence of this factor, conflict with farmers, especially in Southern Africa. Cheetahs are often killed indiscriminately because they are incorrectly perceived as a major threat to livestock.

Lesser threats include snares and competition with other large predators, especially other big cats.