The Africa Institute of South Africa hosted
the Africa Day celebrations at the National
Cultural History Museum in Pretoria on
25 May 2011. 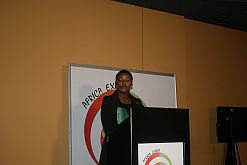 Lindiwe Ngcobo of the IMC spoke about
the importance of positioning Brand Africa
internationally in order to attract investors. 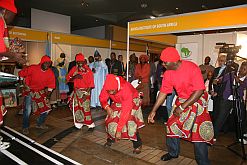 South Africa celebrated Africa Day on 25 May 2011 with a vibrant line-up at the National Cultural History Museum in Pretoria. Focus areas of this year’s festivities included progress on the continent over the past 48 years and empowering the nation’s youngsters for a more sustainable future.

The theme for this year’s event was Accelerating Youth Empowerment for Sustainable Development. Speakers at the proceedings emphasised the need for African countries to share skills and empower their young people to see greater development on the continent.

The IMC’s Lindiwe Ngcobo said: “Education is a strong reputation-driver: not just for South Africa, but for Africa as a continent.”

With South Africa now part of the Brics economic bloc, the spotlight is on Africa to represent itself on a global scale, she added. “Our commitment to youth development will form part of how we are judged by other nations as potentials for investment.”

Ngcobo said it was important for the continent to shape its image and to set an agenda that will drive its reputation and competitiveness.

“We need to showcase not only South Africa as a dream destination for tourism, culture, trade and investment, but also highlight the pertinence of positioning Brand Africa to the rest of the world.”

Africa Day is held every year to commemorate the formation of the Organisation of African Unity in 1963. The organisation, now known as the African Union, was founded by leaders of 30 of the 32 independent African states who signed a founding charter in Ethiopia’s capital city of Addis Ababa.

Nicasius Achu, a researcher at the Africa Institute of South Africa, said his organisation decided to host the event to showcase different African cultures.

“We don’t know our potential as African countries. We should expose ourselves to our different countries and find out what resources we have and how we can help each other, and encourage inter-country trade.”

He said Africa Day should be a day for Africans to reflect and think about how they can enhance and develop the continent. “It’s a day for us to consider how we can make Africa more attractive, how we can promote our continent to the world.”

The 25 May event was packed with vibrant art, music, dance, craft and literature emanating from different countries on the continent.

The Ethiopian embassy handed out samples of the country’s best foods, teas and coffee, while the Nigerian embassy also had a food-tasting session with its top delicacies on offer.

Botswana’s Galefele Thedi said she believes Africa Day should be a day when Africans celebrate all their unique cultures being united under one continent.

Uniting and growing the continent

“We should use this day to show solidarity as the African continent,” said Khaled Aberra, first secretary for the embassy of Eritrea. “We should use this opportunity to enhance our relationships so we can form stronger bonds and try to face the challenges some of our neighbours are struggling with.”

South Africa’s Pumla Ntsele said for her, Africa Day is a day to celebrate being African. “Coming from a major city like Johannesburg, I celebrate the growth of the continent. Johannesburg is one of the major African cities leading African development.”

In closing, CEO of the Ditsong Museums Makgolo Makgolo encouraged everyone to take time to learn more about Africa and the different countries’ history and cultures.

“There is no better place for the celebration of Africa Day than here at the National Cultural History Museum. If you want to know about people, go to a museum,” he said.