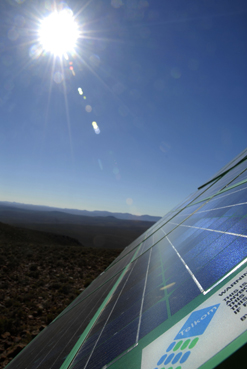 African companies could invest in clean
energy technology such as solar panels to
earn carbon credits, which they would the
sell to more polluting industries.
(Image: Graeme Williams,
MediaClubSouthAfrica.com. For more
free photos, visit the image library.)

The investor buys the right to pollute by helping someone else not to pollute.

Projects that come under this scheme, known as the Clean Development Mechanism (CDM) include tree-planting, and renewable wind and solar energy initiatives, which help cut greenhouse gases.

Africa-based projects currently make up about 4% of a nascent industry that already turns over US$57-billion (R450-billion) a year. Entrepreneurs in Africa say the continent cannot afford to fall behind.

“The lack of ownership by African investors is one of the major constraints for the future development of this continent,” said Thierno Bocar Tall, director of a regional biofuel and renewable energy project. “This market is destined to grow, and Africa, particularly its private sector, must develop a larger presence in it.”

Sub-Saharan Africa produces less energy than Spain, leaving about 500-million people without electricity, according to Dana Rysankova, a World Bank energy specialist in the Africa Department.

But to even begin meeting their own energy needs, African governments will need to dedicate 6% of their annual budgets to their energy sectors, she said.

About 3 200 low-emissions energy projects have been identified across sub-Saharan Africa, which are seeking investments of $175-billion (R1.4-trillion).

If financed, officials at the UN Framework Convention on Climate Change says these projects have the potential to cut global carbon emissions by more than 700-million tons per year, while quadrupling sub-Saharan Africa’s current level of energy production.

The World Bank recently signed Senegal’s first CDM with the state-run Rural Electrification Agency to provide 1.5-million energy-efficient light bulbs to families in rural areas. Investors and entrepreneurs have identified 24 other projects across the country, including a wind farm in Saint-Louis 185km from Dakar, which aims to reduce the country’s gas and diesel dependency by producing 30 000 MW of energy a year.

The UN Environment Programme (Unep) has invested $30-million (R235-million) in building up local expertise in carbon trading in Africa.

“Africa has an enormous potential to be eligible for more investment,” said Bakary Kanté of Unep.

For Mario Lundovic, an adviser at the African Development Bank, most African banks are too small to interest large-scale carbon reduction projects.

Private-public investment partnerships are complicated to pull off anywhere, but particularly in Africa, according to Moctar Diaw, director of sustainable energies in the Senegalese cement industry.

He says he wants to reduce how much energy his industry uses, but finding investment has been tough.