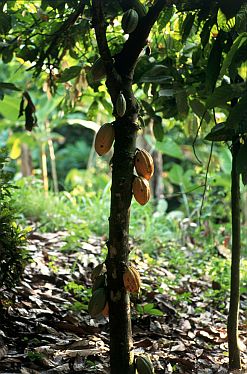 Cocoa pods grow on the trunk, not the
branches. (Image: Unicef) 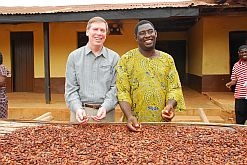 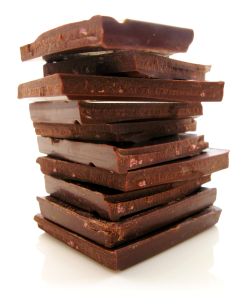 Cadbury Dairy Milk in the UK and Ireland
is the first major brand to switch to the
Fairtrade scheme. (Image: stock.xchng)

Confectionery giant Cadbury has made a landmark stride towards bringing progress and stability to the lives of poor farmers in the developing world, by becoming Fairtrade certified for its best-selling Dairy Milk brand. This means that cocoa farmers in West Africa will secure better deals for their produce.

Cadbury has leaped ahead of rivals privately-owned Mars and Swiss-based Nestlé in adopting the Fairtrade standard for one of its major brands.

Chocolate lovers no longer need feel guilt as they unwrap their favourite snack, because they will be helping cocoa farmers with every purchase. While only chocolates sold in the UK and Ireland will be immediately affected by the switch-over to the ethical standard, the company hopes this is just the start of what will become a global initiative.

The UK-based confectioner announced in March that from mid-2009 it would triple the amount of Fairtrade cocoa it sources from Ghana. The West African country produces what is recognised as the highest quality cocoa on the market.

Cadbury established cocoa farms in Ghana over a century ago and uses only Ghanaian cocoa in its chocolate products sold across the UK and Ireland. Ghana produces more than 600 000 tons of cocoa annually, of which 15 000 tons will be snapped up by Cadbury at a guaranteed minimum price – even if the open market price falls below this level. And farmers will receive a premium for superior quality beans.

Both existing certified cocoa producer groups as well as farmers new to the scheme stand to benefit from the deal. An initial 40 000 of Ghana’s 700 000 cocoa farmers will reap a rich harvest from Cadbury’s new venture, and it is hoped that this will encourage more young people to invest their time and effort into farming and thus revitalise the industry.

Cocoa is the country’s biggest cash crop and, having survived a near-collapse in the 1970s and 1980s because of mismanagement, competition from other cocoa-producing nations and rising costs, among others, the industry faces new challenges in the 21st century. Deforestation has resulted in less land that is suitable for cocoa cultivation, and young people are leaving rural areas to seek better fortunes in the cities.

Cadbury CEO Todd Stitzer said it was a historic moment for the company, and that he was extremely proud that the top-selling Dairy Milk brand now operates under the Fairtrade banner. “We believe that by joining forces with the Fairtrade Foundation, we can further improve living standards and conditions for farmers and farming communities, and create a sustainable supply of high quality cocoa for Cadbury.”

The initiative marks the first anniversary of the Cadbury Cocoa Partnership of local governments, farmers and communities, established in January 2008. Partners work together to secure a sustainable socio-economic situation for over one-million cocoa farmers in Ghana, India, Indonesia and the Caribbean.

The partnership will see R639-million ($62-million) invested in these regions, with R426-million ($41-million) allocated to Ghana. Part of its programme involves helping farmers to organise themselves into formal groups so that they can achieve Fairtrade certification and become eligible to trade with Cadbury on Fairtrade terms.

The Fairtrade philosophy is aimed at securing better prices and decent working conditions for commodity farmers and workers in the developing world, and contributing to local sustainability and fair terms of trade.

Conventional trade often discriminates against poor farmers who do not have a strong position when it comes to negotiating, and those who sell their produce under Fairtrade conditions can rest assured that they will not be unfairly exploited. Fairtrade enables them to improve their position and have more control over their lives.

The Fairtrade Foundation is an organisation that strives to promote the principle of fair trade and to strengthen the position of producers, with the result that the lives of communities are improved on a sustainable level.

The foundation is responsible for issuing the Fairtrade mark for products sourced from producers who comply with internationally recognised Fairtrade standards – these cover social, economic and environmental issues. It works with similar initiatives in 20 other countries to form a global network known as Fairtrade Labelling Organisations International, which is headquartered in Bonn, Germany.

Currently some 7.5-million farmers and their families and communities in 59 developing countries around the world benefit from products that display the Fairtrade mark.

South Africa’s Heiveld Co-op, a group of rooibos growers, is certified under the Fairtrade Labelling Organisations’ standards for rooibos. Since joining the scheme, the farmers’ income has now tripled from about R13 ($1.3) per kg to R39 ($3.8). 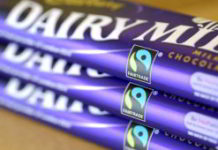