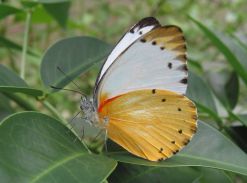 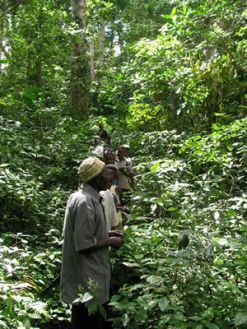 Tanzania’s East Usambara Mountains are
home to extensive forests and a large
number of animal and plant species found
only in that area, making it one of the
world’s biodiversity hotspots.
(Image: Amani Butterfly Project)

When one thinks of farming, butterflies are not the first commodity that comes to mind. But in Tanzania, this unlikely crop is cultivated to help conserve threatened forests and provide an alternative income to more than 250 farmers.

Tanzania’s East Usambara Mountains are home to extensive, verdant forests and a large number of animal and plant species found only in that area, making it one of the world’s biodiversity hotspots.

Now seriously threatened by human development and natural habitat destruction, the slopes have become attractive places to farm: an increasing number of people have settled in the mountain villages and forests are being cleared to make way for tea estates and small farms.

Forests have also come under pressure as a source of building supplies, charcoal, and firewood.

The main cause of butterfly extinction is habitat destruction. By providing an economic incentive to preserve this insect’s habitat, the Amani Butterfly Project is helping to save butterflies as well as other plant and animal species found in the East Usambara Mountains.

The Amani Butterfly Project works with rural Tanzanians from villages in the area.

According to project manager Amiri Saidi, the main goal of the initiative is to find an alternative income for local communities living in the mountain area and also reduce timber cutting in the forest.

Traditional conservation efforts haven’t been as successful and often resulted in more poverty in communities who earn a living from logging and farming in the forests.

The Tanzania Forest Conservation Group started initiatives such as the Amani Butterfly Project to incentivise locals to conserve forests, while also earning an alternative income.

Participating farmers, of which more than half are women, receive about 65% of sales of butterfly pupae to overseas markets. The remaining 30% in earnings covers the project’s staff salaries and operating costs.

About 5% to 7% of profits are set aside for a community development fund which is used to finance projects to would benefit the whole community, such as building schools and hospitals.

Butterfly farming is supplementing the income of many needy households. Some families earn less than US$400 (R31.75) a year but with the new venture, the average household has seen a 25% increase in income.

The main market for these colourful insects are butterfly farms and zoos in the UK, US and Europe.

The main limit on increasing sales is the relatively small size of the live butterfly exhibit market.

To help increase the market for farmed butterflies, the project is looking to create butterfly souvenirs for the tourist market in Tanzania and gift shops of live butterfly exhibits in Europe and the US.

The project has been experiencing problems with courier companies that have suspended their service to transport pupae to overseas buyers.

This has delayed deliveries and increased the cost of transporting pupae using air cargo. However, they are in discussions with the courier to resume deliveries.

The process starts by capturing a few female butterflies from the forest and placing them in an enclosure with plants. Here they can fly and lay eggs. Each butterfly species uses a different host plant.

Once the eggs hatch, farmers place the larvae on plants cultivated in host plant nurseries. Many butterfly species prefer seedlings to lay eggs and farmers rely on the forest as a regular source of seeds for their nurseries.

The butterfly farming process also has no negative impact on the health of wild populations as very few wild butterflies are removed from forests.

A single female butterfly can lay between 250 and 500 eggs in her lifetime, so very few female butterflies are required to start captive populations.

He says that studies conducted by the project show that butterfly farmers are taking ownership of forest conservation.

“Because butterfly farmers rely on forests near their communities to provide host plants for their butterfly farms, many farmers now support forest conservation,” he says.