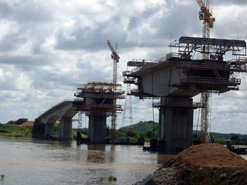 The Zambezi Bridge in central
Mozambique under construction. Set to be
officially opened on 1 August, the
2.5-kilometre bridge is the second-longest
in Africa.
(Image: André Catueira, PlusNews)

The newly completed Zambezi Bridge in central Mozambique, the second-longest in Africa, has been both a “feat of technical engineering” and a valuable lesson in limiting the negative impact of huge infrastructure projects on vulnerable communities, Save the Children said in a statement released on 29 July.

“In response to concerns raised by members of nearby communities at the start of the construction, it has also been accompanied by mechanisms of social protection for vulnerable families that have also been impressive.”

There will be much to celebrate when the bridge linking the north to the south of the country is officially opened on 1 August, making it possible for trucks, buses and cars to cross the Zambezi River in a matter of minutes instead of having to wait several days for a dilapidated ferry system.

When construction of the new 2.5-kilometre bridge began in 2006, Caia in Sofala province and Chimuara in Zambezia province – the villages on opposite sides of the river – worried about the possible negative impact of thousands of migrant workers and heavy construction machinery suddenly arriving.

“With money to spend and without their wives and families, these workers often engaged in sexual relations with young girls and because of poverty and economic deprivation, certain families colluded and sometimes encouraged these relationships,” said Chris McIvor, Save the Children’s advocacy director in Mozambique.

The communities of Caia and Chimuara had already suffered as a result of being located on the main route connecting Mozambique’s 10 provinces, national highway number one (EN1): government figures put HIV prevalence at about 20% in both.

“With HIV/Aids such a huge risk, poor families can be left in an even worse position than if the infrastructure project had not materialised,” McIvor said. “Girls in Zambezia, for example, told us how they had been abandoned by their ‘new boyfriends’ the moment they announced their pregnancy.”

Based on its experience of other infrastructure projects in Mozambique, where child abuse and exploitation had occurred, SC conducted a study, The Zambezi Bridge – What Needs to be Done, and approached the government, donors and the bridge construction company, which led to a programme for social protection.

McIvor said large infrastructure projects were bound to be part of Mozambique’s ongoing development drive – road, bridge and railway projects were underway in many parts of the country – and the government, private sector and donors would be well advised to learn from the Zambezi Bridge experience.

“Arising from our positive experience of what took place during the Zambezi Bridge construction, we also believe that the social problems that arise on the back of these projects can largely be avoided,” said Save the Children statement.

McIvor said it was crucial to involve community members, including children. “Children are excellent advocates among themselves, so if you convince some children to avoid certain risks – like frequenting bars and discos if they are underage – they are very influential in convincing others.”

Buy-in by local authorities and influential people, such as the police, community leaders, headmasters and teachers, helped ensure that child abuse and exploitation were not tolerated.

It was also essential to offer viable economic opportunities to marginalised community members, “so that they are not drawn into the sex trade or exploitative labour because they are too poor to withstand these pressures,” McIvor said.

The Save the Children statement recommended “training managers and staff of [contracting] companies … on their social responsibilities … and promoting their adherence to codes of conduct that regulate their behaviour and interactions with local people” as essential in reducing the negative impact of construction projects.”