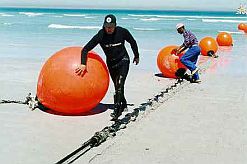 The SAT-3 cable emerges from the waters
at one of its landing points. 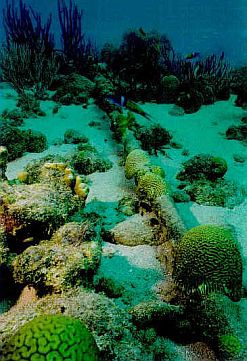 SAT-3 snakes along the seabed on
its way from South Africa to Portugal.

A new study by a US-based investment advisory firm suggests that Africa’s broadband market is set to quadruple by 2012, with the current 2.7-million users soaring to 12.7-million. Aimed at service providers, investors and infrastructure suppliers, the study was conducted in 33 African markets.

Although based in Cambridge, Massachusetts, the work of AfricaNext Investment Research is focused on Africa, specifically on that continent’s telecommunications, media and technology sectors. The company is interested not only in Africa’s largest economies, such as South Africa, Nigeria and Kenya, but also in emerging markets such as Ethiopia and the Central African Republic.

With its report titled 3G, WiMAX, ADSL and the Future of African Broadband, the company aims to dispel the pessimism that has pervaded the broadband sector in recent years. AfricaNext attributes the low incidence of broadband penetration in Africa until now to a variety of factors such as expensive services, high prices for international bandwidth, dilapidated infrastructure, and restrictive regulatory frameworks.

However, a number of new, more positive factors are coming into play at the same time, says the company, and suddenly the future of broadband in Africa is looking much brighter. In fact, the continent should prepare itself for a surge in broadband growth over the next four years.

In spite of the traditionally gloomy outlook for mobile business models in Africa, AfricaNext argues that 2009 is likely to be the start of greater things for the telecommunications sector. Broadband operators, equipment suppliers and investors may well find that 2009 presents an excellent opportunity for returns.

In fact, it may be the most significant opportunity since the recent mobile voice boom, where mobile subscribers mushroomed over nine years from 2-million in 2000 to 270-million. And the tipping point could be as little as 12 months away.

The report also singles out Huawei Technologies as a major influence on future developments. The networking and telecommunications equipment supplier is the largest such company in the People’s Republic of China. Huawei has spent the last decade making substantial investments in Africa and is now a next-generation communications equipment supplier to more than 30 countries on the continent.

With more than 2 000 employees, over 50% of whom are recruited locally, Huawei has set up training centres in Nigeria, Kenya, Egypt, Tunisia, and most recently, South Africa. Located in Woodmead, Johannesburg, the newest training facility opened in August 2008. A sixth training centre is under construction in Angola.

A slew of new submarine cable developments will bring faster internet access to areas in Africa that were formerly deprived. East Africa, particularly, is the only region in the world that has no link to international communication networks, except through satellite communication. Because this technology is expensive, it has hindered business growth as well as development in vital areas such as education.

West Africa has high-speed connectivity through the SAT-3 cable but this, too, has been more expensive than necessary because the consortium that controls SAT-3 has kept prices high.

Seacom is planning to launch its cable in June 2009, just in time for the Fifa Confederations Cup, while Eassy is on track for completion by the time the long-awaited 2010 Fifa World Cup kicks off. Countries from South Africa all the way up to Sudan, as well as a number of land-locked countries, will benefit from fast and cheap bandwidth once the cables come into operation.

Alcatel-Lucent, who control the Teams cable, have announced that laying of the cable should be complete before mid-2009. Teams will link the port city of Mombasa in Kenya to Fujairah in the United Arab Emirates.

Other submarine cable developments include the Middle East North Africa project that will connect Egypt and a number of Middle East and Mediterranean countries, as well as Main One, which will link Portugal to South Africa with landing points along the continent’s west coast. The latter project will be implemented in two phases, both of which are scheduled for completion in May 2010.

The West Africa Cable System will link Cape Town to the UK via at least 10 other countries. It was scheduled for completion in 2010 but reports are now hinting at 2011.

The emergence of cutting-edge wireless technologies such as EVDO and WiMAX have also opened up internet access where cable-laying is impractical, says AfricaNext.

Evolution Data Only/Evolution Data Optimized is a technology that allows users to connect wirelessly to the internet without having to be near a hotspot. The EVDO card provides instant and direct access, wherever the user may be at the time.

WiMAX, or Worldwide Interoperability for Microwave Access, is a powerful wireless access standard that provides broadband speed without the need for direct line-of-sight to a base station. Since it offers high bandwidth at a low cost, experts predict that WiMAX will become the dominating wireless broadband access standard in the next few years.

Data gathered by AfricaNext shows that there were about 2.7-million broadband subscriptions at the end of 2007. Of these, 90% were located in Egypt, South Africa, Morocco, Nigeria, Algeria and Angola. The company now estimates that by the end of 2012 the number of subscriptions will have increased fourfold to 12.7-million.

In terms of general internet use, the African continent had between 45-million and 55-million users at the end of 2007. This represents just 3% of the world’s total and a 5% penetration of the population. AfricaNext projects that this number will reach over 100-million by 2012.