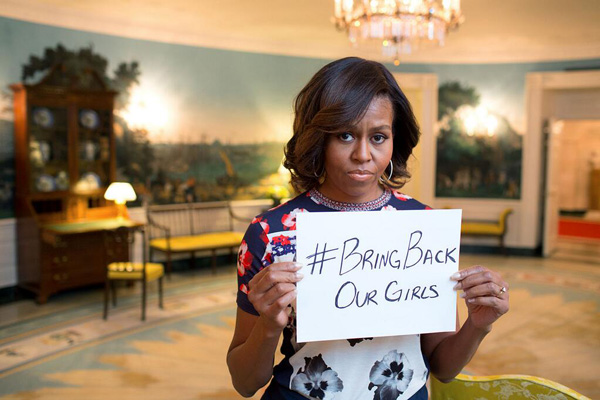 Michelle Obama tweeted: “Our prayers are with the missing Nigerian girls and their families. It’s time to #BringBackOurGirls.”

Social media’s potential as a powerful agent for change and conflict resolution in Africa is being demonstrated by the hugely viral #BringBackOurGirls online campaign to rescue 276 Nigerian schoolgirls abducted by Boko Haram Islamist militants.

The campaign began spontaneously, with no central organisation, after Boko Haram – the group’s name roughly translates as “Western education is forbidden” – kidnapped the girls from a school in the northeastern Nigerian town of Chibok. Over the years the jihadist militants have targeted schools as well as churches, mosques, government buildings and security forces.

In early May Boko Haram leader Abubakar Shekau released a video claiming responsibility for the abduction, saying “Allah instructed me to sell them.”

Nine days after the attack, on 23 April, Oby Ezekwesili, vice president of the World Bank for Africa, gave a speech in Nigeria in which she urged the government to intervene and “bring back our girls”. Soon after Twitter users in Nigeria began to repeat her call, adopting the hashtag #BringBackOurGirls.

The first to use the hashtag was Ibrahim M Abdullahi, a lawyer in the Nigerian capital of Abuja:

“This was not a coordinated campaign,” he told the BBC. “It was a number of individuals in Nigeria tweeting to raise awareness in the hope that the international community would eventually take notice.”

Just over two weeks later, the #BringBackOurGirls viral campaign has gone from local to massively global, being tweeted over 1-million times, according to #BBCTrending. And it has moved from the internet to the streets, with marches and demonstrations across the world under the banner #BringBackOurGirls.

Protests have been held in Abuja, Washington DC, Houston, New York and London, with more are being confirmed on a daily basis.

South Africans held their own #BringBackOurGirls rally in Johannesburg on Thursday 8 May 2014 to add their voices to the growing international outrage.

Protesters marched from Sandton City to the Nigerian Consulate in Illovo to demand that the government of that country deploy more resources, attention and focus on liberating the abducted girls.

Rosie Motene, a women’s rights activist and one of the organisers, said: “We’re tired of the rest of the world being silent about such an important issue. When it happened in Congo, we didn’t step up to the plate. It’s important to understand that this isn’t just a Nigerian issue – it’s a terrorism issue. It could happen anywhere in the world. It happened to Malala Yousafzai in Pakistan, who was shot in the head for pursuing an education, and now it’s happened in Nigeria.

“It’s also important to stress that Boko Haram is a terrorist organisation, not an Islamist one – this is not the way of Islam.” 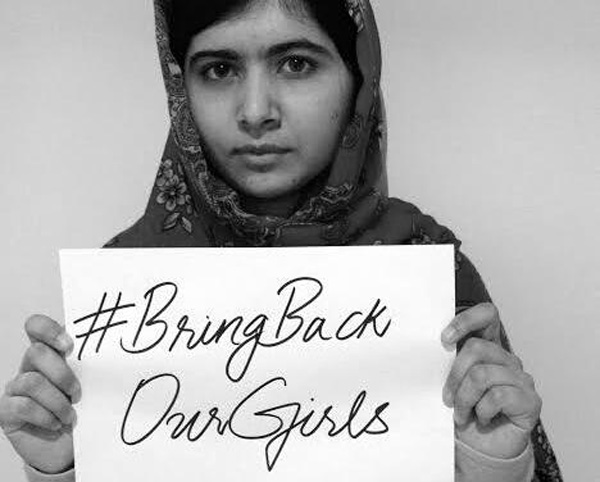 Malala Yousafzai said the kidnapped students were her “sisters”

The campaign is now yielding results, with the US, Britain, France and China sending experts to help the search.

“We have already sent in a team to Nigeria,” US President Barack Obama told ABC News on Wednesday 7 May. “This is a combination of military, law enforcement, and other agencies that are going in, trying to identify where in fact these girls might be.”

Obama described the abductions as “heart-breaking” and “outrageous”.

“This may be the event that helps to mobilise the entire international community to finally do something against this horrendous organisation that’s perpetrated such a terrible crime,” he added.

Today Lulu Xingwana, South Africa’s minister for women, children and people with disabilities, added her voice to the outcry. “Our prayers and thoughts are with the people of Nigeria especially the families of the schoolgirls during this difficult time,” she said in a statement. “We call on their captors not to allow any harm to befall the children and to hand over the girls to authorities so that they can be safely reunited with their families.” 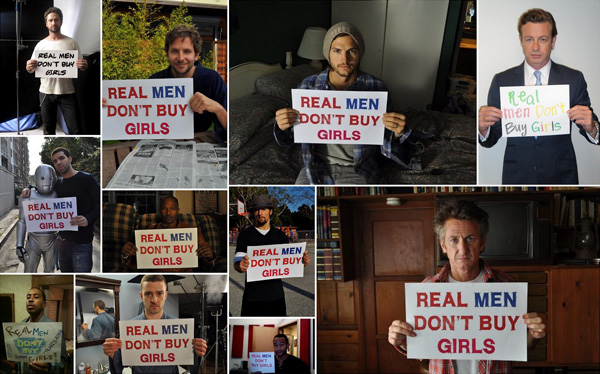 A three-year-old viral campaign, #RealMenDon’tBuyGirls, has been revitalised in support of the Nigerian schoolgirls

International leaders and celebrities have taken to Twitter, Facebook and Instagram to pledge their support for the girls and pressure the governments of the world to help rescue them.

US first lady Michelle Obama tweeted: “Our prayers are with the missing Nigerian girls and their families. It’s time to #BringBackOurGirls.” She included a photo of herself in the White House holding a placard with the hashtag.

Malala, who became a leading global advocate for girls’ education after surviving an assassination attempt by the Taliban, is holding a #BringBackOurGirls sign in the Twitter profile picture of her organisation. In an interview with CNN she said the kidnapped students were her “sisters”.

Music mogul Sean “Diddy” Combs has been filling his Instagram page with signs of #BringBackOurGirls. A three-year-old viral campaign, #RealMenDon’tBuyGirls, has been revitalised in support of the Nigerian schoolgirls, with social media being flooded with photos of US celebrities such as Sean Penn, Justin Timberlake and Ashton Kutcher holding signs with the hashtag.

Boko Haram militants oppose what they call the “Westernisation” of Nigeria, a country with a largely Christian south and Muslim north. Since 2009, thousands have been killed by the group, which has the stated aim of overthrowing the country’s government.

Attacks have increased in 2014, with an estimated 1 500 deaths attributed to the group this year alone. In February, Boko Haram hacked to death more than 100 Christian men in the villages of Doron Baga and Izghe. In the same month, 59 students were killed at the Federal Government College in northeastern Nigeria.

The abduction of the schoolgirls took place on the same day a bombing attack in Abuja killed at least 88 people. The US government claims al Qaeda training in recent years has helped Boko Haram intensify its attacks.